This is Part One of a two-part series focusing on the process of making Kentucky football successful. Part One compares Kentucky's just concluded season to its 2012 season, and then looks outward to compare Kentucky to other recently rebuilt football programs.

Share All sharing options for: Building a Viable Football Program At Kentucky

The 2013 Kentucky football campaign is difficult to assess. If one were to ignore the record, there were multiple positive developments. For example, talented underclassmen had promising seasons and seem poised to contribute in the future. Perhaps most importantly, the team competed in every game from start to finish except for maybe the Georgia game. That's a welcome change from the past. Several players stated after the Tennessee game that there are positive changes taking place off the field even if their results aren't represented by more victories. Meanwhile, recruiting is still on a roll, most likely somewhere between Elizabethtown, KY, and some godforsaken corner of Ohio.

Yet for as many qualitative positives as there were, the team still went 2-10, and this fact can't be ignored. The recently completed season revealed the football program's turnaround will take far more than new coaches, new schemes, and a single year of strong recruiting. The program remains in pretty bad shape despite the efforts to date. While the raging dumpster fire has finally been put out, its charred, desiccated ruins are still an eyesore.

The raw performance statistics speak to this football programs current state of disrepair. They demonstrate the offensive and defensive performances roughly match last season's output with minor exceptions here and there. Hank helpfully updated these statistics on a week-to-week basis throughout the season. Recently, Kyle Tucker at The Courier-Journal compiled the following data from this season and last: 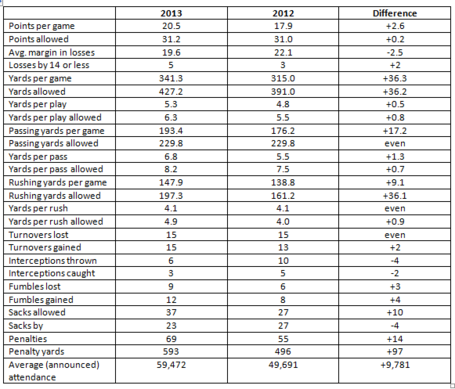 Pretty disheartening. The offense was marginally improved both passing and running the ball, but that's about the only positive to take away from this. The team gave up more sacks, and turned the ball over more. Meanwhile, the defense caused more turnovers, allowed fewer points and passing yards per game, but gave up far too many yards per game for the team to be competitive. The defense prevented fewer total points, but its overall performance destroyed the remote possibility of handing the offense solid field position most of the season.

The opponent adjusted stats corroborating the raw data reinforces previously held notions. UK was a slightly better football team this year - despite the same record as last year - but not by much. Overall F/+ improved from 112th to 98th. Most of the improvement is represented by the offense which climbed from the moribund 104th position to the simply depressing 76th. Special teams actually got worse.

Ascending to the Next Tier

So, UK seems slightly better. Is this a harbinger for even better seasons ahead? The following seeks to provide clarity by comparing UK to programs that have already taken the path ahead of Coach Stoops and his staff.

This chart is packed with lots of things to discuss. In the "Year -1"section, these schools all lost roughly thirty percent of their games by 14 points or less in the year prior to their new coach. This speaks to the relative lack of competitiveness in the vast majority of their losses. This is reinforced by the 3 touchdown average margin of loss they all share. Meanwhile, only the prestige programs, Michigan and Auburn, have strong recruiting classes - though Houston Nutt's last Ole Miss signing class does pretty well too. Kentucky's small senior class is a sign of roster mismanagement, and these schools shared that problem though it is not as pronounced. The poor records of these schools reflect these realities.

The "Year 0"section encouragingly displays commonalities. Kentucky's 2-10 record is the worst of the bunch, but Kentucky's number of games lost by 14 points or less rose to the fifty percent threshold consistent with most of these other teams. The good news is Kentucky's recruiting was stellar last year for a team in "Year 0". Rising recruiting rankings can alleviate a lot of problems.

By Year +1 the percentage of losses by 14 points or less continues to grow to roughly 75% and margin of loss also decreases. Unfortunately, half the data for what will be Kentucky's 2014 season isn't available, but we can somewhat project the number of seniors and another record-breaking recruiting class. At least two of the four criteria will have improved. That's a promising sign Kentucky will be able to match the remaining variables as well meaning the football program will not be diverted from the path to ascendancy. If UK were to stagnant at this stage of the process then UK teams probably begin to regularly qualify for whatever the AdvoCare V100 Bowl is. December in Shreveport, LA is much better than the current alternative but if the program falters here it could easily backslide to previous stages along the path.

Year +2 displays Kentucky's possible future in the 2015 campaign. By this point, these programs have a solid foundation and have broken through to the next tier of stable and viable football programs. They are healthy and self-sustaining. The defeats become infrequent but are competitive. It's a year like this that serves as a springboard to BCS bids in subsequent years.

These charts underscore three main points. First, successful recruiting can buoy programmatic issues, and tends to allow for speedier reconstruction. Two, building a viable football program occurs incrementally and over years, unless you're a prestige program. And finally, Kentucky's Year -1 and Year 0 (with an arguably tougher schedule) closely mirror these other programs. If trends remain consistent, Kentucky's Year +1 and Year +2 seasons could very well share their trajectories.

For UK to maintain its trajectory and ascend to the next tier of football programs it will have to continue to recruit well. That doesn't seem like it will be a problem at this point. In addition to recruiting, Coach Stoops will also have to fix issues with the existing roster in order to field a team that loses less frequently, and when it does lose, it does so with ever-decreasing margins.

A more in-depth look on fixing the roster, and a discussion on setting goals, is forthcoming in the second part of this series.