Once again, it's time for food, beverages, football, and all the virtual tailgating fun you can have on the Internet.

Welcome to the Week 6 Virtual Tailgate. We're happy to have you with us. Today's game is in Columbia, South Carolina, a state I just left a week ago after a nice vacation at Myrtle Beach. Columbia is about a three-hour drive from Myrtle Beach, and by all accounts is a very nice city. It also happens to be the capital of the Palmetto State.

But the Lowcountry is known for a specific cuisine, and that's where we'll be exploring today. First, we'll get some food, then afterwards, we'll sit around with some cold ones and talk football.

I always like to start out our virtual tailgates with a nice cocktail: 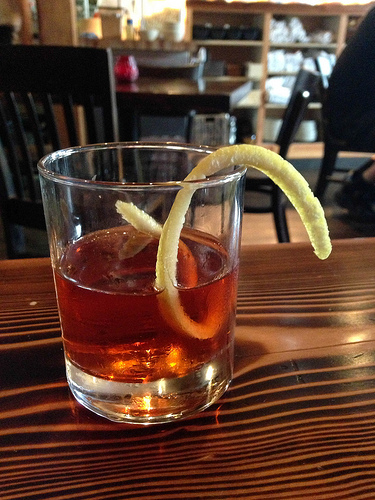 This thing is Bulleit Rye whiskey, sugar, Peychauds, and Absynthe. It was invented in New Orleans, but it's common throughout the south.

Moving on to the appetizer, I can't think of anything better than: 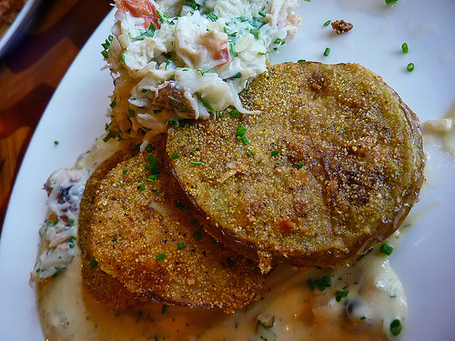 There just isn't anything more Southern than that, and as an appetizer, well, it's just one of the best.

Moving on to the main course, we have to give a serious nod to the Lowcountry: 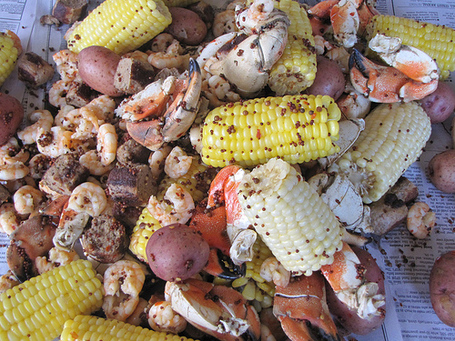 Your basic ingredients are shrimp, crab, sausage potatoes and corn. Then it's everybody into the boiling pot with some seasoning for an unforgettable taste of South Carolina.

For sides, well, we don't need really need them since the sides are a part of the main dish, but we'll add this one: 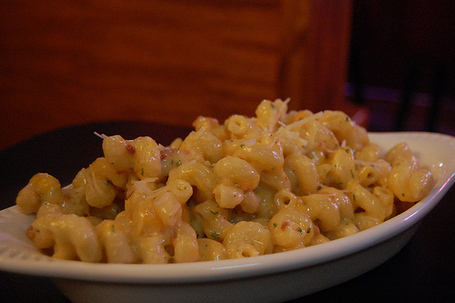 Macaroni and cheese (via stu_spivack)

You loved it as a kid, and you love it now. You know you do.

Of course, every great tailgage meal must include beer. Today, we have my favorite beer for vacation, the one we bring with us in the little 7-oz bottles: 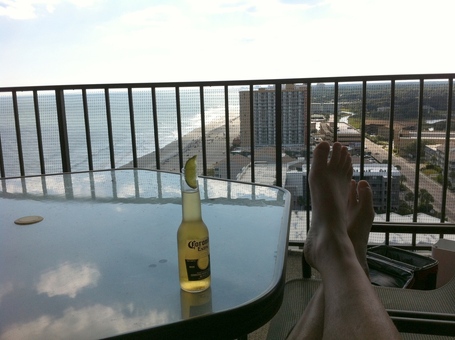 Yeah, that's yours truly taking it easy on the deck overlooking the beach. We did have fun, and drank quite a few of these. For some reason, there is just nothing more refreshing on vacation than sitting out on the deck with an ice-cold Corona. It just can't be beat, and it's good with Lowcountry Boil as well — that's first hand experience talking.  I like the 7-oz bottles because they don't have a chance to get warm.

Finally, a little something for desert: 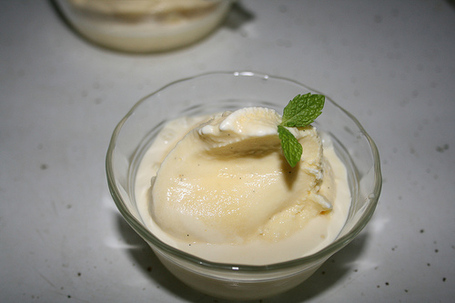 Nothing better on a warm Indian-summer day than some homemade ice cream — maybe banana, or in this case, French vanilla. Nice.

Now that we're fed, let's talk Kentucky Wildcats at South Carolina. As we all know, Kentucky has had no end of trouble dealing with Steve Spurrier's teams since he's been the coach in Columbia, and the Ol' Ball Coach once again has a highly ranked squad full of quality players awaiting Mark Stoops & Co.

Offensively, the Gamecocks have been inconsistent this year. They really didn't impress against Larry Fedora's North Carolina Tar Heels even though they won the game fairly convincingly. They struggled after Connor Shaw went down at Central Florida last game, but Dylan Thompson got it going in the second half to put the Knights away. The Gamecocks, and nearly anyone else, can be forgiven for losing at Georgia, and they handled Vanderbilt despite some struggles to round out their current 3-1 record.

Kentucky is still struggling to find a consistent quarterback, and I have no idea what to expect today, or who will start between Jalen Whitlow and Maxwell Smith. We have seen Kentucky struggle early in the season against Western, explode offensively against a weak Miami (OH) team, and lose convincingly, but stubbornly to the Louisville Cardinals and Florida Gators.  South Carolina presents some opportunities for the offense, but only if the receivers can catch and the quarterbacks can avoid putting the ball in jeopardy.

Let's just get this out of the way — if Kentucky's offensive struggles continue unabated against USC, this could be a very lopsided, uncompetitive game. The defense simply cannot stand up against South Carolina without some significant rest, and that can only happen if the offense can hold onto and move the football. Against both BCS teams UK has played so far, the offense has had execution problems that robbed them of the opportunity to score, from penalties to fumbles to interceptions, sacks, and TFL's. Every time Kentucky gets in or near the red zone lately, bad things happen.

The good news is that South Carolina's defense has been anything but an immovable object. The are currently 11th in scoring defense, 7th in rushing defense, 10th in passing defense and 9th in total defense in the SEC. Keep in mind, however, that USC has not faced any cupcakes so far — no Miamis or Florida Internationals to pad their stats.

Kentucky really has no legitimate shot at knocking off the Gamecocks at home, I won't lie to you. If UK does everything right, they do have a chance to make this a football game, but it's unlikely that they can pull off the upset against a ranked SEC team on the road. Kentucky has just been too susceptible to breakdowns offensively, and the defense, as thin as it is behind the starting players, can only do so much.

Regardless, the Wildcats can make this a ballgame, and you never know what can happen if they do. The Gamecocks may come in overconfident, or careless. We've seen it before. And if Kentucky can score 21 points somehow, or get some very timely turnovers (or both), I think they might have an outside shot at a miracle. But that scenario assumes offensive execution we have yet to see from Kentucky.

Whatever the case, we'll be enjoying the game and hoping for a surprise. It wouldn't be the first.