With March Madness now upon us, there is no better time to talk about national championships. But rather than focus on this year's event, let's look at the past, the distant past, which can still be seen high in the north end of the venerable Allen Fieldhouse.

The NCAA confirms that Kansas has won three national championships: in 1952, 1988, and 2008. That ties the school with Villanova for seventh place on the list of teams with the most national championships. It seems a little silly to re-establish this historical foundation, but this is what you see when you enter the Phog: 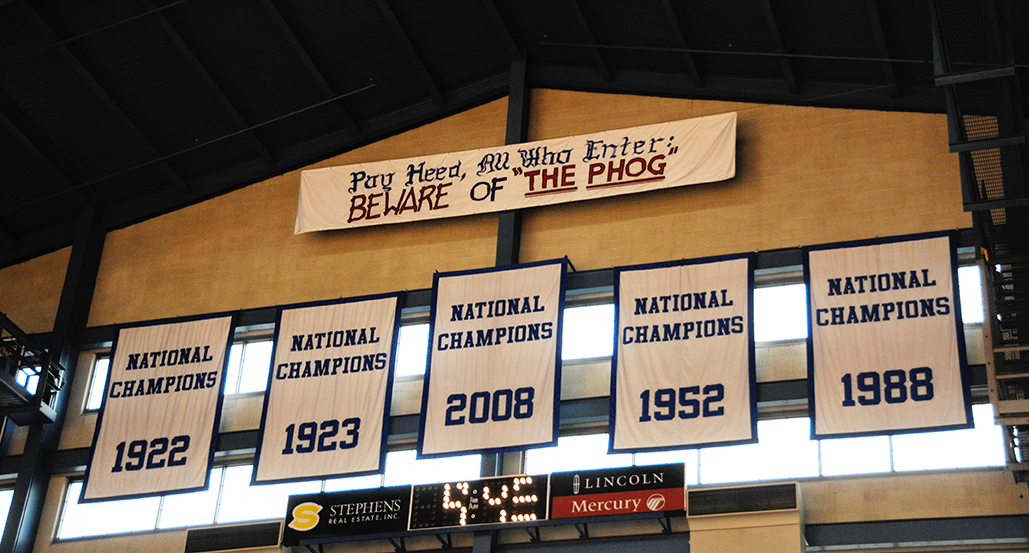 That certainly looks like five national championships, enough to tie the school with Indiana and Duke for fourth place. Something is amiss. And it's not the record books.

In those days, Kansas had no postseason. In Lawrence and across most of the country, the regular season was the only season. When it was over, college basketball came to an end. The idea of holding even a conference tournament was novel.

Colleges typically played a handful of regional teams as well as the occasional YMCA or local club. Kansas filled half its conference schedule in 1919 and 1920 with games against Missouri and Kansas State. Kentucky played a 10-game regular season in 1921 against Cincinnati and schools in Kentucky and Tennessee. College basketball was still young and very much a regional contest, confined largely to opponents who were within an easy train ride.

Limited schedules, a lack of intersectional play, minimal statistics (not to mention limited scoring). It was difficult at best to evaluate the relative strength of teams from different regions. What's more, different regions played under different interpretations of the rules. As Time magazine noted in its February 19, 1934 edition:

College basketball produces no national champion. A winter sport which in some parts of the U.S. amounts to a seasonal hysteria, it is played almost entirely within regional leagues. The argument of each league that it has the best team in the land is more footless than most such controversies, since the strongest teams play on courts of different sizes under rules differently interpreted.

In January 1935 Adolph Rupp publicly floated the notion of a tournament to decide the national championship. In doing so, he lamented the state of affairs in college basketball:

At the end of each season, four or five teams throughout the country lay claim to a mythical national title. If the leading teams of each section would agree to play a round robin tournament in some centrally located city, like Chicago, a sort of Rose Bowl champion in basketball would be crowned each year.

Such a tournament would put an end to conflicting claims to so-called national championships. It would tend to further interest in this sport throughout the country. Furthermore, a more uniform code of rules interpretation, which is sorely needed, would soon be accepted.

I believe there were three teams claiming the national championship in basketball last year. Some attempt was made at Chicago to have these teams play for a championship, but the idea was dropped when the teams refused to risk their mythical title for an undisputed title.

In his remarkably detailed notes on college basketball in Kansas, author Harold C. Evans made no mention in 1942 that the Jayhawks had won any kind of national title in the 1920s. Kansas and Missouri tied for first place in the Missouri Valley Conference in 1922, each winning by 10 on the other's home floor. Kansas would win the conference outright in 1923. A midseason loss to that gentlemen's club in Kansas City kept the school from a perfect season.

But that was the extent of their achievements. Rupp, who was a guard on those 1922 and 1923 Phog Allen squads, was under no illusion that he and his teammates were any kind of national champions. Kansas itself would not even make the claim until decades after the fact.

That's odd, you see, because schools usually know when they've won a national championship. And for the longest time Kansas didn't seem to be aware that its 1922 and 1923 teams had done anything quite so special, and back-to-back no less. What happened all those years later to make the school rewrite its history?

In the early 1940s, a man named Bill Schroeder, a semi-pro baseball player and an avid collector of sports memorabilia, gathered all the information he could find on each of the past college basketball seasons. Sponsored by the Helms Bakery in Culver City, California, he released in 1943 what he grandly called the Collegiate Basketball selections of the Helms Athletic Foundation. These were his considered choices for each year's best team.

It was Schroeder who selected Kansas as the top team in the country in 1922 and 1923. Your starters (see photo caption): Waldo Bowman and Tusten Ackerman, forwards; John Wulf, center; Paul Endacott and Charles Black, guards. Plus a few other names. 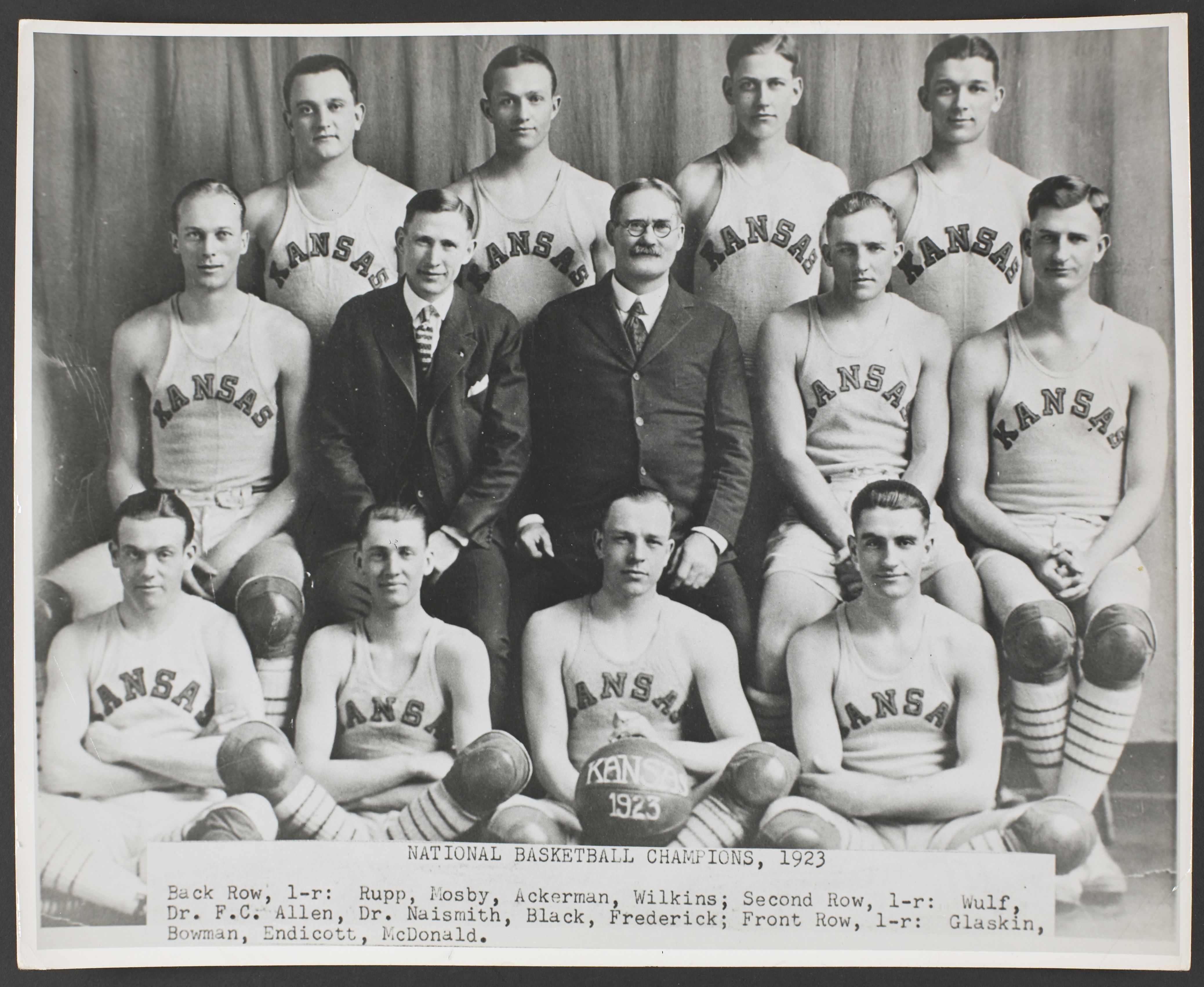 There was no national poll of coaches or sportswriters. Schroeder was free to render a verdict all his own. When he announced his findings, he confessed that choosing the right team was an exceedingly difficult task in a number of cases.

It was a passion well pursued. His efforts appeared to go unnoticed by the schools and the players for many years, but eventually they found a favorable reception. And although his selections were understood to be unofficial, not authoritative, they gave outstanding teams of the past a measure of recognition and respect they did not previously enjoy.

At least 10 schools would raise Helms banners to honor their selected teams. Kansas did something more. Taking care to conceal the presenter of the award, it conveyed to the public, without qualification or context, that its teams were the National Champions of 1922 and 1923. News to them, you can be sure.

Given how difficult it was to make relative comparisons, it comes as no surprise that a different researcher might see things differently. According to the Premo-Porretta findings from 1995, Kansas was not the most outstanding team of 1922 or 1923. They selected instead Missouri (ouch) and Army, respectively. The pair spent decades researching the early history of college basketball, and their rankings reveal that Kansas was never the preeminent team in the pre-tournament era.

To muddy the waters a bit more, the 1934 Time magazine article notes that some enthusiasts still rated Wisconsin's 1923 team as the best of all time. That gives us Kansas, Army and perhaps Wisconsin as the standout team of 1923, depending on whom you ask.

And that rather makes the point: Awards from foundations and research teams don't produce a national champion, even if they say they do. They produce opinions, and naturally disputable opinions are what leave the pre-tournament era in somewhat the same mess that Rupp found it, with different teams laying claim to the same mythical titles.

It takes only a moment to see that the country's top-rated team, in someone's estimation, and the concept of a national champion are not one and the same. We know all too well that the consensus top team – be it Georgetown in 1985, UNLV in 1991, Kansas in 1997, or Kentucky in 2015 – doesn't always win the national championship. The truth is they usually don't, which underscores just how different the two concepts are.

The final AP No. 1 team has won the NCAA championship only once since 2001, and only four times since the tournament expanded to 64 teams in 1985. No, they are not the same. And no school should pretend that they are by giving them the same designation.

We can sometimes agree which team is the most outstanding. But without a national tournament to determine whether that team will survive to claim the official and superior status of national champion, we can't responsibly jump to the conclusion that it deserves the title. That would cheapen the accomplishment of those who tested themselves in the fires of competition and proved themselves worthy. No championship, no champion.

Kansas does not respect the distinction. It appropriates the designation "National Champions" to give the appearance that it won two national championships in the 1920s. This is equivocation, the use of ambiguous language to conceal the truth. Kansas completes the deception by making the Helms banners physically identical to its NCAA championship banners and displaying them side by side as a larger set of like elements.

And the Lord spake, saying, "Three shall be the number thou shalt count, and the number of the counting shall be three. Four shalt thou not count, neither count thou two, excepting that thou then proceed to three. Five is right out."

An award bestowed in honorary recognition is not a championship. Kansas pretends otherwise and in its vanity wears two counterfeit crowns. Hubris! With two mythical banners already in the rafters, and talk of a third following the pandemic-shortened 2020 season, Kansas may soon claim as many fictitious national championships as it does genuine ones.

From one blue blood to another: Don't falsify your championships (we see you, North Carolina). That comes achingly close to stolen valor. Stand tall on your considerable and inarguable achievements. Honor those early teams, by all means, but do so honorably, not with pretense. Distinguish their special recognition from the official titles you earned in tournament competition. This above all: to thine own self be true. 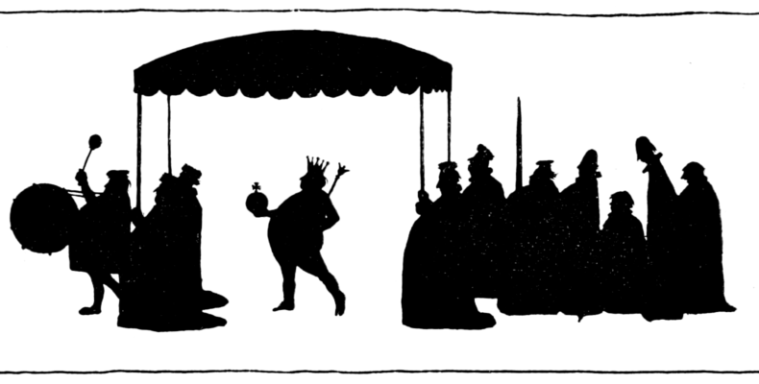 Acknowledgments: I wish to thank Jon Scott at BigBlueHistory.net for his invaluable research on the Helms Athletic Foundation and the elusive concept of a national champion in the early years of the sport. My thanks as well go to Bruce W. Bean, Ph.D. and photo trekker, for nicely capturing the banners in the Phog, and to the University Archives, Kenneth Spencer Research Library, University of Kansas Libraries, for the historically important and adorable 1923 team photo. Lastly, to Monty Python, wink wink, nudge nudge, say no more.