A recent comment, and one that we see many times from multiple different sources every season, claimed that UK's basketball roster doesn't have any players on it ready for the NBA. This is a comment we see every December through February. Of course, the roster probably has at least three guys ready for the NBA. I guess I should say in my opinion it has three, but I think history comes closer to bearing out my opinion than the other. Draft projections do, too.

But it did get me thinking about the topic more critically. How often, over the years during Cal's tenure, have UK's NBA hopefuls made good decisions? How often does it look like they may have made a mistake? To answer that, I decided that the decision (apart from personal and/or family/financial considerations) comes down to two factors that have to do with basketball itself: the player's readiness and the player's talent. For this draft decision discussion, I am using these terms with specific meanings.

Readiness is primarily a measure of how much of a player's college playing potential he has achieved. If Brandon Knight had stayed another year in college, how much of a better player could he realistically have become than he had already shown? My answer is not very much, thus I give him a high readiness score. There is also a small element of physical maturity included in a player's readiness.

Talent is a combination of things that relate to how good of an NBA player he could potentially be. A large part of this is measurables: size, length, athleticism, quickness, etc.; another large part is skills: shooting, ballhandling, court vision, passing, defense, rebounding, instincts, etc. Note that these things do NOT equate to college stats. I can rate one player with higher "talent" despite him having much worse college stats than another player. Probably (in most cases where it happens) this largely has to do with measurables: see Ulis vs Skal, for example. Ulis was unquestionably a massively superior college player, but from an NBA perspective, Skal has more "talent" (as I am defining it) to offer. Ulis' NBA talent level is not as high as Skal's.

With that hopefully being clear enough to explain my premise, I ranked UK's draftees on these dimensions below. 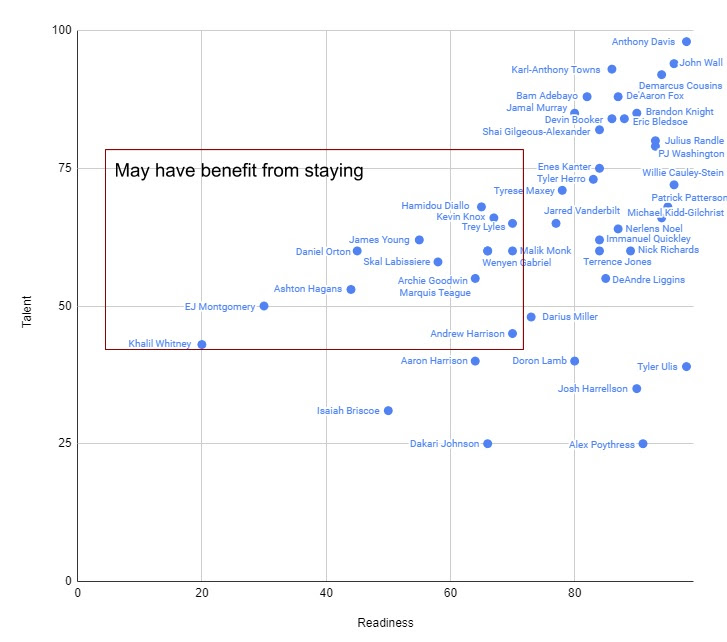 The red box highlights the player's I think it is most fair to say may have made a suboptimal choice in going to the draft. You can quibble about how far to move the right side of the box, or the bottom of the box. Maybe your box would include Maxey, Vanderbilt, and Aaron. Or maybe you think Monk, Gabriel, and Lyles made fine decisions. Both seem defensible to me. IMO you'd have to think colleges are a lot better at player development than I do to think that Briscoe or Dakari should have come back when they got drafted and found themselves on NBA teams as very fringy talents. Maybe you think I've put some guys in the completely wrong place on the chart. I know some of you will think that! And that's fully understandable, these are largely my own feelings and observations, and not determined by any set formula.

But contrary to what a lot of UK fans seem to believe, I don't think most of the guys who've gone to the draft from UK made dumb decisions, I think most of them made good decisions. I am sometimes surprised that people think that such a large body of individuals, with such drastic financial incentives on the line, could continually make suboptimal choices. I chalk it up to fanhood tunnel vision. However, opinions differ.

I have 13 guys making draft decision mistakes, and 32 making good decisions (or the only decision open to them in the cases of Harrellson, Miller, and Poythress). What do you think? How many guys made bad decisions? Keep in mind, I'm not asking how many guys were 100% NBA-starter ready the day they got drafted (that's not the right question at all, IMO), I'm asking how many of them made the wrong choice about whether to stay or go when they did?

How many draft hopefuls left too early for their own good?