This coming week will be the 2019 NFL Draft Combine, and it will feature eight Kentucky players including the potential number one pick Josh Allen. This is yet another achievement from last year's dream season, and will serve as a rolling promotion over the next two months until the NFL Draft is held in late April. It's a testament to these players, and the coaches that developed them, as well as a signal to future recruits and their families.

In anticipation of the future narrative emerging this draft depletes UK Football coffers, the following will be examples of this roster being deeper than many probably realize through the lens of the Citrus Bowl. Special attention is paid to the defense, and the offensive line given the loss of senior experience from those areas.

UK loses five seniors from its secondary, but one player returning is Robinson who contributed all season at safety when UK went to its nickel package. The former HS track star chose Kentucky over Alabama, and his talent became evident over the course of his redshirt sophomore season. When UK went into its nickel package, Robinson would fill in for Mike Edwards at free safety. Below (Robinson is circled in blue) is a play from the first quarter when Robinson came up to make a solo tackle in open space against Miles Sanders. 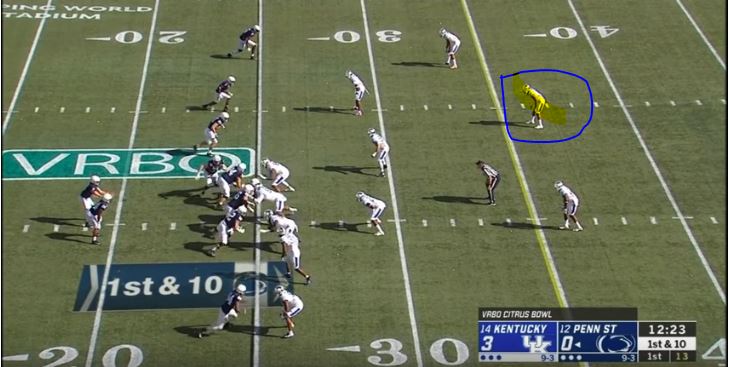 The video clip of this play can be found here. PSU has good blocking on the perimeter, and Robinson is required to make an open field tackle against Sanders who rushed for 1200 yards in 2018 in his first season as a starter, and left school early for the NFL. He's currently projected as a mid-round pick.

At the beginning of the second quarter, Robinson comes up again to make the play on Sanders in the open field. He doesn't take a great angle, but his natural speed allows him to make up for it. (I'd also like to single out defensive tackle Kordell Looney on this play. It demonstrates his knowledge of assignments in that he knows he has the edge in this defensive call. To his credit, he's trying to get to the outside, but looks to be held by the offensive tackle Will Fries.If nothing else, he forces Sanders to make a less direct line to the perimeter buying time for Robinson to come up field and make the tackle).

Robinson returns along with safeties Tyrell Ajian and Jordan Griffin. The latter two also were highly-recruited prep players, and each have had individual moments in games to diminish the losses at the safety and nickel positions next season.

Taylor is the player I'm most excited about next season. The junior had a similar recruiting background to Josh Allen: a late addition flyer to a recruiting class after UK missed out on so-called bigger fish. The gargantuan 6'9'' defensive end played great in the Citrus Bowl, and will be a player who will receive NFL attention his senior season. Early in the game, Taylor (again, circled in blue) disabuses the Penn State coaches that he can be blocked by merely a tight end. 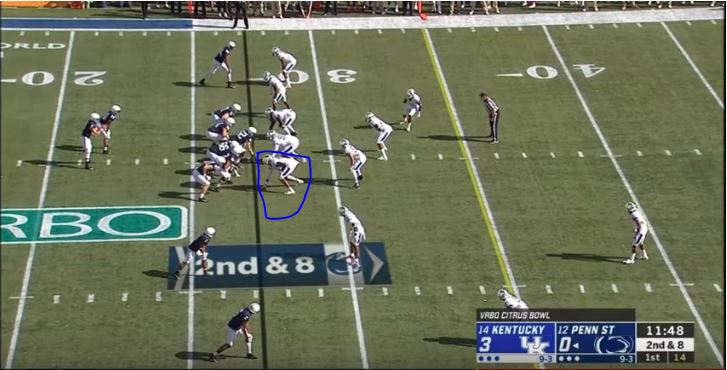 In the video version, Taylor whips the tight end and makes a tackle for loss. Kash Daniels run blitz helps disrupt the play, but this would be the last time all game the Penn State coaches wouldn't account for Taylor with only one man.

Late in the second quarter, on the play in which I think PSU's starting quarterback was injured, UK is in their nickel package on third-and-five. In the past, the coaches would play Adrian Middleton, a defensive tackle, at nose tackle in their nickel packages occasionally. The idea being to get a bit more speed from the interior pass rush. On this play, they put Taylor at this position in the hopes of utilizing his speed but also his length. 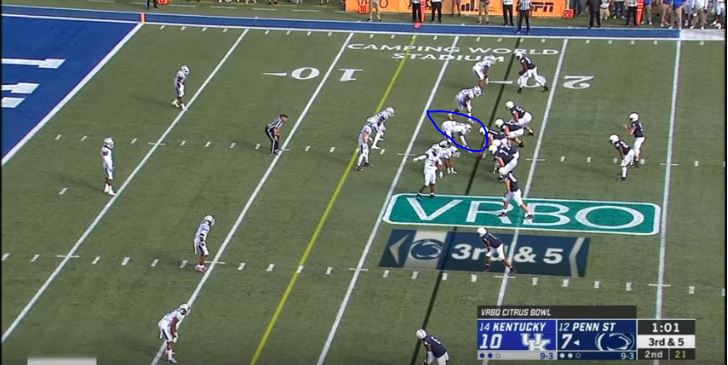 The result of the play is a Taylor sack. He drives the center four - four! - whole yards into the backfield immediately folding the pocket, and forcing the quarterback to scramble. He then sheds his block and makes a tackle. This important, dopamine-rush-to-brain-receptor-while-sitting-on-couch-that-gets-better-every-time forced PSU to attempt a field goal they would subsequently get blocked by Josh Allen.

There are two other defensive linemen worth highlighting quickly. Penn State had two offensive linemen leaving early for the NFL - tackle Ryan Bates and guard Connor McGovern. Both were All-BIG 10 selections who had been the strength of PSU's offensive line along the right side all season. Quinton Bohanna is a great nose tackle whose impact is rarely measured by the stat sheet. He'll be the anchor of the interior of UK's defense next season, and he held up well versus McGovern and the rest of PSU's interior offensive linemen.

Also, worth mentioning is this sack by tackle TJ Carter against Bates. This interior pass-rush move (Carter starts the play aligned across from PSU's right tackle Bates) was the most impressive sack of the day, including any of the three earned by Josh Allen. Carter is not a player who gets much local media attention, but this play underscores how deep UK is on the defensive front in that a largely unheralded player makes the slickest sack of the day. The play even starts with the announcer circling Josh Allen showing where everyone's undeserved (on this play) attention is focused.

The middle linebacker who may have heard about once or twice has improved every season. He spoke to the media last spring about the need for him to work on his flexibility in order to improve his lateral quickness. The player that arrived in Lexington was always strong, but now he's also more twitchy and capable of better pass coverage. Beyond that, the coaches use him wisely. He's a smaller linebacker, so they free him up to run blitz and be disruptive rather than sitting him back and giving offensive linemen an easy target.

This play is 3rd-and-6 and UK is showing pressure, but Daniels executes a delayed blitz and he gets the sack and nearly a safety. It was a well-designed play by the coaches, but Daniels of a year or two ago couldn't have been relied upon to have enough burst to get to the quarterback after a two second delay.

Further illustrating that point is this blitz from late in the second quarter. Daniels is aligned wide giving the PSU coaches the idea he'll help cover the Trips formation to the field side. 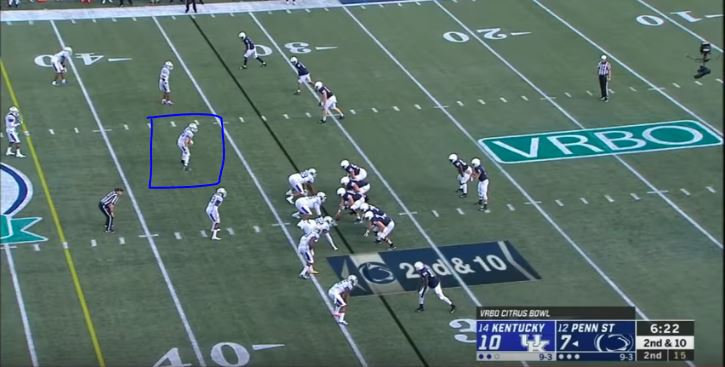 UK gives PSU a look making them believe they have five versus five in the box which in most offenses is an automatic audible into a run call. UK can be deceptive and do this because they know Kash can recover, and not only does he get back into the box but goes all that distance to earn a tackle for loss setting up third-and-long on a big series before halftime.

The inside linebacker corps should be very solid next year between Kash Daniels, DeAndre Square, and Chris Oats. This is easily the most talented linebacker corps top-to-bottom at Kentucky in years, if not decades. If a player can emerge to contribute as Square's back-up this unit will be one of the strengths in 2019.

The left side of the offensive line the last three games of the season consisted of these two players, and when UK needed important rush yards they tended to run the ball to their side. This was especially true in the second half of the Citrus Bowl after an underwhelming first half performance by the offense. In fact, UK didn't run the ball to the right side - one featuring seniors Bunchy Stallings and George Asafo-Adjei - the entire second half. They relied on two players who will return in 2019 to bring the team back and help assure Benny Snell would break the rushing record.

On the first play of the third quarter, UK calls Snell's number to their left side. Snell (red circle) is running off the right hip of Stenberg (blue circle). This play works because of Stenberg owning his man at the point-of-attack, as well as some good backside blocking from Bunchy. This play would subsequently be good for 30 yards and immediately set the tone for the third quarter. 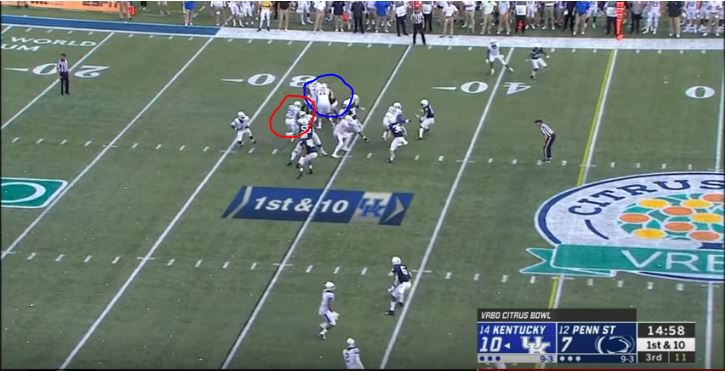 Stenberg is more than just a power blocker. Later, Stenberg would start on the left of the line but at the snap pulls to the right side, and headhunts for a safety at the second level. This was on a big 2nd-and-10 that would go a long way to determining if UK were getting seven or three points. 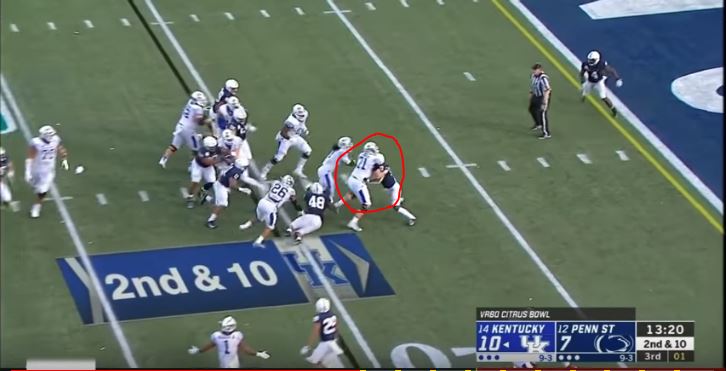 Stenberg would show off his foot work again in a zone blocking technique on the following series where he reaches the linemen, and assured Kinnard has him, leaves to block a backside linebacker at the second level for a play that would go eight yards. In the preceding play he reemphasized his physicality when got a pancake on a down block.

Kinnard is a tackle with one of the highest ceilings on the entire team. The former blue chip player from Ohio follows several other former blue chip offensive linemen UK has signed under Stoops quietly forming UK into Offensive Lineman U. Not the sexiest branding, but it does win games.

A play demonstrates Kinnard's promise is on a simple screen play where the 6'7'' 350 pound left tackle shows off his athleticism and gets to the second level to block for Lynn Bowden too quickly. He misses his block on the defensive back because he arrives a little out-of-control. In the future, that won't be an issue as he learns, but his natural talent is something that can't be taught. The big man made it five yards, after initially hesitating to sell the pass to defender's read keys, in the time it took Bowden to tuck the ball and start up field. 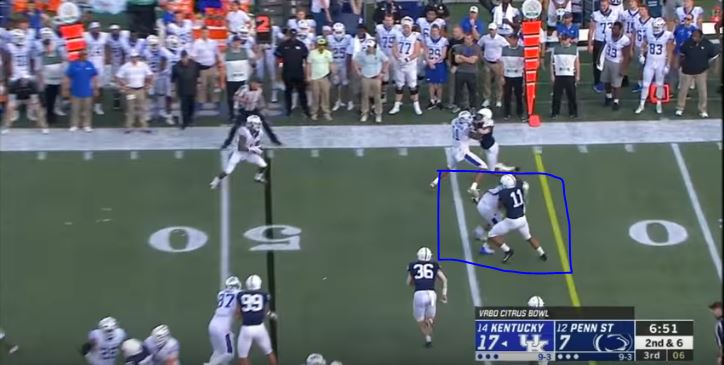 Kinnard also played an important role on Snell's record-breaking run towards the end of the third quarter. He makes a difficult block that involves crossing the fact of the defender, and then pivoting his hips to seal him off from the running lane. This is not easy and requires strength and good footwork. (Also check out senior tight end CJ Conrad getting to the second level to put a hat on the linebacker which cleared out the last defender for Snell's TD run.) 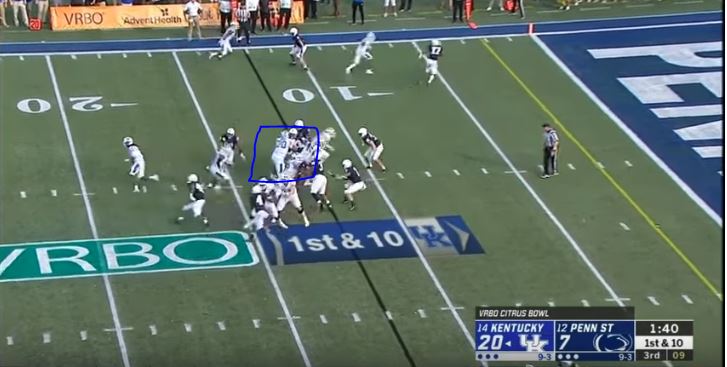 UK will lose a lot of professional talent to the NFL, but there are several promising players who are returning. The defensive and offensive lines once again will be the strength of the team in 2019. Line standouts Josh Paschal and Landon Young will return after missing 2018 opening the possibility to both lines being even better than in 2018.

The issue will be UK replacing its three graduated cornerbacks, and pairing one or two offensive skill players who can make explosive plays along with Bowden. Asim Rose is a good running back who will be made better by a great offensive line, but UK will have to throw the ball well to beat the best teams on their schedule. If UK can shore up its passing offense and passing defense then the 2020 NFL Draft may be as well-represented for Kentucky Football as the 2019 NFL Draft seems poised to be.

Returning player you are most excited about...?