A Sea of Blue’s 2015 Kentucky Football Recruiting Big Board

Here is the updated 2015 Kentucky Football Big Board, showing all the players that Kentucky is currently recruiting.

Share All sharing options for: A Sea of Blue’s 2015 Kentucky Football Recruiting Big Board

Mark Stoops and his staff continue to expand Kentucky's recruiting footprint. After crossing the Ohio River during his first recruiting cycle (2013), Ohio has played a huge part of the Kentucky recruiting strategy. Florida has become a primary recruiting ground where it was practically nonexistent in the past. This year Kentucky has offered players from twenty-two states, including the District of Columbia.

According to my count, based on all sources available, Kentucky has offered 229 high school and junior college players as of Friday, the 25th of April. Of the 229 offers, 50 of those have committed to another school, including former UK commit Montrell Custis. You should already know by now that Marcus Walker has reopened his recruiting with his de-commitment. What was once six commitments is now down to four and, they are all offensive linemen, the most needed position in NCAA football year in and year out.

If you are concerned about the number of commitments, let me remind you that Dorian Hendrix committed on 3/22 last year after attending the February 9th Junior Day. Thaddeus Snodgrass committed on 4/12; Mikel Horton committed on 4/20. Also, Denzel Ware originally committed on 2/13, de-committed on April 9th and signed with Kentucky. Recruiting didn't really take off until Drew Barker committed on May 10th. The turnout for the Spring game was a deciding factor for Barker.

Here's our pre-game Big Board for the end of Spring Practice. Players are listed by listed by state, number of offers (RBO) plus top 25 offers (see Paul Nelson's methodology here), Rivals rating (5 stars are red) and UK recruiter, if known. Each player has a notation concerning Nike's The Opening which includes the Elite 11 camp and his rank if he's ranked by Nike's top 100. If a player has been invited to the Under Armour All American Bowl, there is a notation for that as well. The Army All American Bowl has not sent out invitations yet as far as I can tell.

Sixty-two percent of the offers made by the Wildcats fall within three states. Florida leads the way with 70 offers (30.6%), followed by Ohio with 37 offers (16.2%) and Georgia with 35 offers (15.3%).  Tennessee (14) and Alabama (13) are the only other states where Kentucky has offered double digits in terms of numbers of players. The Cats have offered players from the following states not mentioned above: Kentucky (5), Texas (9), Maryland (7), California and Virginia (6), District of Columbia, Illinois, and North Carolina (4 ea), Mississippi and Indiana (3), South Carolina and Missouri (2), and Michigan, Oklahoma, New York, Connecticut, and Arkansas (1).

Stoops & Company are clearly making attempts to get a foot in the door with several top high schools in Kentucky's chosen areas of recruiting. The Cats have offered 5 players from #1 Jacksonville Trinity Christian, 2 from #2 Stone Mountain, GA Stephenson, and 4 players from St. Thomas Aquinas (Ft. Lauderdale). Apparently, Kentucky likes what they see of players at Creekside HS (Fairburn, GA) as 4 have been offered. For a list of the high schools that are producing the talent, check out this list of the top 100 schools.

As usual, click on the slides for a larger view. Players who have committed to other teams are shown in the last two slides. Kentucky may or may not be recruiting them after their commitments.  For those who want to download the Big Board and save it or view it, here are the slides in PDF format.  Links to players are fully functional in the PDF file, but not in the images of the slides below. 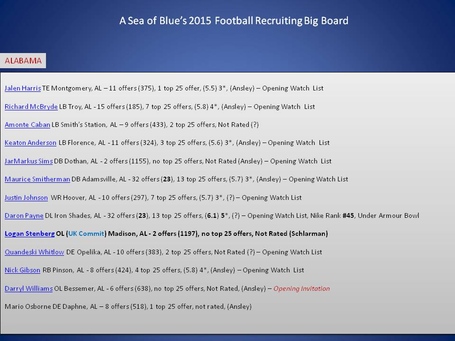 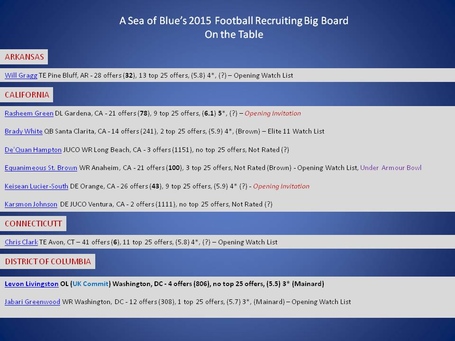 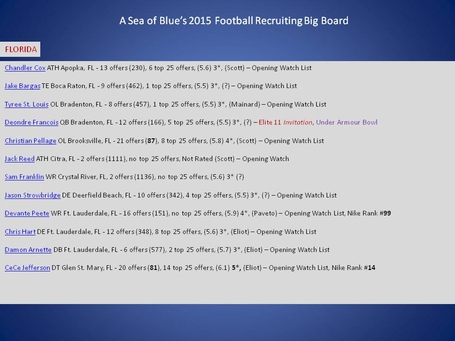 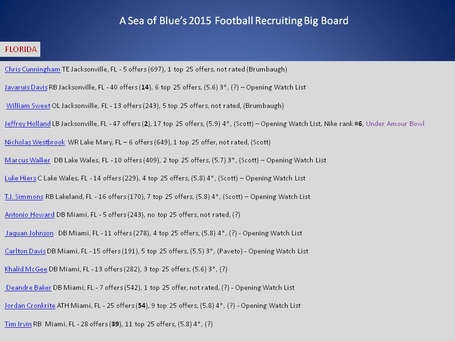 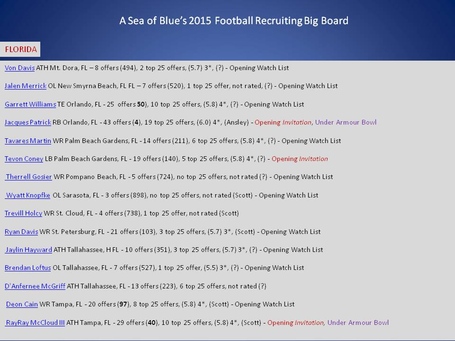 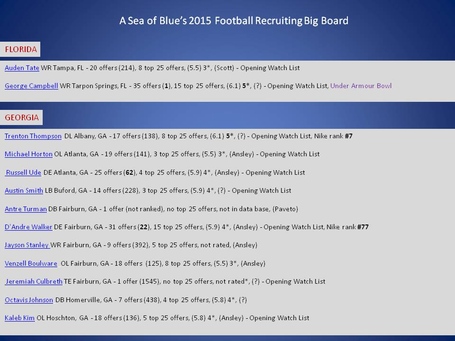 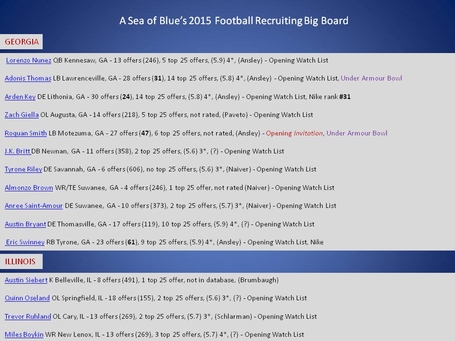 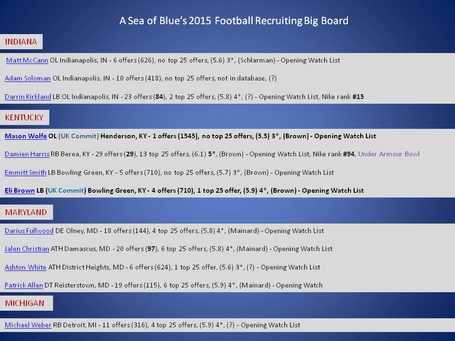 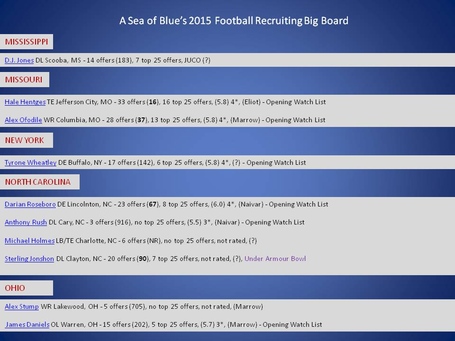 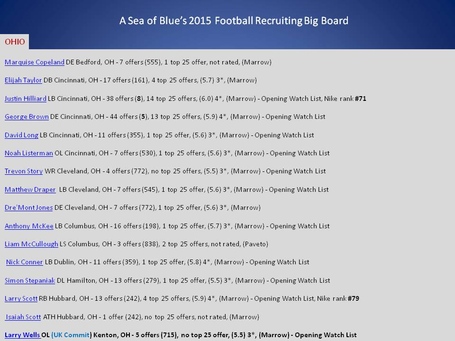 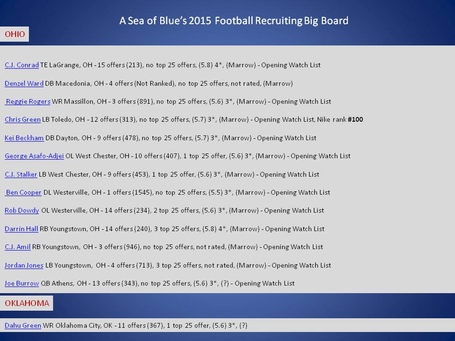 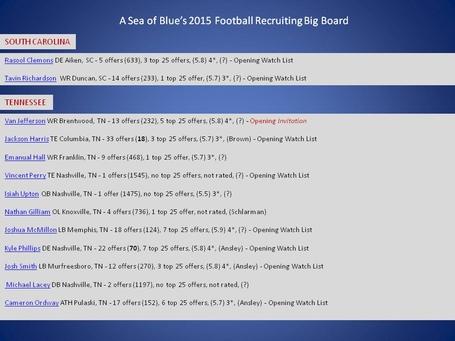 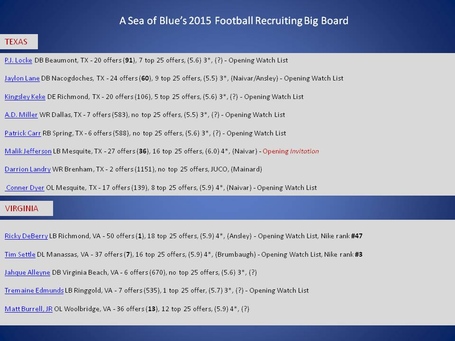 The last two slides represent players who have chosen another school. 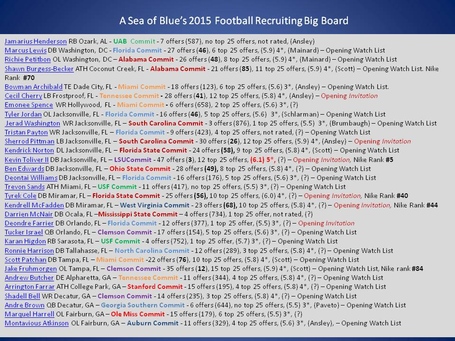 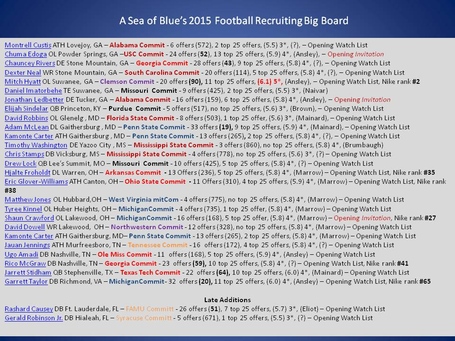 It doesn't look like our staff is going to let up anytime soon.