Is Kentucky’s Football Staff Handing Out Offers Like Candy?

The University of Kentucky football staff has 155 offers on the table. Should it give you pause to ponder? It depends on your point of view.

I saw a tweet the other day that asked "who Kentucky hasn't offered?" While the question is on the ridiculous side, it got me wondering because I've not been able to publish a 2015 Recruiting Big Board. The offers have been flying out the door and it prevents me from posting the Big Board.

The 247 Sports data base of recruits currently numbers 3,418 football players and Kentucky has offered 155 with the number increasing on a daily basis. The Friday before the Junior Weekend Camp, our recruiting looked something like this: (Click to Enlarge) 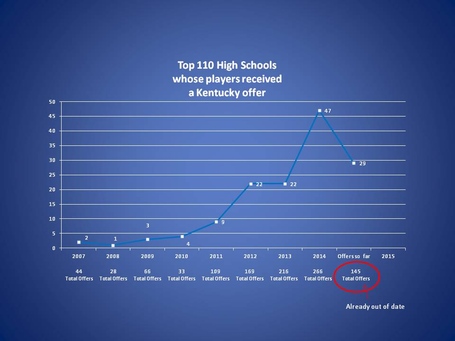 There were many who never said a word in social media, yet they were there because they received an offer during camp. How many? Only the football staff and the kids know. Since Signing Day, I've spent a lot of time building my 2015 Big Board, yet I find it difficult to keep up with what's going on.

As a preview of what's coming for you once things settle down a bit, the Big Board will be organized by state rather than simply a list of players like in the past. Each player will be linked to a profile at 247 Sports and their highlight video and Twitter account will be linked. However, those links won't work in my presentation to you because each state will be a picture.

I am, however, working with a new tool that will eventually do that called Tableau. You can do interactive stuff with this software that can't be done elsewhere except maybe through Google. Here's an example of what can be done: Link. You can play around with the Alabama recruiting or you can select a school and check out each state the recruits are from. If anyone knows how to use Tableau, please contact me at orlandocatfan@aol.com. I'd love to talk to you.

Until I learn Tableau, I will make my Big Board spreadsheet available to any reader who wishes a copy once I get it published. With the basketball team finally showing that they might be becoming the team we hoped for, I doubt many of you are worrying about football recruiting anyway. So, I feel like I have some time to get it together.

Okay, back to our recruiting. I thought I would give you an idea with how we stack up with some selected football programs just to show where we stand with our 155 offers: (Click to Enlarge) 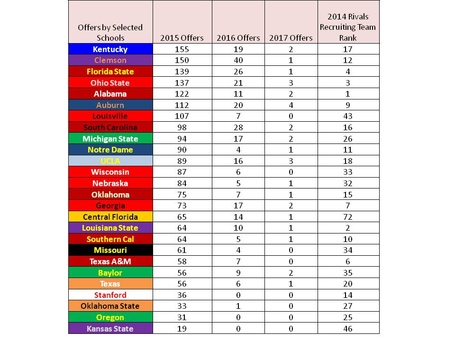 I might mention that all the teams listed above, except Kentucky, are the Top 25 teams as determined by the weighting system used by Rank by Offers. You can read about it here.

What I find interesting is the table shows, to me, the differing philosophies of recruiting. Since these are all top programs, the differences indicate that there is no "Best Practice" because all these team, except Kentucky, have been successful on the field of play. That being said, I think one can reasonably assume that if Stoops keeps recruiting like he has, winning will follow. When you look at our schedule for the 2014-2015 season, you can easily visualize three to five (or six) wins. Whether that happens remains to be seen. However, if we win all of our seven home games, that would include the first signature win (Georgia) for Stoops & Company. Go Cats!