Modern offenses will often package a run and a pass in the same play call. The offensive line will execute their run block, the back will take his run assignment, and the receivers will run their routes. The quarterback is often given the freedom to decide whether to run or pass. He will not communicate this to the rest of the offense.

Unlike option plays, these type of packaged plays are made pre-snap. The decision is made by the alignment of a defender or number of defenders in the box. The decision is made pre-snap because lineman will be run blocking. If the play is allowed to develop too long, the quarterback risks having lineman downfield on a forward pass. An advantage of this type of packaged play is all players execute their assignment at 100% effort because no one knows if he is running or catching the ball. Offensive linemen are given a three yard cushion in college football.

Here is an example of UK and coach Brown running a packaged play out of their power running set. The backside guard is going to pull and lead through the gap. The outside receiver will be running a 5 step Slant. If the quarterback has decided to pass he will pull and throw the football. Notice the receiver on the bottom has a defender in tight press coverage. This is normally a muddy read if a slant or seam route is being thrown and thus Towles decided to run the football. 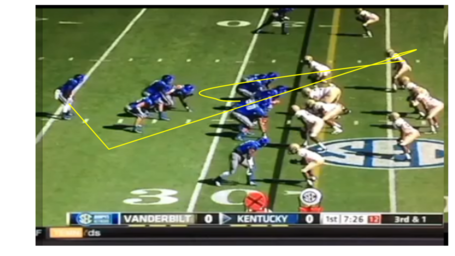 Later in the drive it appears the packaged play was called again. This time UK removed the fullback and replaced him with Timmons. On this occasion Towels chose to throw the slant to Timmons in the slot which resulted in a touchdown. Notice the safety over Timmons has a 5-8 yard cushion. This will normally be a clean read if a slant is called because the receiver has enough time to get the defender on a backpedal or to turn his hips before breaking on his slant. 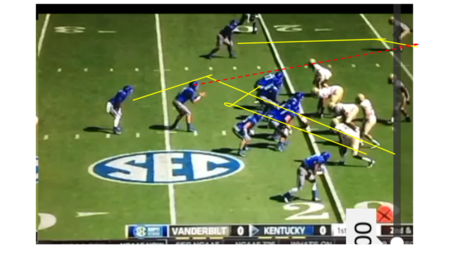 Below are two clips showing the packaged play concept used by Neal Brown.