The importance of gap integrity with an emphasis on keeping contain.

After Kentucky defeated both Ohio and UT-Martin, Mark Stoops made comments that some defenders "were trying to do too much." Stoops would have told the media if he felt these players were making selfish decisions. He suggests they are having mental lapses. Maintaining discipline may sound easy, but it can be very difficult. For example, the instinct to chase a ball-carrier when your eyes and read of the offensive linemen tell you he has the ball, is the same instinct that fails you when the quarterback actually kept the ball all along and now has free reign on his naked bootleg to run for 10 yards or look to pass for more. Staying disciplined to play within your system during a game can be difficult in the heat of the moment.

Football efficiency can be extremely fragile thing. If even one player is not on the same page as his ten teammates, bad things can definitely happen. Playing sound assignment football is essential.

Stoops after the Ohio game:

Q. Anybody tell you this is the first time that a Kentucky team has two consecutive first half shutouts since 1988?

...Again, you know, some of that there were some missed opportunities. I think we had a sack, we had a clear sack and just missed him. We had a good pressure called on 1st or 2nd down and we’re going to get a 10‑yard loss, instead they scramble out and get a 10‑yard gain. That’s a possession.

Q. What is the No. 1 thing that needs to be fixed? You said you needed to fix some things from last week and now this week.

When I was talking about that I was talking about contain on the quarterback. That’s one that jumps out at me right away. Again, it’s just about being disciplined in all phases and that takes a lot to be disciplined and focused and the game changes and there’s many formations. They do a lot of good things that you have to be locked in on. So we’ve just got to continue to focus, and the big thing is do each individual job.

There is gaps all along the line, but for our purposes this post will place an emphasis on the defensive tackles and defensive ends. It depends on the circumstances, but they will often be responsible for the C and D Gaps. They must keep their outside shoulder free, and deny the ball-carrier free passage to the exterior. If they do their job they will force the ball-carrier back inside into the teeth of the defense.

Below is an example of defensive tackle Mike Douglas maintaining his gap. At the snap of the ball he rushes the quarterback while defending the edge, and keeping his outside shoulder free. Following his responsibilities results in a deflection. If he had cheated inside to chase the quarterback then contain would've been lost, and even a immobile quarterback would have made it to the edge.

Next is an example of Za'Darius Smith and Douglas stunting (both in blue square). The first image is pre-snap.

The second image is the start of the stunt, with Smith (blue) ducking behind Douglas (yellow) to fill his gap in the interior. Douglas is meanwhile rounding along the outside to fill Smith's gap and rush from the outside hoping the offensive linemen get confused. 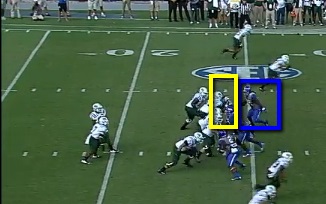 The final image shows Smith with his back to the quarterback. He's taken himself out of the play, and the offensive lineman is happy to use Smith's momentum against him. The quarterback happily takes the lane vacated by Smith, and scrambles for a first down. 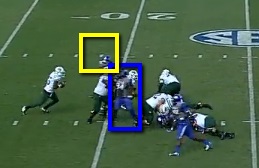 The final example comes from late in the second quarter on a 3rd-and-long.

Cory Johnson beats his man and looks to be on the cusp of getting a sack. Smith, who here is in good shape with his outside shoulder free, then leaves his gap to help finish off the quarterback..

...but uh-oh the Johnson couldn't wrap up the quarterback, and now he's escaping the pocket and has an empty lane now that Smith got sucked in.

Smith has taken himself out of the play, and the quarterback completes a 15 yard pass on 3rd-and-long after scrambling. UK had the chance to get good field position, but one small mistake kept Ohio's drive alive. If Smith had followed his responsibilities, and ignored his instinct, he probably would have had his sack as soon as the quarterback turned to avoid Johnson.

The purpose of this post isn't to pick on Smith. Several players were guilty of losing gap integrity, and there were many examples when Smith followed protocol and it led to him getting tackles and quarterback hurries. As Stoops said,too many players are trying to do too much rather than play within the system. The results can be disastrous when that happens.

This is important for the Florida game. Jeff Driskel, and his back-up Treon Harris, are both quarterbacks who can convert a 3rd-and-long scramble. Florida will have superior athletes at most positions, and playing within the system can fight that off.