Kentucky Football: H-backs In The Air Raid Under Neal Brown

What is an H-back and why is it valuable?

Share All sharing options for: Kentucky Football: H-backs In The Air Raid Under Neal Brown

In the last few weeks I've found myself watching last season's football games on ESPN3 while doing other tasks. While watching a game I was reminded of Neal Brown's use of Kentucky's tight ends in the backfield in a position ("role" might be a better term) that goes by "H-back". It occurred to me that it might be useful to delve a bit more into this position because it can be a very important one. In short, H-backs are used in order to gain tactical advantages. An H-back can cause constant match-up problems and defensive coordinator headaches.

More from the Mile High Report:

The term H-back basically means, "motion TE." The Skins would typically use 1 RB, 1 TE, 2 WR, and this H-back as their base offensive personnel grouping. The in-line TE would be a bigger, more blocking-focused player. The H-back would be a somewhat more maneuverable type, but still a blocking-focused guy. He would usually line up 1 step behind the line of scrimmage, either outside the in-line TE (double wing,) or outside the weakside Tackle (balanced,) depending on the particular play. He'd frequently go in motion, either taking the offense from the double wing look to a balanced look, or from a balanced look to a double wing look.

Perhaps the greatest value of the H-back position is the ability to borrow a blocker from the backside of the formation. UK can also use motion to put the H-back where they want him pre-snap. This gives them additional versatility with the ability of putting the H-back frontside or backside. If the defense adjusts to the formation, they can run a concept away from the formation

From their position, they could be taking on defensive linemen or linebackers as a lead blocker, or they are also eligible receivers able to run routes. Depending on the formation and defensive coverage, they could have a favorable match-up against a slower linebacker or a smaller defensive back.

H-backs can also line up wide. I specifically noticed in the Kentucky-Vanderbilt game that Neal Brown liked to align tight ends Jordan Aumiller and Steven Borden out wide to block defensive backs on a screen pass to Ryan Timmons or another receiver. If the H-backs do line up wide they must also be threats to receive the ball in order to keep the defense honest. For more information on H-backs in the receiving game read here.

Lastly on tactics, H-backs can disrupt defenses by effecting their personnel groupings since the presence of H-backs can mean a variety of offensive formations. If UK decides to go HUNH without substituting, forcing the defense to do the same, UK can force a defense to keep personnel on the field that's more suited to stop either the run or pass and then UK can do the opposite. For example: 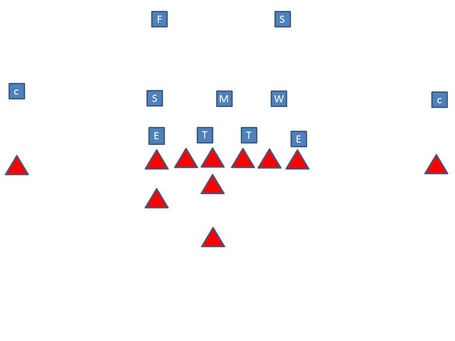 The defense is aligned more for run support. Then UK motions the H-back: 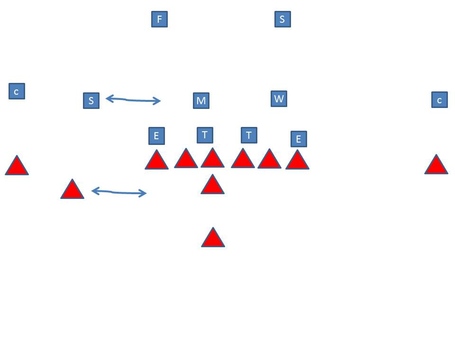 A simple motion of the H-back does a few things. First, if UK wanted to run the ball there are now six blockers to five defenders in the box. If the strong safety rolls up the defense could be more vulnerable to the pass on the right side. Second, the H-back now aligned wide could be a mismatch against the linebacker in the passing game. The defense at this point probably wishes it was in Nickel coverage but can't substitute and is forced to make due.

Though, an offense doesn't even have to go HUNH. If a defensive coordinator sees two tight ends and one running back in a huddle ("21 Personnel")  the subsequent formation could look like either of these: 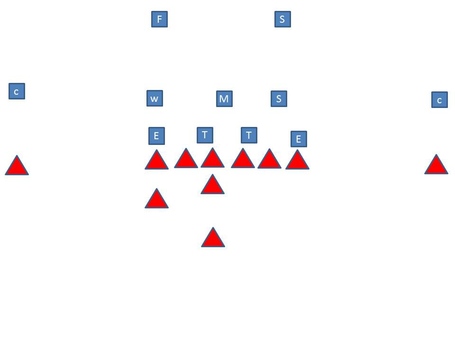 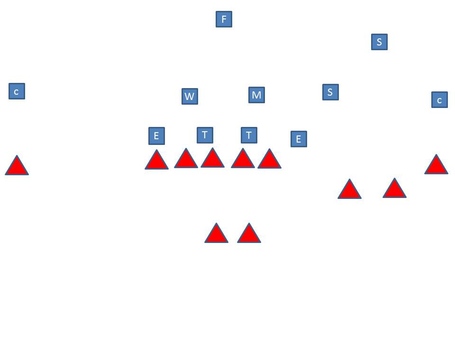 Those formations are very different from a defensive match-up perspective after breaking the huddle.

The position serves as a microcosm of UK's iintent to be more versatileand create match-up problems. Kentucky is recruiting players to fill this position which implies its importance. According to previous posts by Hank, UK pursued Chandler Cox and Nick Connor to play the position but struck out. I'm sure other recruits who can fill the role will emerge. No surprise that Vince Marrow is not only coaching tight ends this year but fullbacks too. Both positions fit his job profile.