Kentucky Basketball: What do you want to learn from the Big Blue Bahamas Tour?

As we are now less than a week away from the 2014-15 UK Basketball season officially (sort of) kicking off. I wanted to see what everyone else expects to see or learn from the week.

Share All sharing options for: Kentucky Basketball: What do you want to learn from the Big Blue Bahamas Tour?

Christmas in August? Yes, It is an exciting time to be a member of the Big Blue Nation right now.  We have an exciting football season upon us as camp started Sunday with as much energy as the Commonwealth has seen in years.  The SEC Network rolls out this month with an exponential increase in UK coverage sure to follow as the year progresses.  Finally, the Wildcats kick off their Big Blue Bahamas tour this coming Sunday and we get a preview of what is nearly a unanimous expectation of a potential title season.

I wanted to take a moment and find out what it is you wanted to learn from the Bahamas tour while sharing with you my thoughts and hopes.  I will throw one thing out there that I am disappointed about regarding this tour: we will not have the pleasure of entertainment via the great Dom Papa as we did during the Canadian tour.  If you do not remember, Dom was the sideline correspondent for the broadcasts.

He struggled at first to pronounce UK's player names; he also wore a Windsor polo (UK's opponent), and even referred to Dave Baker as Dale.  However, over the next two games Dom donned some UK gear got the names right and made sure he said Dave all while stealing the heart of the BBN.  I guess we will just have to make due without "The Last Dom."  What we do have to look forward to though, is having Jay Bilas commentary on all the games, actual HD quality broadcast, and some interesting new uniforms.

Now, on to what I hope to learn about this team during their six game slate in Nassau, but first, a little about the competition.  The Cats will play three teams, two separate times.  The Dominican Republic national team will likely be the toughest of the three as they rank 26th in the world in FIBA.  They will also play the Puerto Rican national reserves twice, as well as a French first-division club team Champagne Chalons-Reims Basket twice.  These teams are no cupcakes; in fact, it is very possible we could lose to all three of them.  Coach Calipari went as far as saying:

Of Course, Cal is masterfully incorporating coach-speak here and surely does not expect us to go 0-6, nor will they.  However, Do not be shocked if we split the series or even possibly go 2-4.  These are professional teams with current and former NBA players.  Truth be told I would consider 4-2 or anything better a strong success. 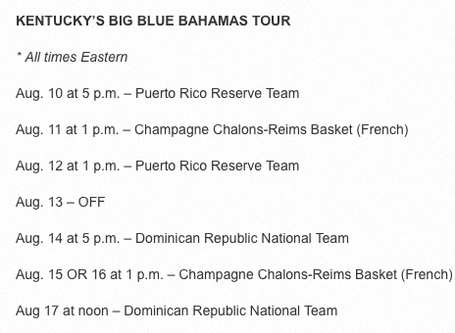 Finally, here is my wish list for next week:

I would like to say that I could care less about the scoreboard but let's face it; we are all UK fans and winning matters.  Having said that, this is going to be a fun week coming up and will likely give everyone in America nightmares about the train that is going to be leaving the Lexington station starting in November.