Let's talk about the front seven and the absolutely crucial role they'll play for UK this season.

If you buy something from an SB Nation link, Vox Media may earn a commission. See our ethics statement.

The reveal yesterday of the depth chart clarified Kentucky's starting front seven for fans and media. It also reiterated the inexperience in a unit that will be crucial to stopping the run. A strong run defense will go a very long way to determining the outcome of the season; however, of the players listed on Kentucky's two-deep, a whopping 71% have never started a game for UK; meanwhile, 36% of the players listed have never played a snap for UK. If UK is going to win this year, it will be on the backs of several who have yet to prove they're capable of winning. Buckle up.

The depth chart listed a surprising change to the defense. In an unexpected move it listed Alvin Dupree as a SAM linebacker while also listing a 12th player - Blake McClain at nickel back. Since the defense can't play with 12 players this seemed like obfuscation rivaling Bill Belichick levels. Yet, at the same time it was also a honest statement about UK's intended defensive multiplicity.

It might be useful to quickly review a few basic fundamentals of alignments and gap responsibilities for UK's front seven (via Pro Football Focus) that seemingly played both the 4-3 and 3-4 fronts at times last season. The numbers are the "techniques" where defensive linemen align, and the letters are the gaps that defenders must fill to prevent an offense from being successful. The basic idea is for every gap to be filled by a defender, because the offense usually wins if it can create space, leverage, and a numerical advantage. 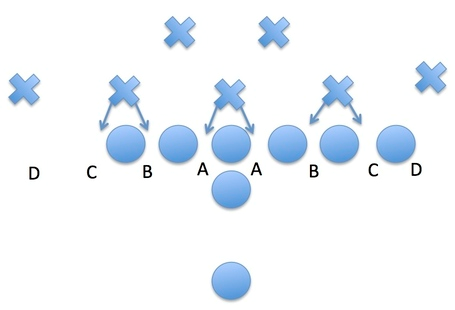 Brief 4-3 Overview (Over and Under)

Last season, UK primarily aligned in the 4-3 as Mark Stoops' defenses had done at Florida State and Arizona previously. A difference between the 4-3 front and the 3-4 front is in the actions of the defensive linemen. In a 4-3, the linemen will only be responsible for one gap instead of two. This is a 4-3 Over front (again via Music City Miracles): 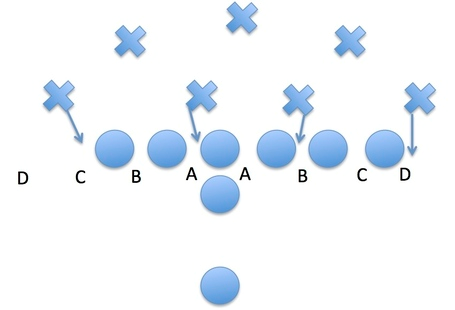 Since every linemen is only responsible for one gap, the linebackers must pick up the slack and also cover the gaps ahead of them. Last season UK mostly played a 4-3 Over front against offense's sporting two running back formations (if an offense placed three receivers on the field the SAM linebacker was substituted for a nickel back). This formation also played to one of UK's strengths in that defensive ends Za'Darius Smith and Alvin Dupree were aligned on the outside shoulder of their man enabling the pass rush.

Another version of the 4-3 is the 4-3 Under front which UK played regularly under former defensive coordinator Steve Brown, but I don't recall seeing it employed last season. 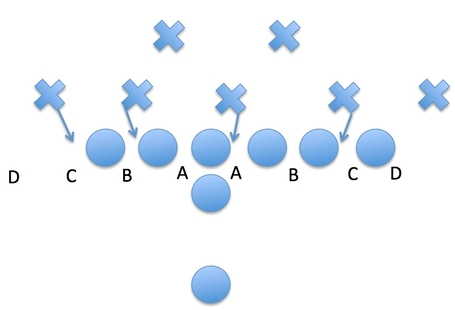 At first glance this looks like the 5-2 defense your Pee Wee football team may have run. This is also a "one gap" front, and the SAM linebacker has moved to the line of scrimmage and is aligned to be head-up or on the outside shoulder of the tight end depending on his size and skills. This is very similar to what a "one gap" 3-4 front would look like to most observers. Notice the weak-side defensive tackle covering the B gap, and the weak-side defensive end covering the C gap. They are both matched up man-to-man which could result in positive or negative mismatches.

Does Yesterday's Depth Chart Provide Clues For More 4-3 Under Against Two Back Formations?

I was initially surprised to see Jason Hatcher, Za'Darius Smith, and Bud Dupree all in the starting lineup since that is essentially three defensive ends. Yet, this starting line-up gets more of UK's best defenders on the field at the same time. This seems to be the overarching point.

Moving Dupree to SAM linebacker would be odd for a 4-3 Over look since, on paper, it takes away from UK's pass rushing strength (unless Hatcher is just that good now). Yet, if we think in terms of a 4-3 Under it does a few things to increase UK's perceived strengths and diminish its perceived weaknesses.

Aligning Douglas/Meant/Johnson and Hatcher on the weak-side gives them one-on-one match-ups. Hatcher may have developed enough strength and quickness to hold serve against offensive tackles. Meanwhile, if the offense wants to run to the weak-side they could be out-numbered, and Douglas/Meant/Johnson is holding off the guard from blocking UK's smallest WILL linebacker. On the strong-side Dupree would still be allowed to rush or provide run support to the edge. If UK is in Cover 1 and the tight end releases on a route, Dupree may be capable of covering him compared to Paschal.

A 4-3 Under look would also match UK's personnel's strengths and measurements at nose guard, weak-side tackle, and linebacker (read U. of Washington post linked below for more info). A telltale sign would be Za'Darius Smith and Bud Dupree aligned on the same side of the line of scrimmage with Hatcher on the opposite side - probably standing up.

Most Important Thing To Remember

One defense isn't better than the other. They are just reflections of personnel's abilities. Winning comes from the execution. Mark Stoops repeatedly states his defenses will be multiple. Which is to say that UK isn't necessarily a 4-3, a 3-4, or a 4-2-5 team, and that the starting line-up has little bearing on what the defense will do. Starting alignments are in name only. Yesterday, SB Nation sister blog Tomahawk Nation had a humorous example of this as well.

Remember, last season when UK faced an offense with at least two backs in the backfield SAM linebacker TraVaughn Paschal was in the game to defend against the run. Yet, when an offense moved to at least three receivers Paschal was sub'ed out for nickel back Blake McClain. When UK played Mizzou last season they even installed a dime package to fend off their passing attack.

An offense's formation, tendencies, and personnel will usually dictate UK's personnel and scheme. It's nice to have personnel that are versatile to counter various personnel groupings, and UK is slowly recruiting and developing its way there, but we're not there yet.