The 2007 season was a special one for all of the BBN, but it may not have played out the way it did without beating top ten Louisville and this is our remembrance of that win.

By the time the 2007 season ended, the Kentucky Wildcats football team would end up having one of the better seasons in decades.  This group of players is also certainly one of the most special teams from a fan perspective.  Kentucky would end up 8-5 on the year finishing the season with a bowl win over national power Florida State.  Among the season accolades:

The Cats were very talented that year and many of the players were drafted by the NFL or signed to an NFL contract.

On to the game in question.  The Louisville Cardinals were coming into Commonwealth Stadium with a top ten national ranking, a Heisman candidate in Brian Brohm, and undefeated national title aspirations.  UL had won four straight games in the series as Coach Rich Brooks and the entire UK roster was winless against UL.

The year prior, UL had beaten UK 59-28 in embarrassing fashion and this year's team seemed even more lethal.  They were averaging a staggering 66 points per game leading up to UK.  They had even scored on their first play from scrimmage in both games.  To add a bit of a personal angle to the game, Andre' Woodson had never beaten Brian Brohm in high school or college.

In a twist of irony, Brohm had always cast a shadow over Woodson's career, effectively making Woodson his "little brother."  This would be Woodson's final chance to impact that record.  Woodson was playing for the team that considered UL to be the "little brother" program in basketball, but Louisville had turned the tables on Kentucky in football.  Woodson had also been selected as a first team pre-season All-American by ESPN's Ivan Maisel.

In classy fashion, Woodson was asked about the personal competition and had this to say.

"This isn't between me and him," Woodson said of his matchup with Brohm.  "It feels even greater to know we beat Louisville.  They're 70 miles down the road and we hear it all the time from fans, that we don't deserve to be in the same stadium with them.  I think to finally prove the critics wrong and (show) we're a team that's to be respected a lot more in the state, that means so much more."

Preview of the game and Spencer Tillman predicts two-touchdown win by UL.

The game began with the Cards receiving, and during the return Calvin Harris stripped the ball on the 20-yard line setting up the Wildcats for a raucous beginning and UK in great shape to strike first and quick.  While the Cats were not able to punch it in, they did convert a short Lones Seiber field goal to jump out to a 3-0 lead.  The ensuing offensive series for UL did not end well for them either as it appeared that Brohm was going for a third consecutive game with a TD on the first offensive play.  However, today was not that day as Trevard Lindley picked off the pass and returned to inside the 20-yard line, setting UK up in great position once again.

On third and goal Andre' Woodson would provide a bit of foreshadowing when he found Steve Johnson in the back of the end zone all alone on an apparent coverage breakdown.  The Cats had struck fast and furious, throwing down the gauntlet and leading 10-0.  Kentucky would add to the lead with another field goal to go up 13-0 and visions of a win against UL were dancing in the heads of the Big Blue Nation.  It would not last long, however, as UL answered quickly behind the right arm of Brohm to score and pull within 13-7 to end the first quarter.  With that, the war had officially begun.

UK would answer with a long drive to start the second quarter that ended with Rafael Little powering it in from the 8-yard line breaking multiple tackles.  The lead would only be 19-7 however, as Seiber missed the extra point.  He had nearly missed the first extra point when he fortuitously banged it off the upright.  This was the fourth consecutive possession where Kentucky had scored and it was apparent that UK was going to punch back on this day.  The Cardinals would answer on the ensuing drive to bring the game to 19-14.

With the half winding down, UK was not quite in field goal range when they faced a 4th and 1 and opted to go for it.  While I completely agreed with the decision, the play call was iffy, to put it mildly.  The call was for Woodson to option left and pitch to Little so he could get around the edge.  Woodson would never be confused with Tommy Frazier and it showed as the play resulted in a loss and UL with a huge break.

Brohm would surgically move the Cardinals down the field and into the end zone in less than two minutes, giving UL the lead, the momentum, going into halftime.

However, this Wildcats team refused to play to the historical trend and came out to begin the second half with an 11 play, 6 minute drive ending with a Woodson strike to fullback John "The Terminator" Conner for a touchdown to take the lead and momentum back at 26-21.

The euphoria would be short lived — 13 seconds to be exact.  Tim Masthay had a little less leg than normal and kicked off a yard deep into the end zone.  Trent Guy fielded the kick and opted to run it out and 13 seconds later, he was untouched and in the end zone giving Lousiville the lead and momentum once again at 28-26.

Fast-forward to the fourth quarter and Kentucky would open the final frame with an impressive drive that featured a large dose of Rafael Little.  On third and goal, Woodson would roll right and rifle a ball to the back of the end zone, where Jacob Tamme would go up for and literally out play the Cardinal defender and rip it down for the TD and a 33-28 lead.  The Cats had set the stage for the dramatics to come.

Being a UK football fan has traditionally meant that you had your heart ripped out on many occasions in situations that mirrored the current one (Bluegrass Miracle, anyone?)

The Cards would answer by driving down the field with ease and got to within three feet of pay dirt, facing a 4th and goal from the 1-yard line.  Predictably, Brohm plowed in for the go ahead TD, but there was laundry on the field ... Illegal procedure by Louisville.  That backed UL up to the six-yard line and instead of opting for the easy field goal, Louisville coach Jim Kragthorpe sent Brohm back out there to go for it.  The middle screen was blown up at the 2-yard line and Commonwealth stadium was rocking.

While UK was not able to capitalize on the scoreboard, they did burn some clock and pinned the Cards down at their own 20 with six minutes left in the game.  Being a UK football fan has traditionally meant that you had your heart ripped out on many occasions in situations that mirrored the current one (Bluegrass Miracle, anyone?)  Having Heisman hopeful Brian Brohm under center with over six minutes left and only 80 yards to cover... felt like it was inevitably going to be another broken heart for BBN.  Eight plays later, Louisville running back Anthony Allen plunged into the end zone putting the Cards up 34-33 with a mere 1:45 left to play.

I can speak for almost all of Big Blue Nation when I say we thought it would take a touchdown to win the game due to Lones Seiber's inconsistency. The Cats had played second fiddle to their little brother for four years and were on the verge of doing it yet again for the fifth straight year.

Much to my delight and that of 70,000 other fans, these were not our daddy's Wildcats.  UK would dink and dunk their way to the 40-yard line and on 3rd and 10; Woodson hit Raffy Little for a nine-yard gain.  This set up a potential game ending 4th and 1 and it felt like the inevitable gut punch.  Thankfully Brooks did not repeat the mistake of the earlier option attempt, Woodson dropped back and rifled a pass to an open Jacob Tamme for three yards to keep the hope alive.

In that moment that the BBN thought the impossible may actually be possible, disaster struck.  Woodson hit a crossing Tony Dixon for a big gain and put UK on Louisville's side of the field.  A Cardinal defender was trying to pull the ball from Dixon after the play.  Inexplicably, UK's center Eric Scott barreled over and shoved the UL player.  This resulted in a predictable unnecessary roughness penalty pushing UK back past the 50-yard line with only 39 seconds left.

Then it happened...  "Stevie got loose."

The play is simply "4 verticals," the idea is to send two receivers down the sidelines and two receivers down the seams.  The hope is that the deep coverage is overwhelmed and outnumbered and they essentially have to pick one receiver over another and this would create an open guy.  Eleven seconds and 57 yards later, this is exactly what happened.  Commonwealth Stadium and the entire Commonwealth of Kentucky erupted in what I am guessing measured on the Richter scale. 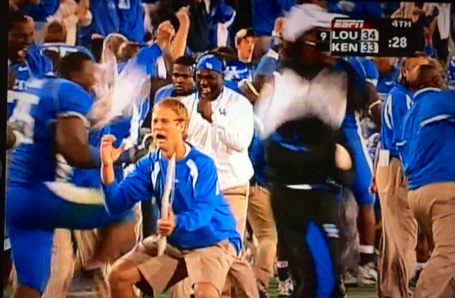 The unexpectedness of the play and sheer joy of the moment must have clouded the coaching staff for a moment because the cats were up by five points and the extra point put them up six, leaving a 28 second window for a Heisman candidate to drive for a game winning score instead of a game tying one.

UL advanced far enough to see one final Hail Mary from Brohm and luckily, it was just far enough away from pay dirt.  The pass was inexplicably tipped into the air by the Cats and Harry Douglas snagged it out of the air with zeroes on the clock.  I am sure the BBN, along with me, had a collective groan and expletive filled moment with flashbacks to the Bluegrass Miracle.  The difference this time is that UK actually had defenders between the WR and the goal line instead of overzealous fans rushing the field.  Kentucky made the tackle and party was officially on.

The fans spilled onto the field, understandably, and all of Kentucky was celebrating its first win over a top-10 team in over 30 years.  It was that much sweeter knowing we had derailed the Cardinals national title hopes and possibly Brian Brohm's Heisman hopes.  The day and the rest of the rivalry discussion for that year now belonged to the Kentucky Wildcats.  The governor's cup was heading back to its rightful home in Lexington and ESPN had an instant classic on its hands.

Some great tweets and YouTube videos regarding the game:

Watching UK beat UL in the 2007 matchup never gets old. Best game I attended. Stevie got loose! UK beating LSU was the most rad day tho.

Watching the Stevie got loose game just gave me all sorts of chills. I love you, SEC Network.

#throwbackthursday the time when the Cats took down #9 loserville STEVIE GOT LOOSE @StevieJohnson13 pic.twitter.com/rHZ2FOTbL0