Neal Brown goes over a specific combo play UK likes to run, and then we see it in practice against UofL last season.

One of the things Kentucky likes to do on offense is run combo plays. That is to say, when the team lines up there are two potential plays that could be executed depending on the reaction of a specific defender. The quarterback reads one specific defender during the course of a play, and his actions determine whether the ball is handed off or if it is passed. This concept provides the offense flexibility in a simplistic way - think the triple option for today's modern defenses. Neal Brown says the UK offense doesn't call audibles, nor do they reportedly call multiple plays in the huddle, so this is a concept that helps attack smart defenses, especially in a HUNH offense. 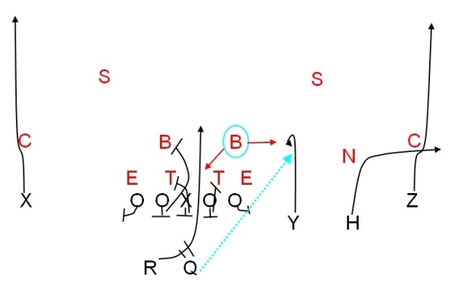 As Brown explains, the offensive linemen are set up to block for a Draw call regardless as to whether the play ends up a run or pass. The logic being a one-step drop and quick pass will prevent the linemen from crossing the line of scrimmage too early, and if a hand-off ends up occuring they will cross the line of scrimmage at the precisely right moment.

There's a bit more variety on what the receivers will do. At 2:19 in the video there is a slide that breaks down their responsibilities:

The Y receiver, Alexander Montgomery, runs a Stick route. This receiver is the quarterbacks first option. If it's zone coverage he pivots away from his defender (could be either to the inside or to the outside) and the quarterback will deliver the ball to the opposite shoulder of his defender. If it's man coverage he might run an Out route towards the sideline. Running stick is what helped to make James Whalen a first-team All-American at Kentucky in the 90's, and is definitely something the coaches have brought up to 2015 tight end commit CJ Conrad.

The H receiver, Ryan Timmons, runs an Out route too but will read the cornerback covering Z to determine his which route he runs.

The Z receiver, Jeff Badet, runs a Go route along the sideline with the intent of turning his defenders hips and eyeballs away from the play. If he can't see the ball that's one less defender to initially worry about. Brown says at the end of the video that if the defense is matched up in press man-to-man coverage the quarterback has the option to throw deep to him.

In this combo play the back-side X receiver, Javess Blue, blocks; however, did you catch what Brown said at the beginning of the video? He talked about running a combo play out of this formation that has the X receiver run a Fade route. Another potential layer of complexity ran out of the same formation and concept.

The overall principle is to prevent the offense from being "check mated" by the defense, and to do so as simply as possible. This formation allows for a 1-on-1 possibility with the X receiver, and an easy read of the nickel back or linebacker defending the Y receiver running the Stick route. If the play breaks big all the better.

Here is an example of a combo play from the UK-UofL game, but ran out of a balanced formation. It's 2nd and 5, UofL appears to be in a 3-4 alignment, and are showing zone coverage pre-snap.

In this next image Maxwell Smith and Raymond Sanders are in the mesh. Smith's head is up and he is reading the second defender from the top sideline aligned over Ryan Timmons. This defender, #91 Marcus Smith is a bit flat-flooted in his reaction to Timmons possibly because he's wary of the run.  Meanwhile, the offensive line is blocking like it is a Draw.

Maxwell Smith is in the process of throwing the ball to #1 Ryan Timmons who has pivoted to the outside towards the sideline. Maxwell Smith read that the key defender (Marcus Smith) didn't attack the run, but he was also flat-flooted so he throws to the Stick route.  The Z receiver (outer receiver on top) is running his Go route along the sideline forcing the corner back - who looks to be responsible for a deep third - to follow him. Timmons is essentially 1-on-1 against a damn good defensive end/outside linebacker, but a slower defender nonetheless. That's a mismatch in pass coverage so advantage goes UK. The back side receivers are about to engage their blocks, and aren't even looking to receive a pass.

Timmons was the only receiver on this play, and Maxwell Smith's progression was simple: hand-off or throw it to his only route-runner. Timmons turned Smith's correct decision into a 20 yard reception that eventually turned into a UK field goal. Thus tying the game at the close of the first quarter, and providing UK momentum going into the next round.

One-step combo plays sort of exemplify the Air Raid offense as told by its coaches: learning the concept and installing the playbook doesn't take much time, but mastering it takes thousands of repetitions. Crucial because this season's success hinges on whether underclassmen - some of whom have only been on campus six weeks at this point - can contribute. Can Drew Barker reliably make the correct reads against SEC speed? Can Ramsey Meyer correctly time his block and explode downfield? Can Alexander Montgomery bounce back from his knee injury, and turn a simple Stick route into a 15+ yard gain? We get closer to answers with every passing day.

You Want To Know More?