Previewing Kentucky’s First SEC Game: A look at Florida, their recruiting and coaching

What in the world is going on in Florida? First, a 4-8 season last year and an uninspiring first half of the 2015 recruiting cycle.

Share All sharing options for: Previewing Kentucky’s First SEC Game: A look at Florida, their recruiting and coaching

I'll start with the recruiting.

The football recruiting world is a world of nuance and relativity and the state of Florida is experiencing it this year. If you already didn't know it, Florida leads the nation in terms of players with Division I (FBS) offers for most years. The University of Florida, however, is not having an easy time with recruiting so far.

The state of Florida sends more than 300 high school football players to play at the NCAA Division-I level every year. It is a hotbed of football talent and the Orlando Sentinel covers it from Key West to the panhandle.

As one would expect, the competition among the Florida schools is fierce in attempts to keep the Florida recruits in Florida. Considering that almost every Division I school is trying to lure Florida kids away from home, Florida is probably the most competitive state. It is so competitive that Iowa announced a couple of years ago that it would no longer spend the time and money to recruit the state.

As of now, six months into the 2015 recruiting cycle, Florida has two commitments from the Orlando Sentinel's top 100 (#93 Jalen Julius and #100 Andrew Ivie).  Just for the record, Kentucky also has two (#59 Luke Hiers and #75 Marcus Walker). Miami and Florida State have seven apiece.

So, is Florida's recruiting on the decline? Maybe. Maybe not. 46% of the Orlando Sentinel top 100 Florida players have not committed yet. Half of the top 20 haven't picked a school. Two of the five Rivals 5* players have committed elsewhere: Kevin Toliver to LSU and Derwin James to Florida State.

Of the uncommitted, 247 Sports projects 5* Byron Cowart and 5* CeCe Jefferson to pick Florida. Florida's other 5*, Jacques Patrick is projected to commit to Florida State. CeCe Jefferson, if you'll recall, has teased and flirted with the BBN once or twice. Unless he takes a visit, don't even remotely count on this guy as anything other than a Florida commitment.

What is curious, though, is why haven't any of the uncommitted Florida elites committed? Are they taking a wait and see approach on the upcoming season?

It could be since it is common knowledge that head coach Will Muschamp is #1 on the hot seat after last year's 4-8 season. He certainly took a lot of heat at the SEC Media Days as described in this Gainesville Sun article.

Florida's offense has been on a decline since Urban Meyer left. Starting quarterback Jeff Driskell is operating under his third offensive coordinator. Usually, a new offense presents a learning curve even for the best quarterbacks.

Florida's offense (113th) last year was worse than Kentucky's (107th). However, it was good enough to beat the Cats, but not Georgia Southern. It wasn't good enough for Florida fans as Muschamp was forced to get rid of Brent Pease due to fan unhappiness. The Gators replaced him with Kurt Roper who helped David Cutcliff bring Duke out of the graveyard.  Muschamp's first OC was Charlie Weis for 2011, then Pease for 2012and 2013 and now Roper.

If Muschamp doesn't survive with Roper, Muschamp is the cause of his own undoing. His idea of having a great defense with a ball control and game management offense hasn't enthused the Gator faithful. These are fans who were used to big offensive numbers under Urban Meyer and Steve Spurrier. Both coaches brought Florida a national championship. Muschamp hasn't come close.

Another possible reason why the Florida elites haven't committed to the Gators could be due to the Joker Phillips situation. Getting caught having lunch with a recruit during a dead period wasn't the brightest move and could get the Florida program an NCAA sanction. It was bad enough to cause Phillips to resign. Is it another reason for Will Muschamp to be shown the door without significant improvement?

Lake Nona WR Deondre Farrier de-committed a couple of months ago and Jacksonville First Coast WR Tristan Payton just de-committed. Payton isn't the only recent de-commit. The Gators also lost DB Deontai Williams who flipped to Georgia. You can read about Payton and Williams at the Gainesville Sun. #14 Da'Vante Phillips (WR) de-committed back on December 2013, according to Saturday Down South.

Florida has dropped in the Rivals team rankings to 36th with eight commitments. Their average star rating is still good, however, standing at 3.39. Take a look at their commitment list.

You have to wonder, though, if Florida is susceptible to more flips? It was rumored over the weekend that Washington, DC Gonzaga 4* DB might be reconsidering his commitment. Also, Kentucky and Florida are fighting for a commitment from Ohio's George Brown who seemed enthralled during his visit to Gainesville this week. In days past, Kentucky wouldn't stand a chance, but now stands a 50/50 chance. Some predict Kentucky wins this recruiting battle.

As you can see, Kentucky is closing the gap. 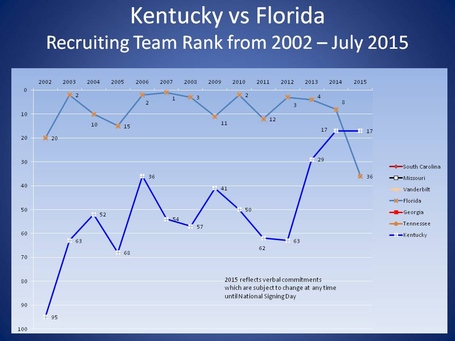 The Florida and Kentucky Series

The two teams began playing on an annual basis in 1967 and the results are not pretty for Kentucky fans. Read and weep. Home Team in Bold. Kentucky wins in Italic.

There you have it. Kentucky's last win was in 1986, 27 years ago. Another Florida win makes it 28-0, the longest losing streak in this once great land of ours. If anyone could call this a rivalry, there is plenty of swamp land available on the cheap down here in Orlando.

For me, the root cause of this debacle has been the lack of talent and depth at Kentucky. One reason for that was the NCAA probation and scholarship limits that brought Rich Brooks to town. Kentucky's lack of talent created depth problems that still are there even after two great Mark Stoops recruiting classes. The void still won't be filled until after the 2015 class shows up on the roster.

Back in March, Athlon published an article ranking the rosters for the 2014 season. They pointed out how much recruiting matters. It matters just as much as coaching with a few exceptions. The combination of good recruiting and good coaching by the schools who can do that can be devastating to those schools who can't do both. Read the article here and see if you agree.

Kentucky ranked 36th, thanks to the 2013 and 2014 recruiting classes. Yet, Athlon says Kentucky is the biggest underachiever.

Uphill battle in the SEC but this group has the worst record of any "Big 5" school and is 36th nationally in talent.

Eight losses with the second-ranked roster in the nation is completely unacceptable.

That begs a question. Had Joker Phillips retained the coaching staff that Rich Brooks had built, would he have had better results? Joker's staff improved the recruiting a little, but the coaching went south. The record shows that.

While the most optimistic Kentucky fans (the "We Believe" crowd) seemingly want to hang their hat on a signature win in The Swamp on September 13th, Florida still has more talent and more depth than the Wildcats. Don't doubt me on that. You should familiarize yourselves with our opponents. Here's Florida's 2014 Media Guide.

If you've never been to Ben Hill Griffin Stadium, you might get the idea that Kentucky has a chance. We don't. The last time I was there, the game was over before the end of the first quarter and we went on to lose 63-5. With Florida's stadium, tradition, talent and depth and their history against Kentucky, the odds of beating them in Gainesville have to be prohibitive. While the optimist might point to Georgia Southern, that game wasn't a conference game. I think Kentucky will have to beat Florida in Commonwealth before we start thinking about winning in Gainesville.

All that being said, I'll take a victory lap when, and If, we beat them in recruiting. There is that possibility with the 2015 class. Minor victories are better than no victories. I think we'll be able to compete with Florida by 2016 if the current trends hold.

For now, I'll take a competitive game. How 'bout you?