Quick and dirty introduction to the 4-2-5 defensive alignment.

Share All sharing options for: Kentucky Football: Defensive Breakdown of 4-2-5

The University of Kentucky's recently published preseason depth chart suggested that Kentucky's defense will start four defensive linemen, two linebackers, and five defensive backs. Last season the depth chart showed UK would start games in a traditional 4-3 alignment. A change has occurred to the starting lineup possibly because of several factors, or possibly for other reasons entirely. No matter, the point worth emphasizing is a defense changes throughout the course of a game depending on a wide variety of factors, so there's little use in over-focusing on the starting alignment.

For example, Nick Saban has been labeled as a 3-4 coach, and indeed his teams do operate and recruit for a 3-4 defense, but Alabama also runs a 4-man front 80% of the time so it's an oversimplification to label 'Bama a "3-4 team." Even Saban's great defenses are multiple and largely dictated by what the offense is doing.

As 'Bama's defensive coordinator Kirby Smart says in the above link, the blueprint (regardless of the front a team choses to play) is to stuff the run, and force the offense to be one dimensional. Over the span of Mark Stoops' defensive coordinator and head coach career, he has coached the 4-3 alignment, but neither this new front - nor 3-4 looks- mean there's been a fundamental shift.

Because UK did release a depth chart that indicates a starting defense alignment that resembles a 4-2-5, and UK showed this look quite a bit last season, I thought it might be useful to give a very basic overview, with a mind towards more detailed follow-ups if there's a demand.

(Disclaimers: I'm going to talk about the 4-2-5 defense in the way that I was taught, so this isn't a comment on how UK will execute so much as a speculation. I have no clue what UK coaches call these positions or blitz packages, so I'll use the universal terms. I also cannot confidently describe the details of the secondary's calls. I live out of state and so watch the majority of games on the television which typically focuses on the line of scrimmage. Thus, my knowledge of their secondary tendencies are anecdotal and incomplete. Please keep this mind.)

The 4-2-5 defense differs from the 4-3 in that it substitutes a third safety for the strong-side linebacker (SAM). This safety is typically categorized as a strong safety, in that he is built for run support as well as defending against the pass. This is an ever-increasing way for 4-3 defenses to counter the spread offense. Of the remaining two safeties the other strong safety rotates to the strong side, and the free safety rotates to the middle of the passing strength. UK is not alone in the SEC fielding this defense. Defensive coordinator John Chavis also runs a 4-2-5 out of a base 4-3 at LSU.

Let's take a very basic example. Mark Stoops and DJ Elliot see that the The Fightin' Red Triangles have subbed out some personnel and are going with 11 personnel (1 back and 1 tight end) in a probable passing scenario. They decide to call a "4-3 over" alignment (UK did not typically align in "4-3 under" last season). The defensive line needs to maintain gap integrity. The strongside defensive end aligns head-up on the tight end ("Y") in order to not give him a clean release into his route. Meanwhile, the nickelback takes inside leverage on the slot receiver making it hard for him to go middle. The cornerbacks take outside leverage attempting to make routes ran along the sideline - like outs or fades - more difficult. 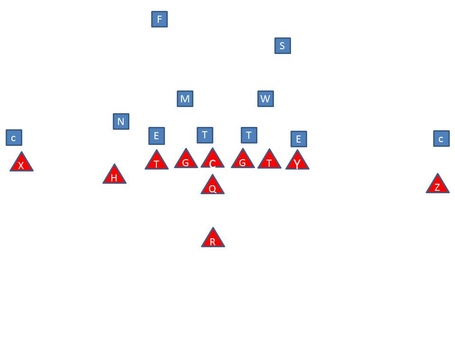 Clear as mud? Now, let's take a quick look at "Spy" (or "Robber" as it is more commonly called) coverage primarily because (I think) I captured UK running it against a similar looking formation last season (check out images #4 and #5 and their descriptions) and so may be more illustrative. Below is Robber coverage against the same formation, and with two high safeties as UK played all of last season. 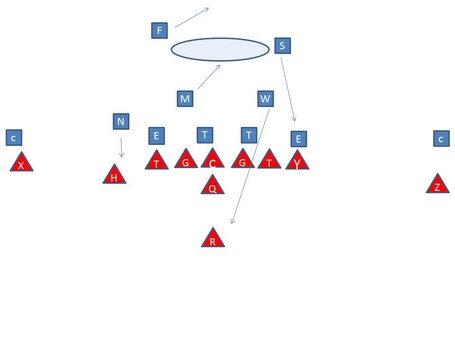 The strong safety matches up with the tight end, and the weak side linebacker matches up with the running back. The middle linebacker drops back and plays the "Spy" reading the quarterback's eyes, and pursues if he scrambles (in the link above Avery blitzes which is another option). If the running back releases to the his side [edit: this originally read "weak side" which was incorrect] then the middle linebacker picks him up (assuming he hasn't blitzed), and in which case either the strong safety or weakside linebacker become the Spy depending on the tight end. If the tight end releases shallow then he's the linebacker's responsibility, but if it's a deep route he's the safety's responsibility. An advantage is that if there is at least one deep route there will be two safeties back deep. For more details on Robber go here.

From a two deep, five defensive back look, UK can run various zone, man, or hybrid coverages making it harder on the opposing offenses to diagnose pre-snap. Of course, there will also be more speed on the field. We haven't even discussed the various blitz packages available. If there's an appetite for it, I will write more on that in the future.