The founder of CFBMatrix.com, Dave Bartoo has been working statistical patterns and correlations since 2004, and he has released a preview of the 2014 UK Wildcats.

It is that time of year again; College Football preview magazines and publications are starting to trickle out. We recently covered Phil Steele and I wanted see what one of the more progressive up and coming prognosticators had to say about the Kentucky Wildcats upcoming season.

His name is Dave Bartoo and he is the founder of the website CFBMatrix.com. Dave has been working on statistical analysis for BCS teams since 2004 and has recently released his first digital preview magazine.

"The CFBMatrix model got its start in 2004 when I was looking for the correlation between college football team recruiting ranking and BCS title game berths. The connection between the two was very strong and I used this system to help ‘tell the story' and create a model for likely expectations for every BCS team."

Dave's progressive model for predicting outcomes and patterns based on statistics has caught some significant traction of late. He was at the forefront of statistically disproving the claim that instituting a 10-second delay before you could snap the ball would lower injuries. With me being a stat geek and excel spreadsheet aficionado, I was naturally intrigued with his thoughts on UK so I checked it out. 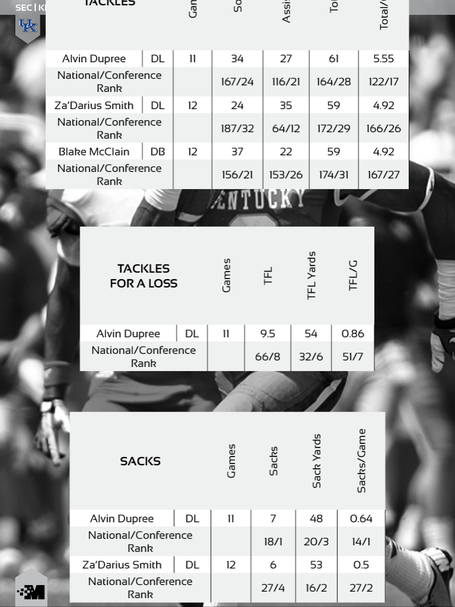 From a returning statistical standpoint there is not much to be learned from UK as they are likely to have new faces at most of the major offensive positions, or at least ones that were not in a prominent role last year. For example, JoJo Kemp's stats last season place him anywhere from 14-28th best in conference and I would be willing to bet money he will be more like top 5 based on workload and maturity.

There are a few bright spots for the Cats though; Javess Blue comes back as the #6 statistical receiver in the conference in receptions per game and yards per game. Considering the likely significant uptick in passing this year, expect him to rank in the top 2-3 in my opinion. Expect Blue to also be one of the more prominent kick returners as he ranks 4th in the conference in returners.

The biggest returning statistical bright spot for the Cats comes in the dynamic duo of Alvin (Bud) Dupree and Za'Darius Smith. When it comes to sacks per game, they rank #1 (Dupree) and #2 (Smith) respectively. Expect those two to "meet at the QB" more often than any other duo in the SEC this year. Overall, the Cats will return 71.3% of their offense and 80.9% of their defense. 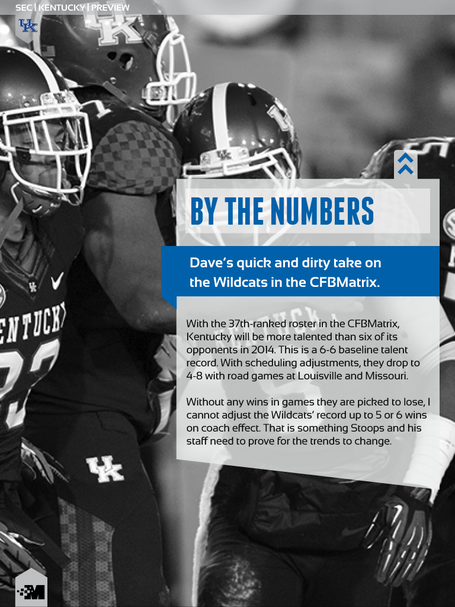 Looking at the quality rankings of the Wildcats, Bartoo ranks Coach Mark Stoops as the 57th best coach in America. This is likely a fair ranking due to a few reasons. Stoops was -2 in expected wins last year and with only one year under his belt, it is hard to get a true reading on his coaching ability (coaching only). Bartoo also ranks UK as having the 37th best talent in football; which is a significant increase from the past when Bartoo ranked UK in the 50's.

Kentucky's 37th ranked talent will put them ahead of six teams on the schedule this year talent-wise. 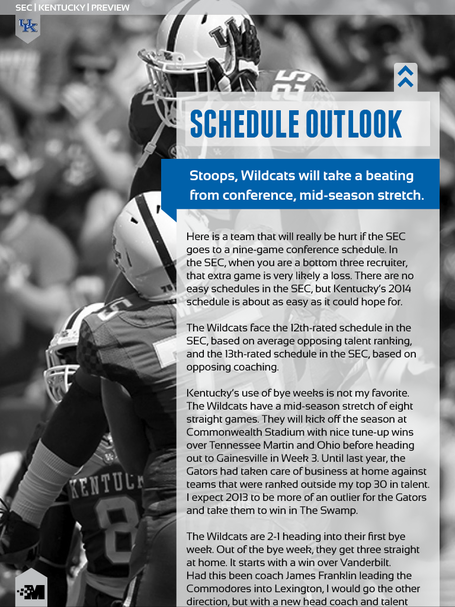 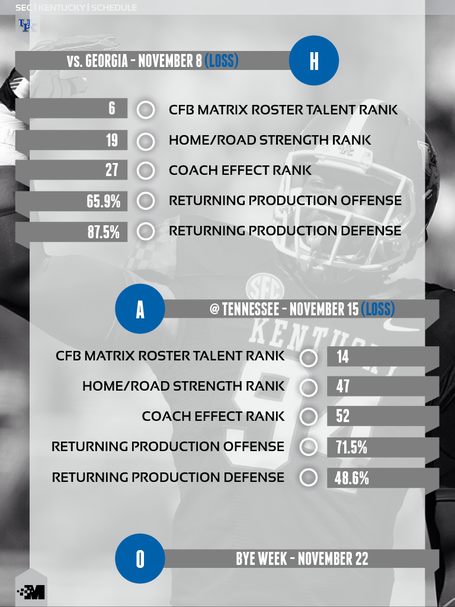 Bartoo is predicting Kentucky to finish 4-8 with losses at Missouri and Louisville due to being on the road, a lack of evidence to support coach effect taking over and Stoops being able to overcome the road environment.

I do not have a problem with this prediction, it very well could be right on, and it certainly is fair. However, it is very hard for me to ignore the progressions from last year to this one.

One thing I will not deny is that I wear blue tint glasses. However, the progress and momentum Coach Stoops and company have fostered has me believing the cats will be a 5-win team on the low side with seven being the best-case scenario.

Ultimately Bartoo urges BBN to be patient and curb expectations for 2015 and 2016. With Stoops recruiting prowess it is only going to be a matter of his coaching ability as the talent is definitely coming. My opinion is UK will be in the top 25 for talent rank by then and at that point it will be on Stoops as to whether or not UK regains its recent "glory days" of the Rich Brooks years.

Here is a link to the UK preview on his website.