Part three of the six-part season postmortem for 2013-14. This part covers the second half of the SEC season.

This is the third part of our series of articles providing the postmortem for the 2013-14 baskeball season. Due to the success of the baseball and softball teams, I thought I'd wait until the end of their respective seasons before finishing off the final three sections. Today, we'll examine the second half of the SEC season, remarkable for the complete change of attitude that afflicted the Big Blue Nation, and understandably so.

The second half of the conference season began exactly like the first, with a game against Mississippi St. This part of the season would see Kentucky come in like a Wildcat and go out like Gator bait, to paraphrase a popular folk construction. Ranked #18 in the AP poll before the MSU game, Kentucky had seemingly reversed the negative feelings caused by the defeat at LSU, defeating Missouri on the road and Ole Miss in Rupp Arena before beginning a two-game road swing to Starkeville and then to the Plains to take on the Auburn Tigers. Kentucky won both, and returned to Rupp Arena for the game that everyone had been waiting for: The Flordia Gators at home. Their road success had raised Kentucky's stock back up to within shouting distance of the top ten at #14, and optimism was on the rise. This was the setting coming into the first key contest of the second half of the SEC slate.

Florida came to Rupp Arena undefeated and almost unchallenged in the SEC at this point in the season, with the only eceptinon being an overtime victory over Arkansas on the road and close, but not particularly scary games at Alabama and Auburn. Kentucky at this point was feeling over their recent road woes, and the comfy confines of storied Rupp Arena gave the Big Blue faithful confidence that the Wildcats were about to deal the Gators their first loss of the SEC season.

This game turned on two things for Kentucky — the season-long bugaboo of turnovers continued to hurt Kentucky, particularly against good teams. In addition, Kentucky was unable to dominate the rebounding and free-throw shooting stats versus Florida, and despite shooting a decent eFG% of 53%, the Wildcats lost the game by ten points.

A major turning point in the game was the technical foul called on John Calipari that turned a one-point Wildcats advantage into a one-point deficit, with Florida having the ball after two Scottie Wilbekin free throws. Florida would score on the ensuing possession to get a 3-point lead, and they would never again be on the short end of the score in the game — see the image below, courtesy of Statsheet.com. The reason for that technical foul was never determined, to my knowledge. Speculation is that it was due to Calipari being out of the coaches box, but Calipari himself professed not to know. Whatever the reason, it changed the momentum of the game in Florida's favor, and they took full advantage. 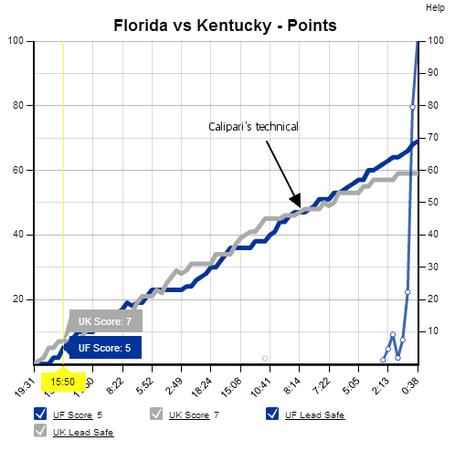 The Florida loss, while not devastating to the season, prevented Kentucky from continuing their rise up the rankings, dropping them back to 18th. At this point, it is pretty clear that Kentucky is fighting for a three or four seed in the NCAA Tournament at best.

The rematch with the LSU Tigers was the point at which people began to believe Kentucky might actually struggle to finish out the season. The Tigers presented problems that Kentucky thought they had solved, but it didn't turn out that way.

Kentucky struggled to contain LSU's smaller guards in Baton Rouge, and then had the same difficulty again in Rupp Arena, which at this point was becoming an ongoing concern. Kentucky just couldn't seem to get back fast enough in transition, and it led to easy baskets and open shots.

Again, as we had seen all season, Kentucky seemed to struggle to make shots close to the basket. From the postmortem:

Kentucky shot the ball as badly as I have seen them shoot it all year, from everywhere. LSU defended well, but my complaint regards missed layups and missed wide-open jumpshots. Julius Randle must have missed five layups himself. Alex Poythress missed a dead-bang unguarded two-handed layup. Andrew Harrison missed two or three relatively easy layups. All in all, Kentucky missed nine layups. LSU missed a much more reasonable four.

Nevertheless, in spite of all the badness of this game, the Wildcats managed to pull it out on a last-second Julius Randle stick-back. This was the point at which I began to identify yet another problem in Kentucky's offense that later morphed into a named phenomenon, the "Dribble Drive Fling and Hope":

Kentucky really didn't play that badly in this game, they mostly just shot the ball badly. Their shot selection was okay, but there were still too many lobs when there was nobody to lob to, and too many breakdowns on defense, particularly in transition.

Many of us hoped the dramatic victory would bring the team together, but in retrospect, that was just the Big Blue sunglasses getting in the way. What happend was the obverse of that, the dark side of the coin.

Most of us still believed going into the Arkansas game that Kentucky was about to turn the season around. We retained hope that the young Wildcats had just matched up badly with LSU, and that Kentucky would avenge the defeat Arkansas dropped on them in Fayetteville with a walk-off put-back slam.

What happened was a game in which Kentucky did exactly what they did against LSU, only worse. The Wildcats missed 19 layups. This was also where it became obvious that the Kentucky offensive strategy... wasn't:

Does this team really believe that running down the court and flinging the ball at the rim hoping somebody will put it in is a coherent offensive strategy? Calipari has clearly confused this bunch with facts. I know Kentucky can rebound, and I know they should drive the ball, but it would seem to be necessary to find open shots — and make them — if the Wildcats hope to win basketball games. That requires more than just random drives to the rim and wildly flinging up a shot or a lob.

You can see the DDFH becoming more fully-formed. It only lacked a name. But my frustration was encapsulated here:

You all know that I am mostly an optimist, and if I could find any way to put a lipstick on this pig, I'd try. Unfortunately, some lips are too ugly to paint, and this is one of them. This game was a frightful mess of fail, and that's all there is to it. Calipari said last night that Kentucky "...took a step back." To me, it was more like a 100-yard dash followed by a triple-jump backward, if that's even athletically possible.

At this point, dark thoughts were beginning to crawl around in the back of our collective brain, as if Pink Floyd's worms were eating into them. We had no idea it would get worse before it got better.

If the Arkansas overtime loss in Rupp Arena was an unalloyed disaster, the trip to Columbia demonstrated that no matter how dark it gets before the dawn, it can always get even darker, and it did. Oh, boy, did it.

Kentucky went down to the Palmetto State and completely failed to fire. There's no real need to relive this particular nightmare other than to note it was responsible for coining the fully-baked DDFH, which came to epitomize the second half of Kentucky's season:

Obviously, Kentucky must now try to figure out what is going wrong. Of course, most of the Big Blue Nation could tell them that the offensive strategy I have helpfully labeled Dribble Drive, Fling and Hope (DDFH) is not only not a coherent offensive strategy, it is an ineffective one. Kentucky, coming into the SEC season, was one of the most efficient offensive teams in the country. Somehow, in two months, they have become one of the most inefficient offensive teams in the country.

It was also the point at which reality set firmly in even the most optimistic of our collective psyches, as evidenced by this paragrap:

This is the inflection point we have all been waiting for. This is where the season either collapses into disarray, or the team rebuilds itself into something better. I have no idea which one will happen and neither do you. Meltdowns like this don't always mean collapse, although there are plenty of examples where the team does disintegrate (see Kentucky Wildcats, 2013). If we see that, I won't be surprised. Having said that, the alternate outcome is also possible. We'll just have to wait and see.

I was wrong, and right, at the same time. It wasn't quite rock bottom, although it was near enough. Kentucky would go on to defeat an offensively unfortunate Alabama team in Rupp Arena by a narrow margin, putting up a horrid 0.96 points/possession in the process.

Then came the rematch with Florida, a chance for Kentucky to put "paid" to some of the miserable games in recent memory by defeating the nation's #1-ranked team. Predictably, the optimists among us expected too much.

By any measure, this game was a beat-down. A vastly superior (at the time) Florida team on senior day simply dominated Kentucky in a way that UK had not been dominated since the 2013 Tennessee game. Kentucky was uncompetitive for 75% of the game, much like the contest against LSU in Baton Rouge.

Midway through the second half, Kentucky made a significant run to knock a 21-point halftime lead to just six, but that was fool's gold. The Wildcats went on to win the second half by only 2 points, 19 points short of victory. It was a thunderslap into the dark recesses of rank disappointment, where very few #1 pre-season teams have ever been, if any. It was a full-fledged embarrassment that forced any optimism for the rest of the season into wholesale recalibration, or downright apathy for those unable to adjust to the humiliation.

Consider this prophecy from the post-game thread:

Of course, a deep run in the NCAA Tournament is still possible. Just as youth taketh away in games like this, it can also giveth in the form of unexpected cohesion and good play. No, I'm not betting on that and neither should you, but unless you've given up (and I'm sure some of you have), that's about all you have to hope for. It's not a good feeling, know, but it will have to do.

Well, maybe not prophecy. More like hopeful possibility-mongering. Alas, that was all I had left at this point, besides this wistful conclusion to the postmortem:

I know that most of you have little hope for Kentucky moving forward, and I can't say I blame you. To me, though, this team is still capable of suddenly waking up and discovering that they are much better than they seem to think. No, it isn't likely, but when you get to this point in the season, hope is pretty much all you have if your team still hasn't showed itself to be a contender, and this Wildcats team most assuredly hasn't done so.

Sometimes, hopes have a way of coming true, and to the surprise of nearly everyone (except perhaps themselves), the Wildcats were about to emerge from their dark journey into incompetence into the light of the "second season" — tournament time. It would be a memorable one.