The Wildcats defeated the Ragin' Cajuns of Louisiana Lafayette last night, and goes for the semifinals against Alabama tonight.

Yesterday, the Kentucky Wildcats softball team won their inaugural Women's College World Series game, an impressive victory over the very talented Louisiana-Lafayette Ragin' Cajuns team that is no stranger to the WCWS, having been there a total of six times. This was a huge, program-changing win for the Wildcats, and places them in the winners bracket. Tonight, they'll face off against the Alabama Crimson Tide, a fellow SEC member.

Yesterday, Jords, whom you all know as our outstanding women's sports blogger, Interview with 103.7 The Game about the game between the Ragin' Cajuns and the Wildcats. She did an absolutely outstanding job, and you should give it a listen even if that particular game is over. You never know, we could be facing ULL again in the WCWS, and I think Jords absolutely set the standard for how to do a radio interview — she's raised the bar for the rest of us.

I was personally unable to watch the game, but there are several good articles covering the game. First, let's go to SB Nation's Crimson and Cream Machine, who has been providing us photos and coverage from Oklahoma City. First, there is this post with the post-game interview with Rachel Lawson. I think it's really cool that a team like Kentucky, who is seeing a really huge crowd for the very first time, has been able to rise to the moment.

Then, there is this review of the game:

Aided by a ULL fielding error, the Wildcats were able to get Nikki Sagerman across the plate in the top of the first but the Cajuns quickly answered in the bottom half when Lexie Elkins left the park and the two teams were off to a fantastic start at 1-1 after the first frame. However, from that point on the Wildcats would settle to dispose of ULL in a very business like fashion.

The NCAA official website also has a look back, including all of the NCAA rookie teams this season:

"I didn't know what to expect because in the middle of the third inning, [Christian] Stokes goes 'wow, look at all the people,' and she was on deck," Kentucky head coach Rachel Lawson said. "I said, 'wow, look at the ball.' So I'm really proud of my team for the way they came out and played [Thursday].

Classic Rachel Lawson. All business. That's how we like it.

Let's take a quick look at the bracket: 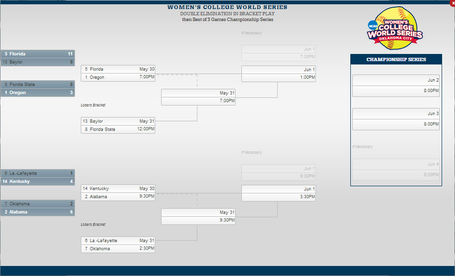 This has to be one of the most exciting years in a long time for Kentucky non-revenue sports. Obviously, a win by the Bat Cats over the Kansas Jayhawks today will make it even more exciting. Right now, though, the softball team is making some serious noise, and a win tonight will be cause for even more excitement.  As always, we'll have a game preview and open thread with Jords doing the honors, and I hope to be able to participate as well tonight.

This should be lots of fun, Wildcats fans. Sit back and enjoy some baseball and softball. Basketball and football will be back soon enough — lets give these other fine teams some support as they try to set new standards for success.