Kentucky Football: The 2014 Football Spring Scrimmage Is Upon Us

An assortment of thoughts heading into Saturday's spring game.

Share All sharing options for: Kentucky Football: The 2014 Football Spring Scrimmage Is Upon Us

This Saturday the University of Kentucky's football team will hold a public scrimmage that will officially conclude the 2014 spring practice period. Some question if spring practice is actually beneficial. And it's a good question! For the experienced players it may not be, but for the inexperienced players and the coaches it certainly is of value. Particularly for the coaches. It gives them a month to evaluate their roster and to experiment with different schemes and positional changes. Spring practice is kind of like a new restaurant having a "soft opening" with invited guests before the doors really open and reality strikes. What the coaches are learning this spring - both good and bad - they preferably don't want to learn for the first time in August.

Another question: are spring scrimmages beneficial or are they largely just fan service and recruiting events? Scrimmages may not be beneficial for teams at most schools.  For the coaches at UK they've had the last month to evaluate players, and one more scrimmage probably only has a marginal impact. There will be a few positional battles that are tight enough that the scrimmage will matter though - namely, the quarterbacks.

At this point, what we have learned the last month won't be changed by Saturday's scrimmage; likewise, what we've yet to learn probably won't change after Saturday either.

What Have We Learned

Here are some things that seem pretty clear: 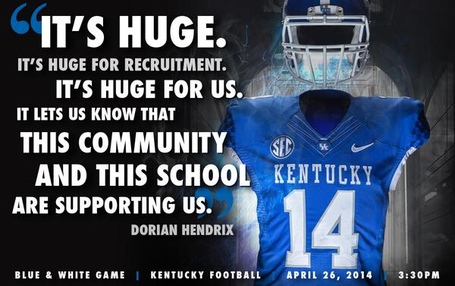 What Have We Not Learned?

What we haven't learned can largely be attributed to mounting injuries keeping players off the field. Injuries will also prevent some of UK's best players from competing against each other in the scrimmage.

What To Focus On

The scrimmage will feature the first team offense and defense "against the rest." Stoops has remarked that in order to keep injuries down the scrimmage will go quickly. That probably means a running clock of some kind. Also likely will be vanilla offensive and defensive schemes. The scrimmage probably won't tell fans a lot given these constraints. Does it mean much if Cody Quinn shuts down the second or third string receiver? Is it significant if Drew Barker and Ryan Timmons connect on a 65 yard touchdown pass against the second or third string secondary? Maybe. Maybe not.

Most importantly, the scrimmage should be fun for the fans and the recruits in the stands while the players on the field stay injury-free. For the players a summer of "voluntary" workouts beckon.