At the end of the day, it all begins with recruiting for Kentucky

As the dust settles from National Signing Day, Kentucky finishes with a top 20 recruiting class. The movement is in the right direction and the gap narrows for the second straight year.

Share All sharing options for: At the end of the day, it all begins with recruiting for Kentucky

For decades, Kentucky fans were fed the pabulum that talent is developed and stars don't matter. Those who tried to convince everyone of that false belief pointed to players such as Randle Cobb, Wesley Woodyard, Danny Trevathan, Jacob Tamme and others to prove their point. The sad fact is that those players are the exception rather than the rule. If you consider how many players have passed through Commonwealth Stadium over the decades of the Dark Ages (pre-Stoops), you can easily see the fallacy of the argument. Talent matters. If it didn't matter, why hasn't Kentucky been successful while teams such as Alabama, Florida, Auburn, LSU, Florida State and many others have been successful? Even Vanderbilt under James Franklin improved while Kentucky languished.

Mark Stoops obviously doesn't believe that stars don't matter. Stars are merely an indicator of potential. That potential is based on talent at the high school and junior college level. It doesn't mean that the high star rating will be successful at the collegiate level, but it does mean that it is far easier to develop the more talented than the less talented. So, what does Mark Stoops do? He and his staff have elevated the talent level that Kentucky recruits. The numbers speak for themselves. The 2013 recruiting class took Kentucky's recruiting from a Rivals team ranking of 63rd in 2012 to 29th in 2013. Of the 26 who signed in 2012, thirteen are no longer on the team. Of the 23 who signed in 2013, thirteen saw game action as freshmen or first year JUCO players. Six (offensive or defensive) linemen were redshirted. The guys in the trenches determine the future.

After suffering through a second consecutive 2-10 season, Kentucky's 2014 recruiting class is even better than the 2013 class as a whole. That doesn't diminish the talent signed last year. It only adds to the talent pool. Many are asking how has Stoops & Company accomplished this level of success in recruiting. What motivates these talented players to sign with a school that has no tradition with a life time losing record?

1.       The Big Blue Nation is one of the nation's leaders in supporting our program via social media.

2.       Kentucky has one of the most innovative training and conditioning programs in the nation (which Florida State also uses).

3.       Kentucky has committed to $100 million in facilities upgrades at Commonwealth Stadium

4.       Kentucky has obtained private funding for another $55 million for upgrades to the Nutter football complex.

5.       Kentucky sells the opportunity to play in the best conference (by far) year in and year out.

6.       Kentucky sells the opportunity to be a part of something special, i.e., waking the sleeping giant.

7.       Kentucky is no longer afraid to go after talented players for fear of wasting time and effort. For instance, some experts are saying that Kentucky's 2015 class will be higher ranked than the 2014 class.

8.       Kentucky added Ohio as one of its hunting grounds because the coaching staff has roots in the Buckeye State.

9.       The coaching staff has a track record at Florida State and Texas Tech.

10.   The coaching staff has top notch recruiters who sell a vision. See the Super Bowl ad.

If you watched Kentucky's live feed for NSD, you know UK and the coaching staff take recruiting very seriously. That is significant and it, along with the signing class, created a national media buzz. Landing, arguably, the top four players from Kentucky was also huge. Stoops made the comment that he plans on holding the Kentucky recruits that "fit" to Kentucky. Two players were not in the mix. Kentucky offered 3* Reggie Bonnafon, but he was Louisville's all the way. Kentucky did not offer Kentucky's Mr. Football, 3* Nacarius Fant. There had to be a reason for that and must have had to with "fit" because Fant is talented. Western Kentucky landed Fant and he should do well for the Hilltoppers.

I'm sure others can find more reasons, but the point is the foundation is being laid because Kentucky is doing what the best do. The last two national champions, Alabama and Florida State, have had their issues to overcome since 2002. The same goes for Florida, Auburn and LSU. There is a correlation between national champions and recruiting and the difficulty each team has faced at one time or another. The graphic below shows you just how startling UK's recruiting results have become with just the last two recruiting classes. 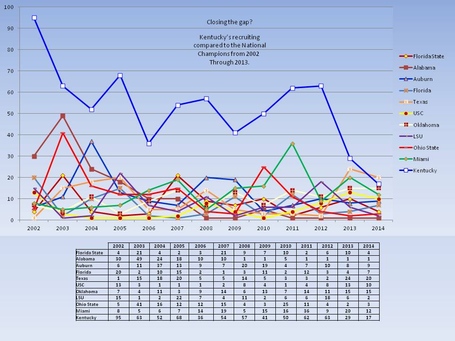 A picture, as they say, is worth a thousand words. Winning football has a direct correlation to recruiting and Kentucky is making a dramatic move to join the big dogs on the front porch. While it remains to be seen if the Wildcats can translate the recruiting success on the field this year, it is only a matter of time before it happens. I don't need to remind Kentucky fans of the defensive prowess of Mark Stoops and T.J. Eliot at Florida State or the offensive prowess of Neal Brown and Chad Scott at Texas Tech. Success on the field isn't a matter of "if." It is a matter of when.

Alabama and Kentucky were placed on probation during the same time frame and you can see what Alabama's tradition accomplished as well as Kentucky's lack of tradition accomplished. Each school had an opportunity to commit to football and while Alabama always had that commitment, Kentucky's commitment to football began with the hiring of Mark Stoops. Even with Alabama's tradition, the Tide didn't win a national championship from 1993 until 2009. Nick Saban was hired by Alabama in 2007. Saban also brought LSU its second national championship in his fourth year in 2003. The first title won by LSU was in 1958. Kentucky still has a way to go to, but the recruiting gap is closing.

The chart below shows just how dominant the SEC is when it comes to recruiting. 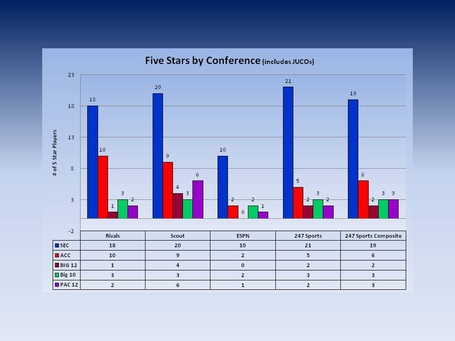 Kentucky isn't going to the very top any time soon, either in recruiting or on the field. The Wildcats are going to have to shoot for the SEC East and beating Louisville with some consistency before lofty predictions can be made. However, Kentucky is, indeed, closing the gap on all counts as you will see in the graphs below: 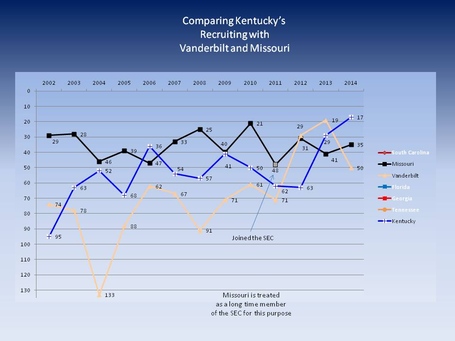 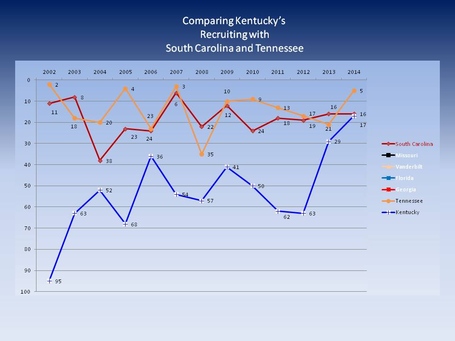 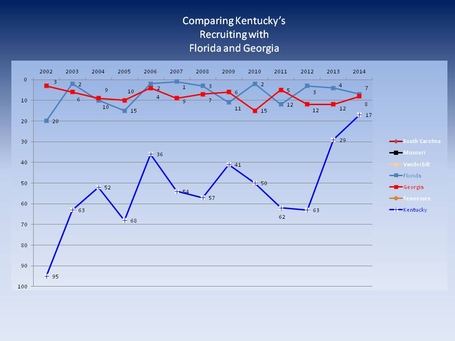 With regard to Louisville, we have to face them every year, at least until either or both the ACC and SEC move toward a nine game conference schedule. Even though Louisville will have a tougher schedule in the ACC, they've proven over the years that they can develop players even if their recruiting under Bobby Petrino might not match up well with the top of the ACC. His recruiting classes (Rivals) at Arkansas were #36 (2.88), #16 (3.26), #49 (2.96), and #24 (3.07). Before he was dismissed (April, 2012), he had signed his 2012 class which ranked #34 (3.04). No one knows yet how the scandal will affect his recruiting at Louisville, but the results for this year were not all that great. 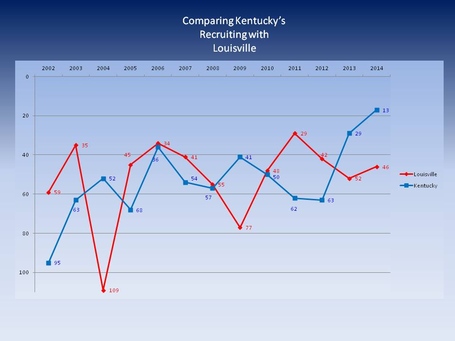 The bottom line for Kentucky is that the university and those involved in football have made the commitment towards excellence. We fans, just have to go along for the ride and support the football effort. That means when Stoops asks the fans for help, it must be given. Right now, they are asking that you show the BBN's love for our players and our recruits and they are asking for 60,000 fans to show up for the spring game. Is that too much to ask? Mark your calendars: April 26th. Be there.