This series is about the number of offers required for each position to get the commitments each team needs and ignores talent which will be addressed in the last part of the four part series. Every team has to make a lot of offers for some positions in order to sign just a few on National Signing Day.

In part 1 of this series, I compared Alabama's and Kentucky's recruiting and the SEC-E and SEC-W in terms of numbers of offers and enrolled commitments without regard to ratings and rankings. Here's the two graphics that illustrated the differences, just to refresh your memories. (You'll need to click on each slide to enlarge) 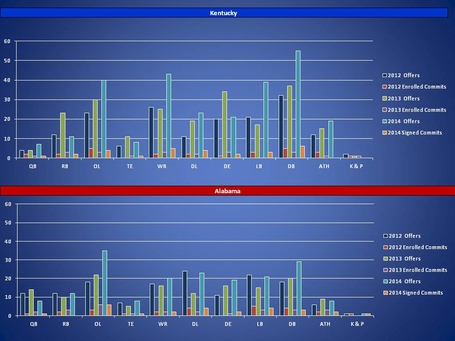 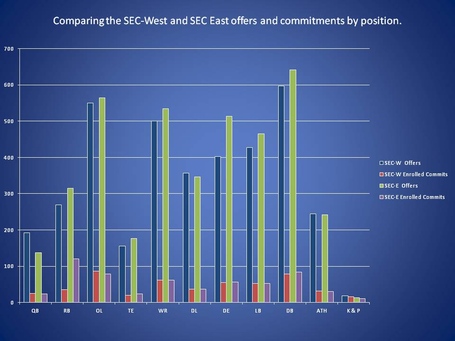 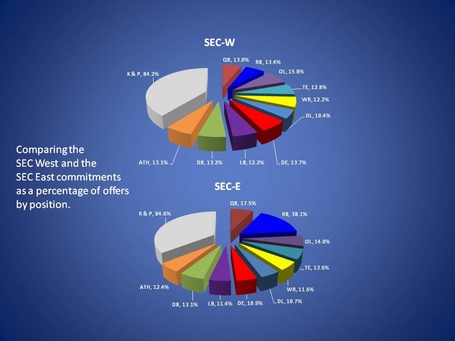 In part 2, I am doing the same comparison for the teams in the SEC-East because Kentucky has to play each team every year. I'll begin with Vanderbilt and Tennessee.

When James Franklin left Vanderbilt just a couple of weeks before the 2014 National Signing Day (NSD), he did damage to the Commodore's 2014 recruiting class by taking several Vandy recruits with him to Penn St. Vanderbilt's team ranking fell to 96th, but once the new coach, Derek Mason, was hired, he took them up to a respectable rank of 49th. While that ranking is respectable, in the SEC it was good enough for last place in the conference. Mason didn't have much time to salvage the Vandy class because he was also trying to build a staff at the same time. So, the numbers for Vanderbilt are skewed by Fanklin's departure. Over the three year period, Vanderbilt put out 720 offers and had 69 players enroll or commit by signing.

Butch Jones replaced Derek Dooley at the end of the 2012 season, but the difference in the number of offers between the two coaches is minimal. Dooley was a good recruiter, but his staff was terrible at coaching. Butch Jones hit the ground running and has put together two good recruiting classes. 2013 was ranked 21st and the 2014 class was ranked 5th by Rivals. What you'll see on the graphic below is very similar to Kentucky and Alabama in terms of offers per position. DBs, WRs and OLs received the most offers. Tennessee has offered 810 players and enrolled or had signed commitments from 80. 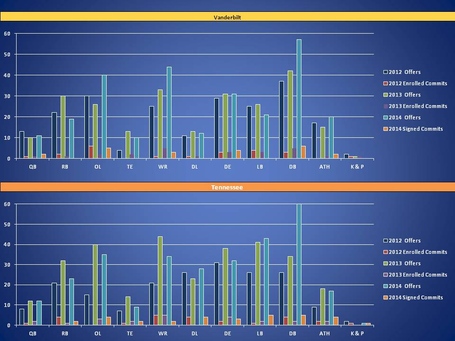 Here's the success rate of both teams by position. Wouldn't it be great if every team had a success rate for other positions as they do with Kickers and Punters? 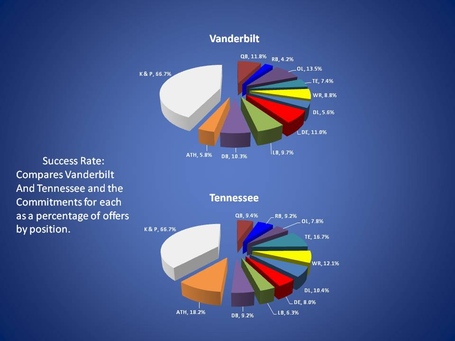 Not all coaches use a shotgun approach and are less generous with offers. Steve Spurrier, Gary Pinkel, Will Muschamp and Mark Richt are pretty stingy with offers, yet have success rates as good or better than those coaches who shotgun their offers.

Steve Spurrier has been around the SEC a long time, first at Florida and at USC. He hasn't had quite the success with the Gamecocks as he did with the Gators, but the last couple of years South Carolina has performed better on the field as the Florida offense has declined. South Carolina has offered 472 players and enrolled or received signed commitments from 65 over the last three years. South Carolina's success rate is 13.8%.

Missouri has been a member of the SEC for two years and has been to the extreme in both years. The Tigers suffered a lot of injuries in the 2012 season and didn't do well. But, they beat Kentucky in Columbia. Last year, Missouri won the SEC East championship and lost to Auburn in the title game. Missouri has signed or enrolled only 61 players out of 425 players offered. Missouri's success rate is 14.4%. 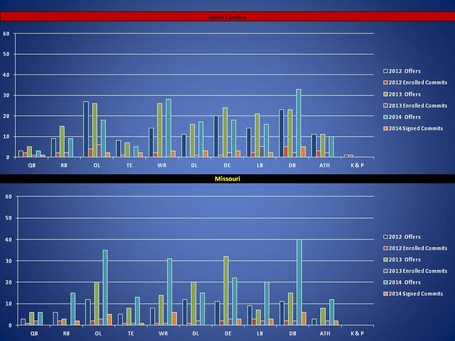 Both charts reflect the low number of offers. The following pie charts show the success rates for each. 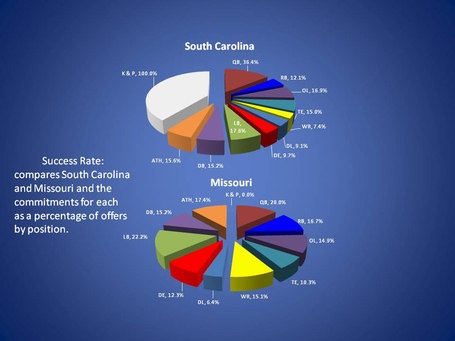 Both programs seem to be very efficient with their recruiting efforts and both have been successful on the field.

Florida, under the guidance of Will Muschamp, is a very different team post-Urban Myer. The Gators were a different team even under Meyer after Tim Tebow left. Florida was once loaded with offensive talent, but the talent moved over to the defensive side of the ball since Muschamp took the reins. There are no Percy Harvins, Jeff Demps or Bakers "the Touchdown Makers." Those days are gone. Muschamp has discovered that you don't win games unless you can score, regardless of how good your defense is. He has recognized it and has replaced most of his offensive coaches with former Kentucky assistants. Joker Phillips was the first, but he has added Mike Summers and Kurt Roper to his staff. Florida is still Florida when it comes to recruiting and they've not really suffered much under Muschamp. For the 2012, 2013, and 2014 recruiting cycles, Florida has offered 510 players and signed or enrolled 74 for an overall success rate of 14.5%.

If you've watched many Georgia games, you notice that Mark Richt never, actually rarely, gets upset during the games. He never seemed the least bit worried during the Tennessee game. The guy is actively involved with his teams during the games, but he never shows emotion. That's kind of the way he is with recruiting. Over the last three cycles, Georgia has put out only 362 offers and signed or enrolled 70 players for a 19.3 success rate. Very efficient best describes Bulldog recruiting.

Here's the comparison between Florida and Georgia: 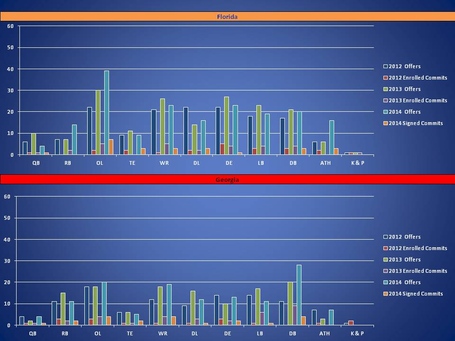 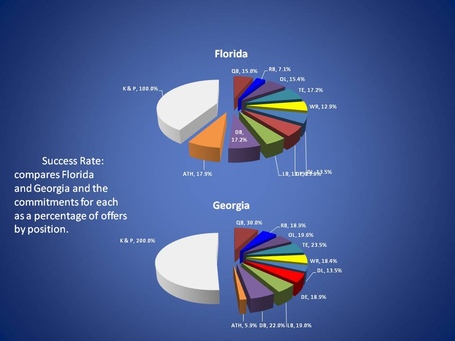 In spite of all that, Mark Stoops and his staff have improved recruiting, as determined by its Rivals Ranking from 63rd for 2012 to 29th for 2013 to 17th for 2014. Stoops & Company has had to work harder than any previous staff to get this kind of improvement. The number of players offered has climbed from 169 in 2012 to 216 in 2013 to 266 for the 2014 class for an average class size of 25 players for the three year period. Kentucky's overall 11.9% success rate tells you just how hard this staff has worked. 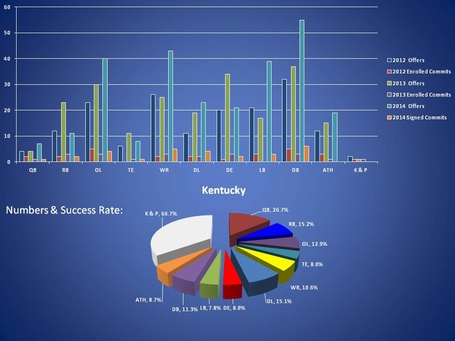 So, how does Kentucky stack up with the rest of the Sec East? The Wildcats currently are the 5th best of the seven teams in the division. 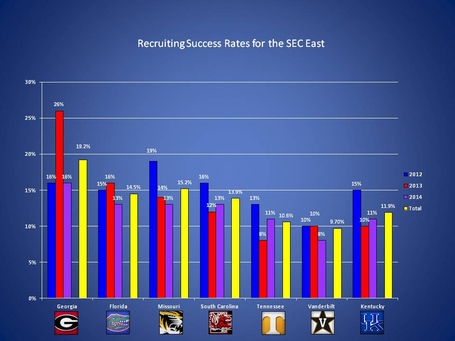 In Part 3, I will compare Kentucky with the SEC West. If you think it's tough here in the East, be glad the Cats are not in the West.

As always, thanks for reading.