A Review of Kentucky's Basketball Rivals

The BBN is not always in agreement as to who our rivals are. That simply reflects the diversity of a large fan base. I think most will agree that most on my list are genuine, based on the reasons of those on my list. One thing is for sure, Kentucky may play more rivals this year than usual. Three will only have their shot at the Wildcats in the NCAA Tournament and that depends on the selection committee and the team's success during tournament play.

Share All sharing options for: A Review of Kentucky's Basketball Rivals

Kentucky fans tend to (sports-hate) hate Louisville, Duke, North Carolina, Kansas, UCLA , Connecticut, Florida,  the "once upon a time rival" Indiana, and Tennessee.  We have our reasons, ranging from the little brother syndrome that we are forced to endure to just the pure joy of silencing "Rocky Top, Whooooo!, Rocky Top, Tennessee."

Here's some information on Kentucky and our rivals based on  national championships: 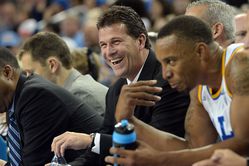 Everyone, including Kentucky, is still chasing UCLA's 11 National Championships. Kentucky needs three more titles to tie the Bruins. UCLA's name is synonymous with former Head Coach John Wooden, the Wizard of Westwood, who coached UCLA from 1947 through 1975. His last game was in the 1975 NCAA Championship game against Joe B. Hall's Wildcats which UCLA won 92-85 in San Diego. That was his first victory over Kentucky in four tries. Of UCLA's 11 titles, 10 belong to John Wooden.  UCLA won another championship in 1995 under coach Jim Harrick.

The two teams will meet for only the 11th time on December 20th in Chicago. Just keep in mind that UCLA is a rival only because of the 11 championships. 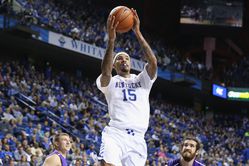 In addition to leading the nation in all time wins. Kentucky is #1 in all time win percentage. Kentucky is the only school with five coaches who have won a NCAA championship: Adolph Rupp (4), Joe B. Hall (1), Rick Pitino (1), Tubby Smith (1) and John Calipari (1).

According to the Wall Street Journal, Kentucky has the most bragging rights in college basketball. The WSJ even provides a chart to support their claim. The chart is sortable although I have no idea why.

The North Carolina Tarheels would have to be considered the second best program even though they're # 3 in all time wins. The reason is due to their record 18 Final Four appearances. Three UNC coaches have won national championships at North Carolina: Frank McQuire 1957, Dean Smith 1982 & 1993 and Roy Williams 2005 & 2009.

That 2005 title could be vacated in the near future due to the academic fraud scandal, according to a USA Today article this week. For details on the scandal, the Raleigh Observer probably has the best coverage on why the 2005 title is in question.

When the two teams meet on 12/13 the scandal will take a back seat because North Carolina is one of the few programs to hold a winning record against the Wildcats. UNC has won 23 and UK has won 13. In the five times the two have played since Calipari was hired, the Cats stand at 3-2. 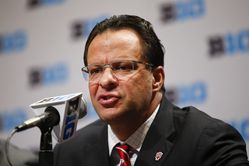 The series ended after the 2011-2012 season when Coach Tom Crean and Coach Cal could not agree on a venue for playing future games. Indiana wanted the series to remain on a home and home basis while Kentucky wanted a "neutral" site. Kentucky went so far as to offer to play all the games at Lucas Oil Stadium in Indianapolis, but IU wouldn't budge. Since then, Indiana has had difficulty finding big name opponents for a December game.

If you'll recall, Indiana fans rushed the court after beating 73-72 Kentucky on a last second shot. Kentucky fans felt that Indiana, as a supposedly storied program, pulled a "bush league" move by raising a banner at Assembly Hall to celebrate their victory. Kentucky avenged that loss 102-90 in the Southeast Region semi-finals in Atlanta the following March.

Indiana, under Tom Crean, has become an irrelevant program and they've had their problems with players leaving, players failing drug test and injuries. For those of us who relished going to play Indiana in the RCA Dome and going to dinner at St. Elmo's or Ruth's Chris after the game, the once great series with IU is now a sad state of affairs simply because the Hoosiers believed they were more important than the facts have shown since Crean's arrival. 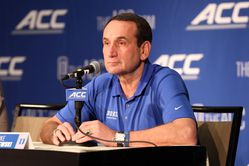 The Kentucky-Duke rivalry is mostly based on NCAA Tournament games with a few other special events thrown in the mix. Since 1963, the two teams have met in the Sugar Bowl Championship in 1963, the UKIT Championship in 1969, the 1979 and 1988 Tip-off Classic and the 1998, the 2001 Jimmy V. Classic and the2012 Champions Classic.  In the big dance, Kentucky beat Duke in the 1966 Final Four, the 1978 championship game, and the 1998 Southeast Region final. Duke has beaten the Cats in the 1980 Mideast Semifinals and the 1992 East Region Finals in overtime. While Duke has won the last three matches, Kentucky leads the all time series 11-9. The 1992 overtime game is considered the best college game of all time. ESPN and CBS won't let anyone forget the Christian Laettner shot that won the game. 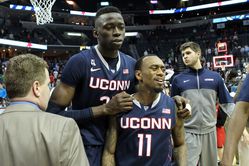 Kentucky and Connecticut have played five times and has won four times, three times in the NCAA Tournament, and also in the 2010 Maui Classic. Kentucky lone win came in 2009 in the Big East Invitational. Two of UConn's wins came in the 2011 Final Four and last year's championship game. The Huskies have win titles under two coaches, Jim Calhoun and new coach Kevin Ollie. The rivalry is based solely on NCAA Tournament games and I don't believe either team gives the other team much thought until tournament time, and only then when they play each other. 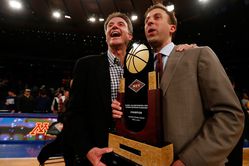 The birds with teeth have had Big Blue envy since they were in the Missouri Valley Conference. Kentucky refused to play them for years until the political pressure became so great that Joe B. Hall was forced into the rivalry. Denny Crum made Louisville relevant with his two national championships and the hiring of former UK coach Rick Pitino fueled the fire.  According to their media guide, Louisville boasts the following accomplishments:

The University of Kansas is one of the most storied programs in the NCAA, particularly the coaching tree. Their first coach was none other than the inventor of the game, Dr. James Naismith. Forrest "Phog" Allen is another name to remember if you are a college basketball fan. He coached at Kansas for 39 years. Allen brought Kansas their first NCAA Tournament championship in 1952. Larry Brown coached Kansas to another title in 1988 with "Danny & the Miracles." Under Bill Self, Kansas won its third championship in 2008. 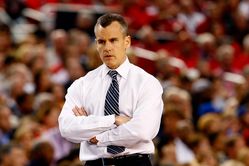 Florida's Billy Donovan put the Gators on the map with his back to back championships in 2006 and 2007. Florida's all time record against Kentucky is 37-94. Donovan's record stands at 17-26 against the Cats. Kentucky tried to hire the former UK assistant at least once. Many wanted him as Rick Pitino's replacement. Had he not turned down the Kentucky offer when Tubby Smith left for Minnesota, John Calipari would not be our coach today. Donovan has taken the Gators to three championship appearances. Their first was a loss 89-76 to Michigan State in Y2K in Indianapolis.

Florida hasn't yet earned an elite status on the national scene, but they do have that ranking in the conference. Year in and year out, since Donovan arrived, the Gators have been Kentucky's biggest conference rival. 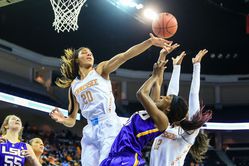 Yeah, I put up a photo of the women's team which is infinitely better than the men's team. Call it revenge for Saturday's football game. You'll also note that UT and IU are not of larger font headlines.

Tennessee is included in this list of rivals due to the fact that they have the best record (67-150) of any SEC team against Kentucky. Tennessee is the only SEC team to have beaten Kentucky five straight times and they've done it twice, beginning with a stretch from 2/26/1916 - 3/3/1917 and they did it again from 2/15/75 - 3/5/77. Tennessee head coach Ray Mears was one of Kentucky's fans all time coaches to hate. On road trips, Mears would have his team come on the court on unicycles while juggling oranges which enraged the SEC home team fans, including Kentucky's, eventually began pelting the Vols with oranges. Tennessee handed #1 ranked Rupp's Runts their first loss of the season in Knoxville on 3/5/66. Then there was the Bernie & Ernie Show who never lost to Kentucky. Bernard King and Ernie Grunfeld beat Kentucky five straight times, beginning:

Mears final record against Kentucky was 15-15. The BBN's hate for Bruce Pearl when he coached at UT simply wasn't in the same league as their hate for Ray Mears. Unfortunately, Mears died in 2007.R.I.P.

These schools are Kentucky's main rivals, at least in my view. I fully expect to meet one or more in the NCAA Tournament this year. The most likely candidates will be Duke, Kansas, North Carolina, Louisville, Florida and Connecticut. The round will be the question. You almost have to assume that the selection committee will provide Kentucky with the stiffest competition they can come up with. We may even get the opportunity to play (big whoop) Indiana ... if they make it to the tournament. Wouldn't that be "special?"

Feel free to add your own to the list of Rivals. Just for what it's worth, if you don't like to pay guys like Pomeroy, you can get the same info, including the four factors, over at Statsheet.com.