There are fewer things which cause more angst for UK fans than the swing pass or a quick screen. If the play does not gain substantial yardage, it must be a bad play call. Many times I agree with this position, but after reviewing the video of the LSU game, I agree most were the right calls.

Here is one early in the game. UK will motion to an empty set and snap the ball after the back is outside of the linebacker. LSU chooses not to bump a linebacker out which leaves UK with 2 blockers to block two defenders and a good athlete with the ball on the outside. The problem occurred when both LSU defenders easily defeated the UK perimeter blocks and stopped the play for no gain. That is fundamental and if the offensive coordinator can't anticipate getting 5 yards against that look, it will indeed be a long game. 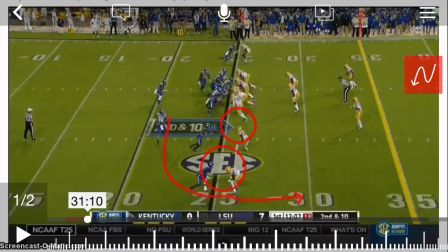 Another example where the play call was good, but the LSU defender was just too fast and stopped the play. This time Brown brought Ryan Timmons on orbit motion across the formation and LSU again chose not to bump out a linebacker. This gave UK two players to block two defenders with a safety 14 yards deep. Again, the ball in an athlete's hands on the outside with everyone blocked. This should be a 5 yard gain before any contact. However, LSU safety covers 14 yards before Timmons can get to the line. Nice call until you realize you can't block a safety who is 14 yards deep to defend the pass and he can still stop the run at the line. 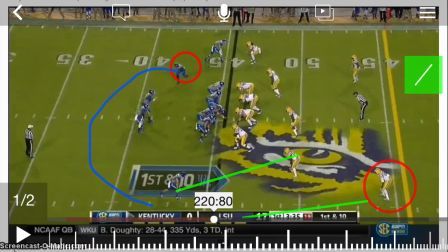 Here are several cutups I narrated a little more in depth if you are into video review.

There was much disagreement about the QB draw play which was called numerous times. This is another case where Pat rushes the play and does not allow the natural stretch to take place. Again, UK will go to an empty set and this time the linebackers will bump out and over. This leaves a 5 man box and UK has 5 players to block. 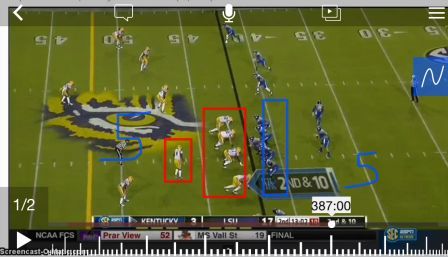 After Pat takes the snap, he almost immediately goes upfield. As a result, the blocker assigned to the middle linebacker has not had the chance to move downfield closer to his block. As a result, he is being asked to block a superior athlete wide open space. That is a nearly impossible task. He missed the block causing Pat to slow down and allowing the weakside defensive end to come all the way around and make the tackle. Again. if the offense cannot run against this front, it will not matter what play the offensive coordinator calls. 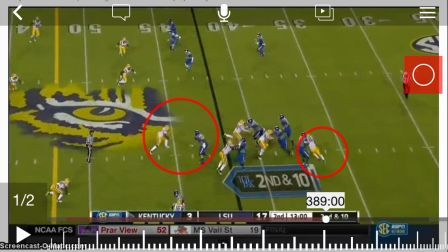 I broke this play down in this video.