January 15th ended the last dead period for the 2014 recruiting cycle. Between now and Signing Day on February 5th, there is going to be plenty of action (as if there hasn’t already been since Texas began the annual coaching changing of the guards).

The recruiting cycle gets turned on its head when the battle for new coaches begins as those who move on try to take their recruits with them to their new digs. These coaching changes from the new hires to the ones who are moving on to another school make new recruiting opportunities for some schools and create disasters for others. There are twenty days left until Signing Day and there are already winners and losers.

Let's start with Texas. The Long Horns were the first major program to make a move by forcing Mack Brown's retirement. Texas wasted no time in finding a replacement and hired Charlie Strong away from Louisivlle. Then Bill O'Brien announced he was leaving Penn State who responded by hiring James Franklin away from Vanderbilt. As everyone knows, Louisville hired Bobby Petrino away from Western Kentucky. The Hilltoppers named Jeff Brohm as their new head coach.

Vanderbilt just hired Derek Mason, Stanford's defensive coordinator. He will have his work cut out for him: hiring a new and recruiting and trying to hold on to those who have committed. According to some reports Vanderbilt only has three firmly committed while the rest of the class is exploring options or are going to Penn St.. Tony Franklin thanked the Vanderbilt fans for their support (a must read).

This last open contact period is a period where recruits change their minds without the coaching changes which only add to the chaos. The biggest impact may not be the head coaching changes, but those assistants who move on, particularly the offensive and defensive coordinators. The movement of these coaches add to the recruiting chaos. Kentucky, so far, hasn't lost a coach, but Jimmy Brumbaugh and Derrick Ansely have been mentioned as candidates. That is pretty amazing considering Kentucky's record the last two years. Ansley and Brumbaugh, however, are well known as good recruiters and that makes them desirable commodities.

As you already know, Todd Grantham, Georgia's defensive coordinator, was hired by Louisville and Florida State's defensive coordinator, Jeremy Pruitt, has replaced him at Georgia. The loser in this movement could be Florida State because some of his recruits at FSU are opting to reopen their recruiting,according to rumors. Kentucky could possibly benefit with their continued recruitment of 4* LB Delvin Purifoy. Stoops and Eliott have been trying flip Purifoy since they came to Kentucky. Pruitt's move can have a positive impact at UGA. Along with Purifoy, the Bulldogs could pick up the following FSU recruits due to Pruitt's move:

Florida's Will Muschamp has been forced to make changes on offense and has hired Duke's Kurt Roper as Florida's new offensive coordinator to replace Brent Pease and he was able to flip 4*DT Thomas Holley from Penn St.

Nick Saban has hired Lane Kiffin as his new offensive coordinator. Kiffin is known as a good recruiter and play-caller. Not so good, however, as a head coach. Hiring Kiffin won't have a negative impact at Alabama.

Urban Meyer hired Penn State's Larry Johnson who was not retained by James Franklin (dumb move). This was after DL coach Mike Vrabel bolted for the NFL. Johnson is a big time recruiter. Meyer wants a national recruiting base and Johnson can provide that which means Kentucky has an opportunity to fill the void in Ohio.

So, how do all these coaching movements affect Kentucky? Other than mentioned above, not much. Lloyd Tubman committed to Penn St. but may take a visit to Kentucky. KSR has a list of targets that is as good as anyone's best guess right now, but things are likely to change between now and Signing Day. Nothing is cast in stone at this point except for the early enrollees. Expect some surprises, but be not surprised at anything that happens because these last 20 or so days are the craziest of the entire recruiting cycle.

The thing you have to remember is a lot of top notch recruits are leaning toward schools who may not have many offers to give. In other words, the supply may exceed the demand. Let's just make a hypothetical assumption that a school can sign 28 players. If you look at the rivals team rankings you can see how many commitments each school already has. For instance, Tennessee has 33. The likelihood of the Volunteers taking another is possible, but you have to assume they will have to tell a commitment, they won't honor their offer because they want to take a higher rated player.

4.       Florida State has no openings unless they suffer some flips

8.       Notre Dame has 6 openings which I consider a winning position

Here's the rest of the SEC and our little brother down the road.

Some of these SEC schools can only sign 25 with a couple of exceptions such as Tennessee and some will over-sign and worry about who can and who won't be able to enroll. Those team members and recruits who enrolled for January will limit every squad to 85 on scholarships (the NCAA limit). August enrollment is where the 85 limit applies for the upcoming season. Larry Vaught believes that Matt Elam is now an Alabama Lean. Stoops is making an effort to persuade T. J. Harrell away from leaning toward Louisville. UK may have a couple of advantages. Chad Scott and Harrell are cousins and UK doesn't have the sleaze that Louisville has. He's taking official visits to both schools, so we may have an indication of his feelings after the visits.

Stoops says he's signing 28 for 2014, but it could be more. Here's a roster breakdown of scholarship players as far as I can determine by recruiting class.

These are the players who I believe have enrolled for the Spring Semester:

2010 Class: 5, including Braylon Heard, who signed with Nebraska back in the day

2012 Class: 15, including the Davis twins who transferred from Pitt

We won't really know the real number until the spring practice roster is released, and there are questions about some walk-ons' status as scholarship players such as J.D. Harmon who may have lost his scholarship when he became academically ineligible. A few others may have earned a scholarship for play during the2013 season.

If the above is correct, that's a roster of 60 scholarship players. The NCAA limit is 85, so that leaves 25 openings. Right now, the unsigned 2014 Class numbers 17 (and counting). That leaves eight scholarship openings.

Here's what I see and you can tell me how wrong I am: (Click on the image for a larger view) 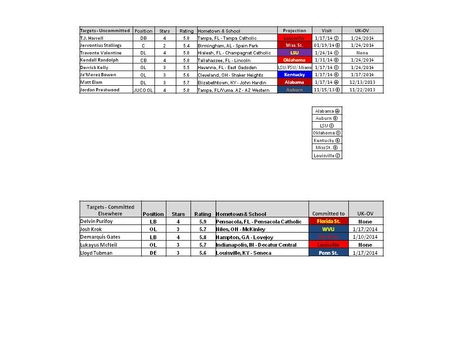 The bottom line here is UK has a shot at those who show up for their official visit. Here's my take: Since Jeremy Pruitt took off for the Peach State, Purifoy could follow. However, Stoops and Eliot recruited him at Florida State when he was a junior and Pruitt sealed the deal. McNeil seems to be ready to flip to The Rush the Court school (IU) if the softer side of Bobby Petrino cannot convince him to stick with the Cards. You know, the side where family is important. Valentine...in my opinion, we have no shot.

So, fasten your seat belts. The ride may be smooth or it could be bumpy. It could jerk you around like the Son of the Beast at Kings Island.