Are Jurich and the Louisville fan base schizophrenic or are they just hypocrites?

Any sane person would be asking, "What are they thinking?" There is something in the water over in Louisville, probably Fluorides, that have affected Cardinal fans. Having a moral compass is a foreign idea in the Great City State of Louisville.

Share All sharing options for: Are Jurich and the Louisville fan base schizophrenic or are they just hypocrites?

When Bobby Petrino left Louisville for the Atlanta Falcons, the Louisville fanbase was livid, calling Petrino a traitor among other unprintable names. Jurich wasn’t happy either.

In December 2008, at the end of a miserable 5-7 season under then second-year coach Steve Kragthorpe, Jurich spoke to Louisville Courier-Journal columnist Eric Crawford about the challenges caused by the questionable recruiting choices made by Kragthorpe's predecessor, one Bobby Petrino. (In a surely coincidental pattern, Arkansas finished 0-8 in the SEC in its second year post-Petrino.)

"... We had to clear out a lot of discipline issues," Jurich said then. "And our numbers suffered. We cleared 21 kids out of here, and that's a lot. That's a big hit for anybody to take ... . I don't know anyone that has. But we want to do things the right way."

So now, Jurich and the fans are just fine with bringing this guy back? What changed? Actually, nothing has changed. Tom Jurich and the Louisville fans have behaved in this manner ever since Jurich was hired at Louisville. UK fans like to call them delusional. It is far, far deeper than mere delusion and hypocrisy. Louisville athletics and Cardinal fans are morally bankrupt and Jurich is leading the charge. ESPN recognizes this and so does Eric Crawford. However, the very best reaction has come from Spencer Hall at Everyday Should Be Saturday (EDSBS).

You don’t realize just how bad they are until you look at their behavior over a period of time. I took the time to map it all out for you from 1997 to today. Click on the images for a larger view. 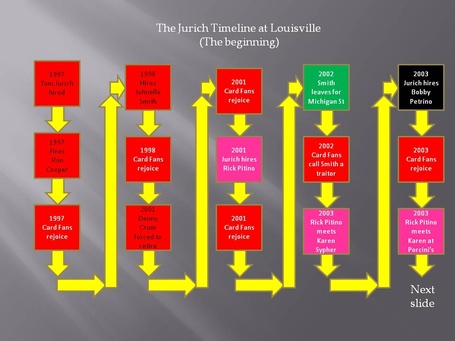 You have just begun following the yellow brick road. Take note of the fan base reactions. 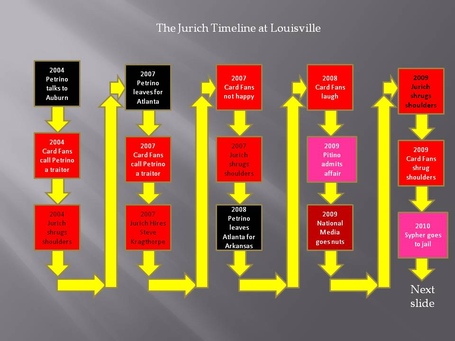 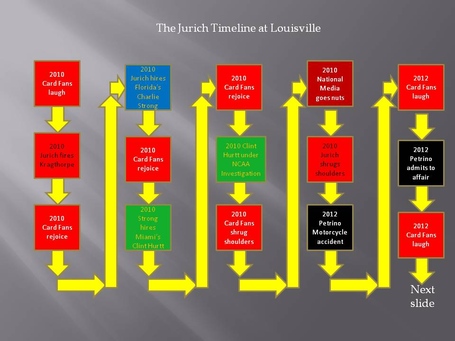 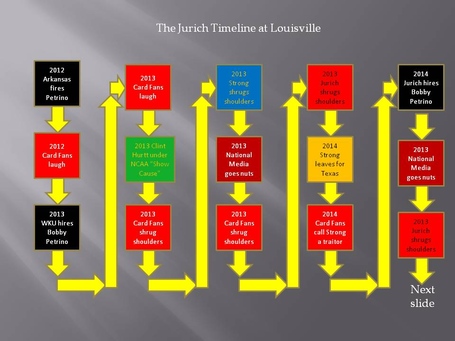 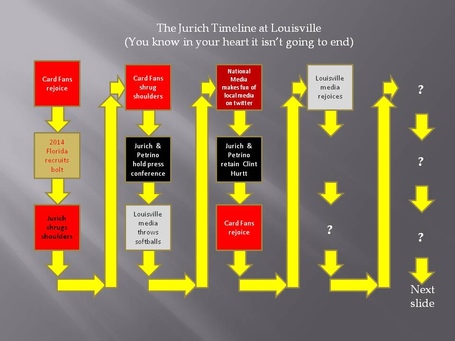 As you can see, when you look at the body of work, re-hiring Bobby Petrino should’ve been expected. People shouldn’t have been surprised because it follows the pattern and the map.

I could have written far more and I left one space blank to maybe add an update.