Welcome to Week 2 of the Virtual Tailgate. Come join me for some tasty beverages and some delicious food before the Wildcats take on the Red Hawks in Lexington.

Welcome to Virtual Tailgate Week 2. Today the Kentucky Wildcats welcome the 0-1 Miami (OH) Red Hawks into Commonwealth Stadium for the first home game of the season.

Kickoff is at noon so fans had better be ready to start the party early. The Wildcats are going to need a wild and rabid crowd to cheer them on to a big victory, so those in the parking lot had better not skip out on any partying.

Many fans will start tailgating before the sun rises, so let's have a breakfast themed menu for today.

How about a classic breakfast drink with a twist of liquor as a nice eye opener: 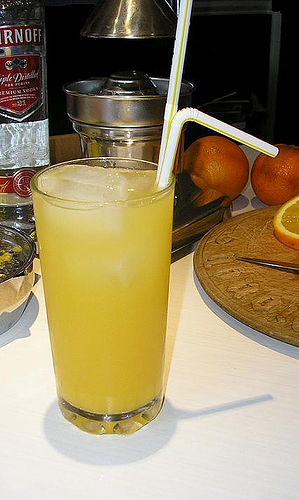 It doesn't get any easier than this. Vodka: check. Ice: check. Orange juice: check. Mix it together, open your mouth and consume. Nothing is easier for a sleepy eyed tailgater to prepare than a screwdriver. (Straw is optional)

How about something to munch on whilst we enjoy our drink: 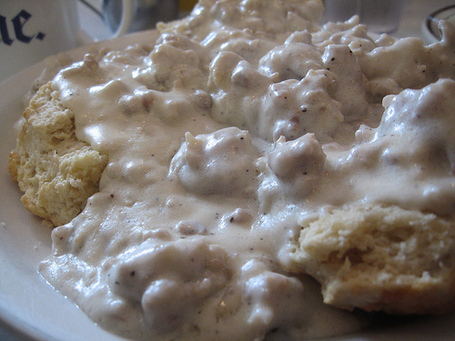 Biscuits and Gravy (via Ron Dollete)

Biscuits with white sausage gravy are the perfect dish to sop up some of the alcohol so we don't become inebriated too quickly.

It's time for the main course. A nice quiche will successfully marry our eggs and bacon into one delectable meal: 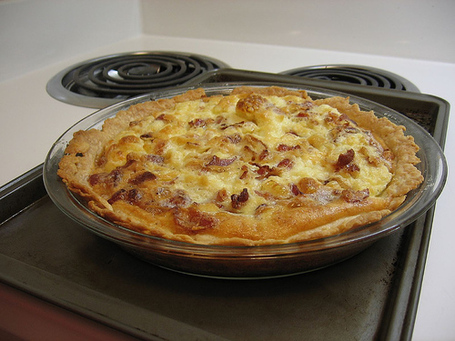 1 sheet of refrigerated pie pastry, ¼ cup of sliced green peppers, 1 tablespoon of butter, 6 eggs, 1-1/2 cups of whipping cream, ¼ unsweetened apple juice, 1 pound of sliced and crumbled country bacon, 1/8 teaspoon of salt, 1/8 teaspoon of pepper, 2 cups of shredded swish cheese, all put together the night before and cooked before setting off in the morning. Delicious and filling.

One cannot live off of quiche alone. How about a nice hashbrown casserole to go with it? 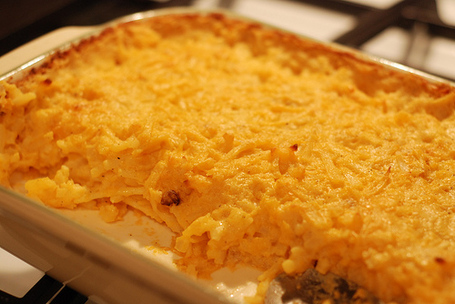 Let's not waste the rest of our vodka. Let's mix it with Kahlua coffee liqueur and some cream to make a tasty White Russian to wash it all down: 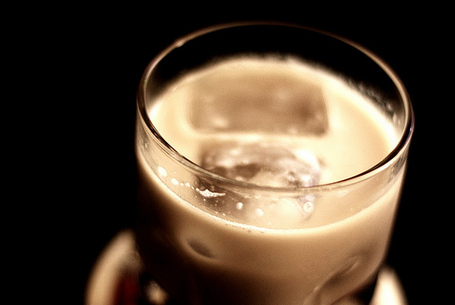 Breakfast has been served and thirsts have been slaked; it's time for some football.

Mark Stoops and his staff are ready to move on from the opening loss to WKU. It's a new day and a new opponent is waiting for the Wildcats on their home turf. There have been personnel changes made at key positions in the hopes of breathing new life into a team that looked to have sleep walked in Nashville last Saturday.

The most notable change comes on the offensive side as Maxwell Smith was named the starter for today's game. Smith is the more polished passer compared to Jalen Whitlow, his running counterpart. Smith led the Wildcats to two scoring drives for a total of nine points in a losing effort. The offense looked to operate more smoothly with him under center.

Ryan Timmons will make his first start as a Wildcat in the H-back position to add speed and open field maneuvering. Demarco Robinson will retain his starting spot and rightfully so. Robinson showcases speed and the ability to rip off large runs on offense and on special teams. Javess Blue will also start this week for the Wildcats.

With the combination of some new starting receivers, a new starting quarterback and what was a mostly effective running game with Raymond Sanders, Jonathan George and Jo Jo Kemp, Neal Brown hopes to open up more of a true Air Raid offense.

The defense fared much worse than the offense did last week. Khalid Henderson lost his starting job to TraVaughn Paschal. The promising junior will hopefully assist Avery Williamson in the linebacker corps and give some relief to a defensive line that struggled mightily against the Hilltopper offensive line.

The secondary is still a work in progress, but true freshman Blake McClain was a highlight. He was all over the field making tackles and causing fumbles. Next to Williamson, he was the Wildcats' best player on defense.

These position tweaks should put Kentucky in a better position to win today and bring the ‘Cats to 1-1. The excitement should be back with an electric home crowd that is looking for big points and the first victory of the year before welcoming the top ten Louisville Cardinals next week.