Tempo-free analysis is all the rage these days. Formulas for the stats are easily available, but the reasons why they are an improvement over per-game equivalents might not be obvious.

Tempo-free analysis has become an increasingly important part of college basketball in the last half dozen years. Sites including kenpom, Statsheet, and Team Rankings have made these stats easily accessible while writers such as Ken Pomery, Sports Illustrated's Luke Winn, and ESPN's John Gasaway amongst a host of others are popularizing their use when discussing college basketball. Coaching staffs across the country are using these ideas to improve the way they prepare for opponents and evaluate their own teams.

Although tempo-free stats have been used on A Sea of Blue for quite a while, I get the sense sometimes from comments that they aren't well understood and their usefulness isn't always clear. To that end I've put together this primer in which the calculation and purpose of tempo-free stats are given as well as some illustrating examples of why they are more useful than conventional box score numbers when it comes to evaluating basketball teams. Also included are high, low, and average values for each statistic from the 2013 season (from Ken Pomeroy's site) so that you get a sense of what a "good" and "bad" mark is for each.

The philosophy behind tempo-free statistics can be summed up in one word: opportunity. The common thread you will see that runs through all these stats are that they seek to take some element of a basketball game and measure it not by how often it happens, but rather how often it happens compared to how many times it could have happened. In other words, tempo-free analysis improves the analytical benefit of traditional statistics by placing them in their proper context.

The basis for tempo-free stats is to view basketball games as a series of individual possessions. This viewpoint started with coaches at least as early as Frank McGuire and Dean Smith at North Carolina, but they were not alone. Their recent popularity is due to Dean Oliver. Oliver played basketball in college and worked as a scout and in the front office for a number of NBA and WNBA teams. He is currently at ESPN. Much of Oliver's work was published in 2003 in his book Basketball on Paper (a lot of the content is available in some form on his old website). He has inspired a new generation of basketball fans to expand the way the game is covered and analyzed, in much the same way Bill James did for baseball.

These stats cover all the important aspects of a team: scoring, shooting, ball handling, rebounding, and getting to the free throw line. To keep things short I'm going to discuss them in terms of offense, but of course they apply to defense equally well (just compute them using opponent's stats).

What if measures: number of Possessions in a game

The core of tempo-free analysis is the refinement of a game into the number of possessions that occur in it. The possession is the basic unit of a basketball game in the same way that a plate appearance is the basic unit of a baseball game. By viewing a game this way, we will be able to separate the skill of teams in certain areas such as scoring from the speed with which they play the game: hence the name "tempo-free".

We define a possession in the same way as football - the period of time when the offense gets the ball until the opposing team gets it back. The advantage of defining possessions in this way is that it means both teams have the ball the same number of times in a game*. This isn't the only way to define possession and you will, for example, often hear a play-by-play guy or colour commentator refer to an offensive rebound as granting a team an "extra possession." In our definition though, grabbing an offensive rebound is more like getting a new set of downs - it extends a possession rather than granting a new one.

Possessions are not included in the box score, but calculating the number in a game is actually quite easy. The way we define them means that a possession ends in 1 of 3 ways:

The totals of these stats for both teams are averaged to estimate the number of possessions in a game. The formula is quite accurate as the only real uncertainty comes from free throws since these can be of variable number and might or might not accompany a field goal attempt. There are various choices of multipliers used to estimate how many possessions are ended by free throws, but they all tend to be around 0.475.

Possessions are primarily used in the calculation of other stats, but on their own they provide a useful way to describe how fast teams play.

*Obviously it's possible for one team to get the ball more times than an opponent if they both start and end a half with the ball, but the difference can never be more than 2 possessions in a game and over the course of a season it tends to even out.

What it measures: Points scored per 100 possessions 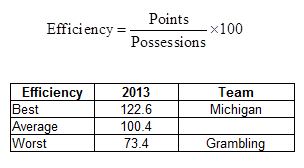 The goal (no pun intended) of basketball is to score points. We judge the quality of a team in large part based on their ability to score and to prevent their opponent from doing the same. The problem with traditional per game averages are that these numbers are heavily influenced by how quickly a team plays: ie how many possessions are in a game.

Since different teams play at different speeds they don't always have the same number of opportunities to score. This creates problems when using points per game to judge how well an offense is executed because a bad offense can still put up a high point total if they get enough possessions. Unless we know how many chances a team has to score, we really can't say if a high or low point total is good or bad - just think about how hard it would be to judge a shooter by how many baskets he makes without knowing how many he attempted.

A classic example of how pace of play can create a misleading impression of offense quality is to look at Wisconsin and VMI. Under Bo Ryan, Wisconsin is typically one of the 5 or 6 slowest teams in D1 basketball every year. VMI is the polar opposite under head coach Dugger Baucom, ranking as the fastest or second fastest team in America in 5 of the last 8 seasons (and in the Top 13 the other three).

Last year VMI scored 78.2 points per game, ranking 6th in the NCAA while Wisconsin scored 65.0 ppg, good for 240th. However, this does not mean the Keydets possessed a better offense. Their up-tempo style gave them lots of "at-bats" and their scoring average reflects this. Wisconsin's slow pace on the other hand did not provide them with the same number of opportunities as VMI, but last season the Badgers made better use of their chances. Wisconsin averaged 107.6 points per 100 possessions used last season, 64th best in the country. VMI on the other hand averaged 99.3 points per 100 possessions used, 189th in the country.

These stats cover all the important aspects of a team: scoring, shooting, ball handling, rebounding, and getting to the free throw line.

You will sometimes see efficiency given as Points per Possession (PPP). This mark expresses the same thing as offensive efficiency, just without scaling it by 100.

The next four statistics measure specific elements of basketball and are collectively known as the Four Factors.

What it measures: Shooting 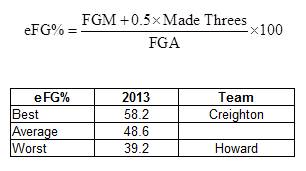 Consider two hypothetical teams. Team A shoots 50% FG% while Team B shoots 40%. If both squads attempt 10 shots who will score more points? The answer not only depends on the respective shooting accuracy, but also the choice in shots taken. If Team A only take twos while Team B take threes, then B wins 12-10 despite the lower accuracy. Regular field goal percentage treats two-point shots and three-point shots the same despite the fact that they are worth different amounts. A proficient three point shooting team will be more dangerous than their field goal percentage implies.

Effective field goal percentage overcomes this problem by giving the proper weight to three-point shots: essentially it makes a unit conversion to turn "made threes" into "equivalent made twos." So for example, 2 made threes in 6 shots are worth the same as 3 made twos and both outcomes results in a 50% eFG%.

What it measures: Fraction of possessions in which turnovers occur 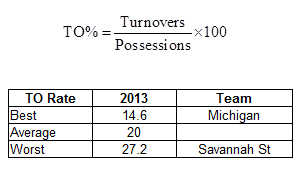 The philosophy here is the same as for offensive efficiency: per game numbers for turnovers are influenced as much by how often a team has the ball as they are by their ability to take care of it. Placing the number of turnovers in context of the number of potential chances to turn it over removes the problem of pace and gives a much more accurate measure of ball handling ability.

Last season Eastern Michigan averaged 13.9 turnovers per game. That's not a great number, but it doesn't exactly jump out as a huge weakness. Kentucky averaged 13.0 tpg themselves last year. But the difference in ball handling is much greater than just a turnover per game because EMU was one of the slowest teams in the country last year. Those 13.9 turnovers represented 23.1% of their total possessions: they were actually turning the ball over almost once every 4 times they had it. Kentucky on the other hand only turned the ball over 19.4% of the time: basically once every 5 times. Over the course of a game that difference adds up as it did when the two teams played a 74 possession game and UK won the turnover battle 15 to 19.

What it measures: Fraction of missed shots rebounded by the offense

The number of rebounds a team gets are affected by a number of factors that have nothing to do with the ability to rebound. To grab a rebound a shot has to be missed. Teams that commit a lot of turnovers won't get as many shot attempts, teams that play fast will have more chances to shoot (and miss), and good shooting teams won't miss very much. None of these factors have anything to do with the actual ability to grab a rebound, but they will affect the number rebounding opportunities a team gets which in turn will affect how many offensive rebounds they get.

What it measures: Ratio of free throw attempts to field goal attempts 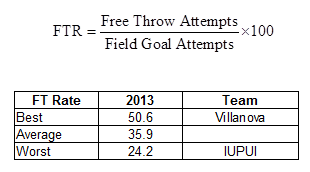 Free throw rate is the odd duck in this list. There's nothing intuitive or obvious about comparing free throw attempts to field goal attempts and there have been attempts to find other ways to put free throw shooting in better context. I think the best way to think about what free throw rate measures is how well teams give themselves extra chances or easier chances to score points. A high free throw rate indicates that a team is getting a lot of "and 1" opportunities (extra chances to score) as well as possessions in which free throws replace a field goal attempt as a chance to score in a given possession (easier chance to score points in most cases).

And those are the primary tempo-free stats. They aren't mysterious or arbitrary - they're based on real basketball things. The only difference between them and traditional per-game numbers is that these do a much better job of measuring achievement in the context of opportunity and make direct comparison of teams much easier.