Kentucky Football: The Disparity of our Rivals Ranking vs. our Average Star Ratings

As of Sunday night, Kentucky was replaced by Texas as #1 in the Rivals 2014 Football Recruiting Team Rankings. Even so, the BBN is euphoric and rightly so. This has never happened to Kentucky. Just how meaningful is that ranking compared to our average star rating?

Share All sharing options for: Kentucky Football: The Disparity of our Rivals Ranking vs. our Average Star Ratings

How long will it hold up? Who knows. I can guarantee that come Signing Day, the likelihood of being #1 or # 2 is remote.

Rivals puts a lot of emphasis on the number of commitments each school receives. Doing so has absolutely nothing to do with the quality of the recruits. They also give extra points to players who attend Rivals events. Rivals might also downgrade a player for off the field issues such as academics. I believe our own Denzel Ware was downgraded due to nothing that has anything to do with his quality as a football player. Rivals giveth and taketh away at their whim. So, there are built-in biases at Rivals which means one must take what they say with a grain of salt. The same can be said for all of the other services.

I like the Rivals player rating system and I use it in my Big Board just as I like the 247 Sports profiles. I don't use Scout or ESPN because of slow response to what's going on in football recruiting. For my purposes, both are pretty much useless. 247 Sports and Rivals keep on top of things while Scout and ESPN merely follow usually after the information is old enough to celebrate a birthday. The reason I say this is because the Rivals and 247 Sports update frequently, like almost every day. ESPN has so many unranked players compared to the other three services, they render themselves irrelevant except for the top players.

I spent most of yesterday taking a critical look at how much of a gap Kentucky has to close to compete for an SEC-East championship. As you will see below, there is a significant gap in talent between Kentucky and the rest of the SEC-E with the exceptions of Vanderbilt and Missouri. I started by plotting the average star ratings of each team in our eastern division. I haven't looked at the SEC-W because we have to win the East before worrying about the West. Here's what my first attempt looked like. You can click on it to make it larger. 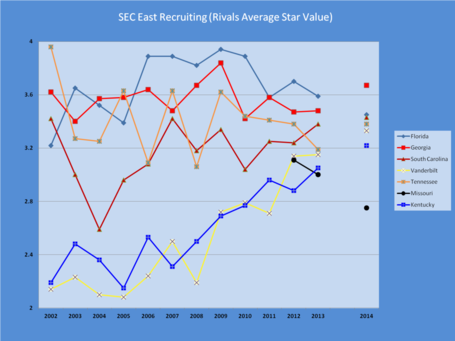 What this shows is Florida leading the way in the SEC East since 2006 while Kentucky and Vanderbilt have both improved, yet both have remained far behind Florida, Georgia, Tennessee and South Carolina. This graph also shows how much the NCAA sanctions from the Mumme era hurt Kentucky. It also shows how much coaching changes can effect recruiting. Florida under Will Muschamp isn't the same as Florida under Urban Meyer. This graph poses some questions. How big is the gap between Kentucky and Florida? You can see the gap in the next graph. 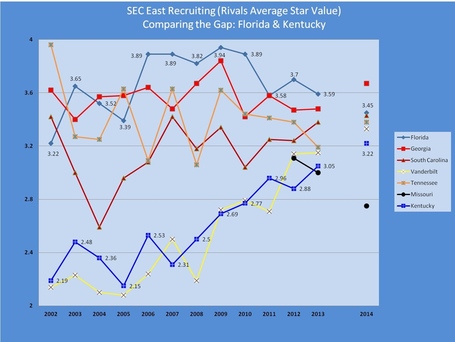 Since the 2014 recruiting cycle is entering it's 6th month, you have to take it with a grain of salt. Too much time and the fluidity doesn't encourage anything more than speculation. That is why the graph has a gap between 2013 and 2014. This graph shows that Kentucky and Vanderbilt have been closing the gap against the rest of the SEC East, however slowly. I decided to insert a trend line for Florida and Kentucky. 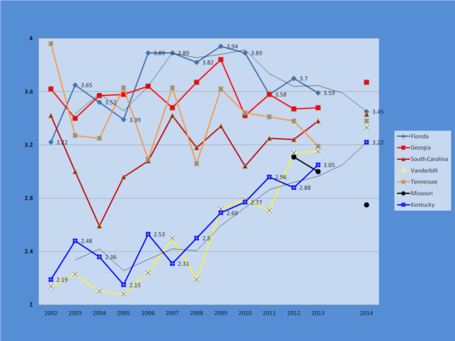 This graph shows the trending for the past, present and future (maybe). It also shows the disparity between Rivals average star ratings and their team rankings. While Florida's talent level is declining under Muschamp, Florida ranked #4 in the team ranking for 2013 with their 3.59 average star rating. #5 Michigan's average star rating was 3.63 and # 6 LSU's was 3.73. Southern California's average star rating was the highest at 4.42 and they were ranked #13 and Notre Dame's average was 3.92 and they were ranked #3 behind Alabama and Ohio State. See for yourself here. In my opinion, Rivals spends far too much attention to class size as opposed to the quality of the class. I won't comment about any correlation between rated quality versus performance on the field. That has more to do with coaching than recruiting. You can see the disparity by comparing the Rankings graph below with the one immediately above this paragraph. 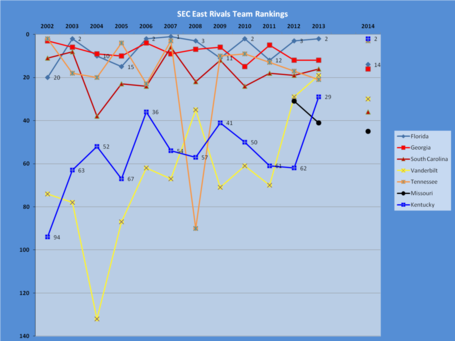 Some final thoughts. If you look at the head coaches for each school between 2002 and 2013, you can see in the graph why there are ups and downs:

Florida - Ron Zook was the coach in 2002 until he was replaced by Urban Meyer in 2005. He won two BCS titles. When Meyer left in 2010, Will Muschamp assumed the position.

Tennessee - Phil Fulmer's tenure lasted from 1993 until the beginning of the Lane Kiffin experiment in 2008. He lasted one year on the field and through two recruiting cycles before leaving the Vols high and dry. Derek Dooley was hired as his replacement and only lasted three years Butch Jones came on in time for the 2013 recruiting cycle.

Kentucky - We've been through four coaches since our Mumme probation. Guy Morris was the coach in 2001 and 2002, Rich Brooks came in and stayed from 2003-2009. Joker Phillips, the Head Coach in Waiting last three years and Mark Stoops took over in time to make a difference in the 2013 recruiting class.

Vanderbilt - Bobby Johnson was the head coach in 2002 and lasted until he retired in 2010. Tony Franklin took over in 2011 and has taken Vandy to new heights.

South Carolina - Granny Holtz was the coach in 2002. He was hired in 1999 and left in 2004. You can see how SC's recruiting plummeted until Steve Spurrier arrived in 2005. He's improved the Gamecocks recruiting and has also made them a contender. His biggest problem has been finding a quarterback who can meet his standards. He came close with Drew Barker, but close only counts in horseshoes.

Georgia - Mark Richt is the old man of the SEC-East. He's been there since 2001 and he's kept the Bulldogs near the top in recruiting.

Just so you understand the Rivals Team Rankings and player ratings. You can read their explanation at Rivals.

The question for you is how would you rank players and teams?