Skip to main content
News: The latest on Shaedon Sharpe

Kentucky Football: Why Joker Phillips Had To Go

I was working on a graph about Kentucky's post-spring game roster and something popped out that I wasn't aware of. Read about it and see if you don't see similarities to Steve Kragthorpe's time at Louisville.

Share All sharing options for: Kentucky Football: Why Joker Phillips Had To Go

Letting Joker go had to be tough for Mitch Barnhart, but in the end he knew it had to be done. They were friends and Joker was a Kentucky kid and a former UK player. But Barnhart was faced with declining attendance and declining season ticket sales. The fans had spoken and when it affected revenues, something had to be done. For Barnhart, the proverbial straw that broke the camel's back was the 48-0 loss to Vanderbilt...at Commonwealth Stadium.

This is a story that has repeated itself over and over at Kentucky. Hire a coach and hang onto to him until the fans quit going to the games and quit renewing their season tickets. If that hasn't been the cause for looking for new coaches in the last few decades, then NCAA sanctions caused a move in a new direction.

So why did Joker fail? I had thought it was partially due to a low recruiting budget that prevented the assistant coaches from making an effort to lure good talent to Kentucky. However, we learned this year that Mark Stoops has the same $500,000 budget that Joker had. " Eye opening" is a mild way of describing my reaction to that.

Also, the effects of our last period of sanctions had hurt tremendously. It took Rich Brooks several years to recover from that. Putting Joker Phillips in charge of recruiting helped along in the recovery. For Brooks, the turnaround began in 2006.

Brooks was hired after UK and Guy Morris could not come to terms and that was after Morris took the Cats to a 7-5 record in 2002. After going 4-8, 2-9 and 3-8 in his first three years, 2006 brought Brooks a glittering (by Kentucky standards) 8-5 record, ending with a 28-20 win against Clemson in the Music City Bowl. So, what brought the sudden turnaround? Coaching changes. In the SEC, you better have a quality coaching staff who can also recruit. If you don't have both, you're going to eventually find yourself in trouble.

After two years of having Ron Hudson as the offensive coordinator and quarterbacks coach, Brooks was forced to make a change. He promoted his wide receivers coach, Joker Phillips, to offensive coordinator. And, in 2005, he hired Florida State's offensive line Coach, Jimmy Heggins. Those were the two major reasons for the turnaround. In 2006, he hired Randy Sanders as his quarterbacks coach. Sanders has a reputation as a good position coach. Florida St. recently hired him as their QB coach.

Brooks retired at the end of the 2009 season after four straight winning season and four straight bowl games. It is well-known that he retired because of unfulfilled UK promises. He had had enough. Besides, Joker Phillips was waiting in the wings as "Head Coach in Waiting" which was popular at the time.

Joker took over 2010 and the transition was smooth, at least in public. Joker promoted Sanders to replace him as the offensive coordinator. In 2011, he made some major coaching changes, bringing in his friends and former mentors. He wanted a new emphasis on recruiting and he wanted to change the defensive scheme to a 3-4 and hired Rick Minter as his defensive coordinator.

What went wrong? Just about everything except recruiting and even that is subject to interpretation. You will see that Steve Kragthorpe had a better record at Louisville in his three years than Joker Phillips had. Look at this graph and you can see what happened and why Joker failed. What you see here is average Rivals.com star ratings of the classes during the tenures of the various coaches. Click or double-click on the graph to enlarge. 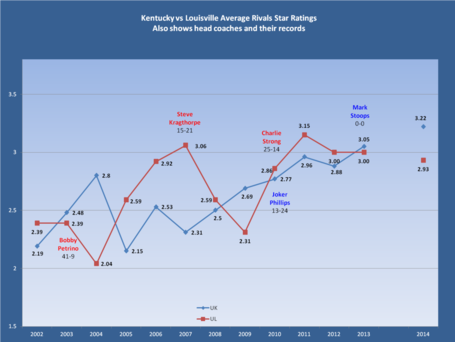 Here's my list of the five main reasons as to why Joker had to be let go:

1. Bad coaching hires - there can be a debate as to which was the worst hire, Randy Sanders as the OC or Rick Minter as the DC. Sanders had a track record as OC for Tennessee, where he was fired from the position by Phil Fulmer. In fact some believe Sander's offensive philosophy signaled the decline of Phil Fulmer. A coach is only as good as his assistants. Sander's playbook was too complicated and it took two or more years to learn. He also never had a replacement waiting in the wings.

Rick Minters' longest stint as a coach was at Ball St. from 1985-1991. If you look at his record, you can figure out he's just not a very good coach. See it here. If you're a head coach, you better hire the best assistants you can find.

2. Sticking with Morgan Newton as a QB. Enough said.

3. Recruiting began to falter after two straight losing seasons. When Stoops took over UK was ranked #62 by Rivals and Stoops changed the enough to land the #29 class in 2012.

4. Taking the Bill Curry approach to football his first two years. Slogans and standing stoically and appearing detached on the sidelines writing notes don't win football games. If you appear disinterested, it flows to the assistant coaches and eventually to the players.

5. Failure to keep the seats filled. This was the effect of the cause and effect of the four listed above. Once the pocket book is hit, the game is over.

Joker was hired to take UK to another level from where Rich Brook took us. No one expected the level to decline. Compare this:

Don't you think Fall camp should be tougher than Winter conditioning? Am I right?