News and commentary from around the Big Blue Internet. Kentucky rises to #1 in Rivals.com recruiting rankings. Season football tickets for sale, and a bargain. Gorgui Dieng makes controversial remark about Kentucky. More.

This is Rivals.com's ranking of 2014 recruiting classes as of this morning [Via Hank], and immortalized by screenshot for posterity: 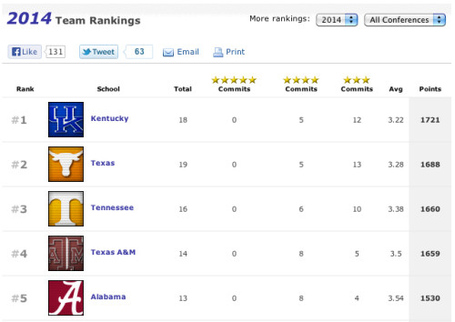 Don't get used to it, but do enjoy it. Even if we don't last out the day, you have to be impressed. Raise your hand if you thought you'd ever live to see UK ranked #1 in football recruiting this far along in a season.

My Internet Vision (newly improved by yesterday's eye surgery) counts only one hand. A2D2, you're a genius.