Friday, the news had it that Tyre Brady had committed to Kentucky, Now, there is some dispute about that. Let's look into the timeline and how the news broke.

Share All sharing options for: Kentucky Football: Look for the Yahtzee Label 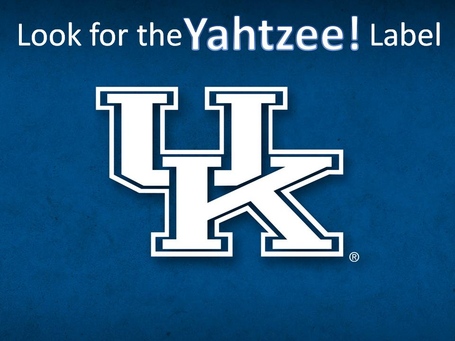 Sometimes there are miscommunications. It can happen even in this world of instant communication.

First, let me say that it was great to see Kentucky ranked #2 in the Rivals Team rankings yesterday. It didn't last long, though. It did, however, last long enough for KSR to post a screen shot. Cherish it because it may be the only time you'll ever see it. 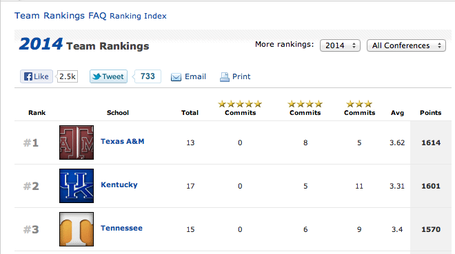 What caught my eye was the number of commitments shown. I thought we had 18, not 17. I clicked on Kentucky and found that Tyre Brady isn't on the list of commitments. Obviously, I wondered why and began to do some checking. Here's what I found in the timeline:

On Friday morning, it was reported at 9:52AM via Twitter by Justin Rowland that Tyre Brady was on campus for a visit. and was meeting with the coaches.

11:14AM Rowland reported that another WR, C.J. Worton was on campus for a visit. Apparently, UK had a mini-camp going on because others were tweeting that they were also on campus for a camp.

11:26AM, Landon Young's commitment was confirmed.

2:52PM, Rowland tweeted "Brady is a big pickup for UK, said he could commit on HOB (Cats Illustrated's House of Blue premium site)".

4:14PM, Rowland hints at a problem with the commitment.

7:20PM, Rowland announces Rivals will be keeping the commitments at 16 (at the time) because of issues he can't talk about.

KSR reported the Brady commitment at 6:01PM based on a tweet from C.J. Worton. Read about it here.

Kentucky.com reported the commitment in this article

The commitment was not reported by either the Courier-Journal or by Larry Vaught over in Danville.

Noticeably absent in this saga was a "YAHTZEE!" from the coaching staff. So, there is one lesson learned. Observation plus a couple of phone calls to Lexington last night also confirmed my belief that UK, except in rare instances, will not accept a commitment unless the recruit visits the UK campus and his academics has to be vetted.

Tyre Brady may very well be our next official commitment, but you will have to look for the YAHTZEE label.