Kentucky Football: Keeping up with the Competition - Part 2 of 2

There are two games every year that make or break our seasons. In the early part, we face Louisville and that game tends to set the tone for the season. The final game, however, has usually defined the seasons in the eyes of many UK fans. Losing to Tennessee has always been hard to stomach even if it didn’t prevent us from going to a minor bowl game during the Brooks era and Joker Phillips' first year.

Share All sharing options for: Kentucky Football: Keeping up with the Competition - Part 2 of 2

Last time, we looked at how Kentucky compares to the Louisville Cardinals in the head to head recruiting. There will be a revision coming because one of those who commented made a valid point. I've revised my methods for this article. Recruiting against the Tennessee Volunteers is a game at another level. The Vols have consistently recruited elite talent for as long as I can remember and they won a national championship with that kind of talent. Kentucky, on the other hand, has tried to win with far less talent and has managed only a few successful seasons.

More: Keeping Up With The Competition Part 1

Both schools, however, have been on a decline for the last six years on the field of play. We know what happened at UK, but what happened at Tennessee with regard to recruiting? Below are the Rivals Team Rankings in recruiting for UK, UL and UT for the years indicated.

Do you see a trend here? Just think, some fans wondered why UK couldn’t compete when even Captain Obvious can see why if he chooses to look.

When the Bad Fans pointed out that the disparity in recruiting was one of the reasons we were losing to Louisville and Tennessee, the Good Fans always responded by saying Stars don’t matter. UK could find under the radar talent, develop that talent, and win with that talent.

Well bless their little hearts (Georgia women use this catchy phrase when they’re telling you they doubt your intelligence).

While Kentucky was just barely competing with Louisville in recruiting, there was no competition with Tennessee and it was painfully translated to results on the field. The fact that UK beat the Vols in 2011 was more a result of a single game coaching decision which Tennessee had not prepared for, but it had nothing to do with equality of talent.

2008 was Phil Fulmer’s last season at Tennessee. This came on the heels of a terrible, for them, recruiting year and a 5-7 record. No Bowl game for Rocky Top. They dumped "Fat" Phil as he was affectionately known to SEC fans across the South.

2009 was Rich Brooks last season at Kentucky and Lane Kiffin’s first and only year at Tennessee. Hiring someone like Kiffin with the hot wife and the glitz and glamor that he brought along with him was heady stuff for Vol fans. You can imagine how hard it was for him, though, coming from the NFL Oakland Raiders to Knoxville - Culture shock. UT finished with a 7-6 record and a loss to Virginia Tech in the Chick-Fil-A (Peach) Bowl. When the stories of recruiting violations began to come to light, he bolted for Southern California, a bastion of propriety where he’s proven his greatness. (# 1 Baby!) Brooks finished out with a 7-6 record, losing to Clemson in the Music City Bowl.

At UK, Rise became Fail with a 5-7 season which included a 38-8 loss to Vanderbilt.

2010 was the year of the coaching changes. We saw the retirement of Rich Brooks and the crowning of the Head Coach in Waiting (HCIW), Joker Phillips at Kentucky, as well as the departure of Steve Kragthorpe and the hiring of Charlie Strong at Louisville. Meanwhile, in Vol country, the Lane Kiffin Experiment was replaced by Derek Dooley.

Dooley benefited from Kiffin’s recruiting blitz, Strong immediately improved Louisville’s recruiting with the hiring of Clint Hurtt who brought in the Miami kids, and Phillips and Randy Sanders "improved" (eyes are rolling) UK’s recruiting from 41st to 50th. So much for Operation Win. Meanwhile, Dooley "improved" Tennessee to a 6-7 record with a loss to North Carolina in the Music City Bowl. We all remember the Cats capping off a 6-7 season by losing to Pittsburgh, a team with no head coach, in the BBVA Compass Bowl. Operation Win went down the drain.

2011 showed UT fans that Dooley was still a pretty good recruiter, but he was a lousy coach, going 1-7 in the SEC and losing to Kentucky, who won with a receiver (Matt Roark) at quarterback and no passing game. Tennessee finished the year at 5-7. No more soup bowl games for you. Meanwhile, in Da Ville, Hurtt brought in Teddy Bridgewater and some some transfers and Louisville was off to the races. At UK, Rise became Fail with a 5-7 season which included a 38-8 loss to Vanderbilt.

Phillips and Dooley were shown the door in 2012, proving that only the Strong survive (pun intended). Dooley showed he could recruit, but couldn't coach, and Joker showed he couldn’t do much of either, at least at the head coach level. Meanwhile, UT suffered through another 1-7 SEC season with their only win coming against --you guessed it -- Kentucky, who was winless in the SEC.

In the preseason, Phillips thankfully trashed the "dumb" slogans, but posed this question at the SEC Media Days, "Why not Kentucky?" in reference to an SEC East title. That drew an immediate response from SEC football fans.

Over in Da Ville, Strong took the Cards to an 11-2 record with a victory over the Florida Gators in the All State Sugar Bowl. Kentucky was forced to fire Phillips as a direct result of the Bad Fan Rebellion and the 40-0 home loss to Vanderbilt. Tennessee, meanwhile, simply found another losing season unacceptable and canned Dooley. They didn't need a fan rebellion.

Tennessee had to suffer several turn-downs from high profile coaches like "Chucky" Gruden before hiring Butch Jones away from the Cincinnati Bearcats. UK actually had a guy apply for the job and actually presented a plan for a total makeover. Barnhart caught more than a feeling and hired the crazy guy who actually didn’t need to be convinced to come to Kentucky, the graveyard of college football coaches, better known as Punter U.

So, we arrived at the 2013 recruiting cycle. In around 70 days, Mark Stoops and his staff out-recruited both Louisville and Butch Jones. It doesn’t show up in the rankings against Tennessee because of Dooley’s recruiting efforts, but Stoops did, in fact, do a better job of recruiting after the two were hired as noted in an article by Mr. Hanky, the Christmas Poo, in this Fan Post. Now, we’re in a new recruiting cycle for 2014.

The playing field is level at the beginning of the 2014 recruiting cycle. The competition with Jones is a more difficult struggle because of Tennessee's long time tradition of being a big time football school. Despite the recent history of losing seasons, Tennessee is and always will be a force to be reckoned with.

In comparing the 49 players that UK and Tennessee have both offered, it becomes clear that both are going after some of the best of the best, something that Tennessee has always done and UK has rarely done. Advantage, therefore has to go to Tennessee.

Here's the pie. I dropped the percentages for reasons I'll explain. 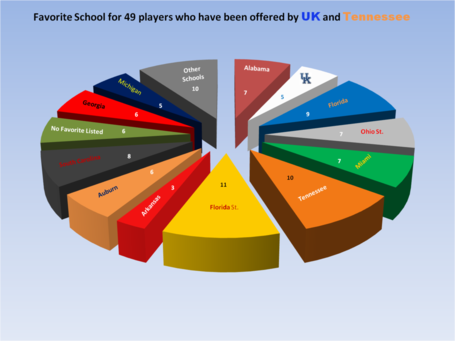 I changed my methodology because it was pointed out that 247 Sports lists those with the same rating alphabetically and not necessarily by order of preference. This time I once again counted only the schools the players listed a "Warm" or higher, but I added a twist to count each school with a "Warm." This can cause some confusion because the count is no longer 49 schools for 49 players. Some players have a rather large list that they feel "Warm" or higher about. So the result in the change in counting is a pretty large number of schools counted (100) for the 49 players.

Tennessee is also beating UK with commitments. they already have four. Only one of the four have UK offers, however. For a program who was last in the SEC, we are not doing too bad.