Kentucky Football: Are the Wildcats keeping up with the competition? - Part 1 of 2

After providing you with the list of offers, some of you may have wondered how we're doing against our two biggest rivals. I decided to take a look. There are forty-six players who have received offers from both Kentucky and Louisville.

Share All sharing options for: Kentucky Football: Are the Wildcats keeping up with the competition? - Part 1 of 2

Looking at Louisville and Kentucky

Losing to Louisville, for me, is about the worst thing that can happen during a football season. It is worse than losing to them in basketball because we know that is a rare occurrence with John Calipari as our coach. We also know, in our heart of hearts, that it won't happen two years in a row. But, Louisville has beaten us the last two years in football and Charlie Strong declared that Louisville will not lose again to Kentucky while he is the coach there. In my own self-exalted opinion, that's just plain old-fashioned horse hockey!

Time is now on our side because we are going to beat them, first, in recruiting and then on the field. Book it. It may not, but it could be this year. It will happen within the next three years. We've already beaten them with Mark Stoops' first recruiting class and Stoops & Company did it in 70 or so days while Cardinal Strong had a whole year of effort. So, what are we looking at in this recruiting cycle?

Obviously, both schools have offered more than forty-six players and both schools will most likely get somewhere close to 25 Letters of Intent next February. The Cards currently have two commitments while the Cats have one. That one UK has may be shaky now that more offers are coming in. Louisville has the edge right now, but how many more are they likely to get, and how many will Kentucky likely get, in head to head competition with the boastful, snarling Cardinals?

After coming off the big BCS bowl win over Florida, one would think that Louisville has a big recruiting advantage over the 2-10 Cats and a new coaching staff.

Not so fast my friends. One would be wrong. The following graph shows Kentucky is more than holding its own in head to head recruiting for 46 players. 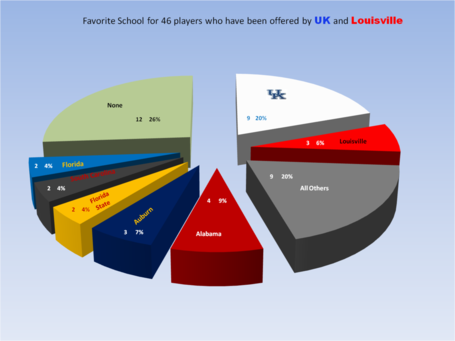 What the graph shows is how many (and the percentage) of the forty-six players UK, UL have offered in common, and who the players' favorites are.

247 Sports.com provides a list of offers for each recruit and they also give you the list of favorite schools in order. They will rate them according to the player's level of interest. The range goes from Hot, Warmer, Warm, Cool and no interest. Cool means that "I'm just not that into you." Heh. I've heard that from many good-looking girls over my lifetime.

What the graph shows is how many players recruited by UK and U of L who rank that particular school at the top of their list with a ranking of Warm to Hot. For the Warmer and Hot ranking, that player becomes a "Lean" if they don't list another school in the same category. The player may be on the verge of committing. A player who lists all schools who have offered as Cool is probably waiting on an offer from some other school, or he may just be non-committal at the moment.

The other thing the graph shows is who the competition is for the players UK and UL are recruiting. For a better understanding of what I'm saying click on each of the following five players:

Drew Barker: Kentucky shows up as his current favorite.

Matt Elam: Alabama is his current leader. Can anyone blame him?

Allen Artis: isn't all that interested in any of the schools that have offered.

In this particular look at these particular players who Kentucky and Louisville are fighting over, Kentucky is simply beating the Mr. Hankys off our red feathered little brothers and we are doing pretty dog gone good job against the mighty Crimson Tide as well.... at first glance.

Don't be having a case of Happy Feet here, unless you have a strong desire to be laughed at by the Alabama fans. Trouble is...Alabama isn't recruiting most of these forty-six. So, you can't count this as competition against Alabama, Florida, South Carolina, Florida State or the others, just Louisville. Still, it looks like Kentucky is recruiting better than ever before with this new coaching staff.

The graph also shows that there are nine other schools who are favored by at least one recruit out of the forty-six, and that those who are non-committal right now could swing the balance of power between Louisville and Kentucky. We are still in the first quarter, so the outcome could change in favor of the Cards. The end of the fourth quarter is the only time the score really counts.

Next up we'll see how we're doing against much stronger competition - Butch Jones and the Tennessee Volunteers.

Come writers and critics who prophesize with your pen And keep your eyes wide, the chance won't come again And don't speak too soon, for the wheel's still in spin And there's no tellin' who that it's namin' For the loser now will be later to win For the times they are a-changin' -- Bob Dylan