Kentucky Basketball, Rupp Arena and the Micro-economics of season tickets

What you are about to read is not unique to Kentucky. You can bet that North Carolina, Kansas, Louisville, Syracuse and other high end basketball programs have similar processes with seating. Some football programs such as Alabama probably have something similar as well. Seating is about supply and demand.

Share All sharing options for: Kentucky Basketball, Rupp Arena and the Micro-economics of season tickets

If you go to the UK Athletics web site, ticket prices for the current season are available. If you want lower level season tickets, the face value amounts to $900 per seat and $800 for upper level seating. This is a calculation based on this and a 20 home game schedule :

I'm not sure if the taxes for Rupp Arena bond fund to pay off the debt is included or not, but let's assume that it is. I'm also not sure if the KY sales tax is included. When Rupp first opened, the sales tax was included, but was later dropped by the KY legislature. It may or may not have been re-instituted since I left the Lexington area for the warmer climate of Florida.

As you may or may not know, there is a long waiting list for season tickets. So, they are hard to come by. If your name makes it to the top of the list, you don't just pay for the ticket package and go to the games and you can't buy season tickets for a single season. You have to make a "donation" to the University of Kentucky for the rights to the tickets on top of paying for the season tickets. That donation, depending on where the seats are can run over six figures. Before UK disbanded the UK Athletics Association (UKAA), the "donation" was made, originally, directly to the UKAA. Later on your "donation" was made to the Blue-White fund.

If you'll recall, the UKAA was a separate entity from the university. That money was used to support UK Athletics. Today, that money supports the university's general fund. The takeover was a money grab as you can see by reading the Athletics Department's Annual Report (See page 35 and read between the lines). At the time of the takeover, the UKAA had an endowment of $850 million.

Donations to the Blue White Fund are now limited to $110 per year and the Blue/White Fund has been renamed. It is now the 110% Fund. You should read the link and get your mind accustomed to the idea of making an annual donation as a season ticket holder. Also, read about the K Fund and this.

If you've read all of the above links, you will understand why the idea of surrounding the first few rows of the Rupp Arena floor with students, just  like Duke, will NEVER happen: not in a million years! The caldera at Yellowstone is more likely to blow first. This is one of those "Do you know what fat chance means?" moments. If the students want those seats, they're going to have to pay for them. Even with all the student loans available, I don't think even using that money would work. You can read this to find out why you should be envious of students.

There is a three level black market for tickets.  The lowest level can be seen by the scalpers outside of Rupp Arena for any game. The price you pay will depend on expected attendance for the particular game and who the opponent is. Prices can range from face value into the hundreds of dollars. You know that if you've ever been to Rupp. You also probably know you can get individual game tickets through some internet site. Prices vary. In the black market, things work by supply and demand. It is free-market capitalism at its best. UK has made attempts to control it, but has not been particularly successful.

The above is the "chump change" market. Some season ticket holders might be willing to sell their whole season ticket package for a single season if the price is right. That price will be based on the location of the seats AND the anticipated expectations for that particular season. Lower level prices can reach well into the thousands. UK has also made an attempt to curb this practice. That is the second level of the black market. Season tickets have also been used as barter.

The third level is another thing altogether. It involves crony capitalism. Only the very rich and powerful can obtain lower level season ticket rights in this manner. Not only do they have to be wealthy, but they have to be "connected" to the university through giving. It also involves plausible deniability by the seller, buyer and the university. This is the level where money talks and where big money can get things done. This practice may have ended, but it was an active practice when I held my season tickets.

As mentioned several times above, when you buy season tickets, you are also buying rights for future seasons. You will receive a notice before the season that it is time to renew your tickets for the upcoming season.  The rights give you first dibs on your seats. If you don't renew, there is that waiting list that is drawn upon.

I have no first-hand knowledge of the practice today, but ticket rights once could be passed on from generation to generation. That began when Kentucky played in Memorial Coliseum. By the time my mother passed her rights to me, UK had changed the policy to a once in a lifetime changing. When my father died, my mother inherited his rights.

Ticket rights are a valuable asset to hold. There have been many battles in divorce court over ticket rights and they have been the cause of many battles between siblings in estate settlements during the probate process. Some of these legal battles could last for years.

Who has seats at Rupp?

Any legitimate news organization can obtain this information through the Freedom of Information Act and perhaps through the Kentucky sunshine laws since the University of Kentucky is a public institution. When Rupp was first opened in 1976, there was a priority for the rich and wealthy individuals and corporations. The next priority was reserved for those who held season tickets at Memorial Coliseum. The third priority was those on the waiting list at the Coliseum and then the general public which mostly sit in the upper level.

If you held lower level seats at the Coliseum, you had the opportunity to get lower level at Rupp.  You can see the seating chart for Rupp here.

The value of a dollar and its historical decline

Excluding all the "required" donations today, lower level seats will set you back $1,800 bucks for two seats. The first game at Rupp was played on 11/27/1976 and was a 72-64 victory over Wisconsin. The official dedication was held after the 12/2/76 game against Texas Christian. Kentucky won 103-53. Kansas came to town for the official dedication 12/11/76. The Jayhawks played the part by losing 90-63. You can see the box score here.

Since the first game at Rupp Kentucky has won 501 502 and lost 62, including the Belmont Louisville game. That's a 89.007% winning margin. Not too bad for six head coaches (Hall, Sutton,Pitino, Smith, Gillespie and Calipari).

The final season at Memorial, a season ticket booklet cost $40 per seat, so two would cost you $80. See for yourself. Also, you can see the $4.00 cost for an individual game. 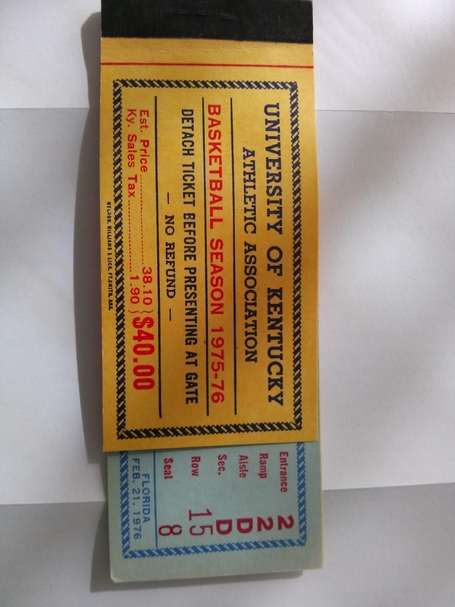 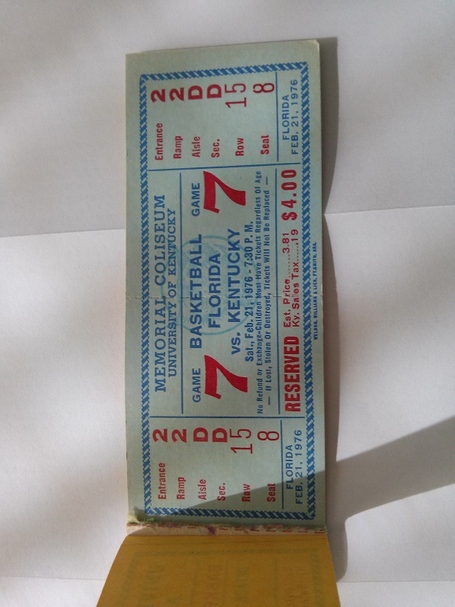