Kentucky avenged their NIT loss to Robert Morris on Sunday and produced their best defensive game of the young season thus far. Who cares about the team though - Cat fans everywhere are excited about the defensive play of Dominique Hawkins!

I hadn't originally planned on posting defensive results for this game.  Although I am going to try and chart the defensive plays for all the games this season, my plan is to only post individual game results for the big opponents (Michigan State, UNC, Louisville, etc) and then give periodic updates of aggregate results throughout the season (look for the first one of those sometime in the next week).  Then Dominique Hawkins got 18 minutes against Robert Morris and showed some great defense during his time on the floor, so I'll post some results for everyone who got significant minutes, but this DSS is dedicated to #25.

The 67.1 defensive efficiency is the best mark posted by the Cats so far.  It's a little deceiving though because Robert Morris missed a bunch of open shots.  I expect that to be a focal point for Cal in the weeks to come.

A good all-around game for Dominique.  He didn't grab any defensive rebounds which is a little disappointing given how many shots Robert Morris players missed - you would think one would bounce his way, purely by chance if nothing else. Here is his complete box score line:

Hawkins only gave up a single field goal - the three pointer at the end of the first half.  That shot was well contested however: 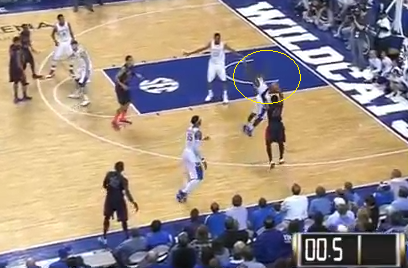 Hawkins defended this inbound play as well anyone possibly could - this is a case where you just tip your hat to Karvel Anderson for hitting a tough shot.

Okay: don't freak out about Hawkins' Defensive Rating.  This is mainly the result of some of the behind - the - scenes calculations that go into the defensive rating.  I'm going to go into a little more detail about that below for those who are curious about it, but basically his defense is just fine and this is the kind of thing that can happen in a single game.

All in all a great game for Hawkins.  I think his role is going to be similar to that of DeAndre Liggins on the 2010 team - a guy that Cal can bring off the bench when he needs a good defender.  It remains to be seen how effective Hawkins can be against the better teams, but his hustle and activity lead me to believe he is going to be good against the UNC's and Louisville's as much as the Robert Morris's of the world.


A digression into DRtg calculation

A primary component into the calculation of Defensive Rating is estimating the number of stops a player accounts for.  Stops are mostly gained in one of two ways: forcing turnovers and forcing missed shots while grabbing the resulting defensive rebound.  Turnovers are easy to deal with since pretty much by definition a turnover = a stop.  Missed shots require a bit more work though.

Just forcing a miss isn't enough - you also need someone on the team to grab the rebound.  Thus credit for the stop has to be split between the player who forces the miss and the player who grabs the rebound while stripping out the times when the other team grabs the offensive rebound.  How that credit gets split depends on the relative difficulty in accomplishing each task in the game: if the opposing team is shooting well then forcing a missed shot is somewhat more valuable than grabbing the rebound for example.

In the case of this game, Robert Morris did a pretty decent job on the offensive glass (31.6 OffRB%) but were terrible from the floor (23.2 FG%).  Because of this, defensive rebounds were a bit more valuable than missed shots and that affected Hawkins since he didn't grab any boards.  He helped force 3.5 misses (he split credit with Dakari on one of those) but a couple of those were rebounded by the offense and he had to split credit on the ones the weren't and the rebounder got more than he did.