The Kentucky Wildcats Lynx: The links that Adolph Rupp would completely ignore if he were alive today.

Share All sharing options for: Kentucky Wildcats Lynx: The News In Blue 11/11/2013

Well, that was exhausting. Five games in three days. I hope Mitch Barnhart has been taking his vitamins, otherwise weekends like this could run a man down.

I guess the easiest way to do this is to take it in reverse chronological order. Maybe do bullet points or something. Make it flow so everyone will be able to review the weekend in a smooth fashion. Or not.

Last night's UK-NKU game was pretty sweet. Especially if your name is Randle. There is an aura about that young man. No cockiness, no DeMarcus Cousins overabundant enthusiasm to work out of him. He just shows up, kicks your tail, and goes home. He doesn't talk about it, he doesn't do anything outwardly to let you know he owns you. He doesn't have to. NKU Head Coach Dave Bezold had this to say:

On the play of Julius Randle …

"When I walked out on the floor and saw how big they were, I thought about turning around and going back in the locker room for a little bit. They are monsters. He is just physically so gifted and a special player. He is like all young kids, if he works really, really hard he is going to be special at this level and the next one, too. He is one guy that we really couldn’t physically matchup with right now."

Just listen to him discuss the upcoming game with Michigan State. That's a confidant, yet realistic young man right there. A freshman. A leader. We are more than fortunate to have this young man at Kentucky. If not for some arcane rules made up by men trying to protect their jobs, he would never have needed to don the blue and white. He's made the appropriate impression on CBSSports.com and their Top 25and1. Even John Clay has a few good things to say. For a look ahead, have a look-see at what Seth Greenberg has to say about UK-Mich. St. You can throw in a few comments about next year's recruiting class as well from ESPN. To be honest, I could list 50 more links on the game and the team for today. No way I am going to try that!!

I am not going to spend a lot of time reliving Saturday's painful and revealing Kentucky Football bout with Mizzou. There is no shame in losing to Mizzou, but Coach Stoops has a lot of work to do in this off-season and the off-seasons to come. No quick and easy fixes for UK Football, that is for sure. But we have the man who knows how to fix it. He gets the tools, and the fixing will begin. Not sure? See what former UK greats have to say.

Speaking of which, Stoops has his first 2015 commit in the person of Montrell Custis. He is a 4 star player from Georgia. That's right, Kentucky's first commit is a 4-star. I cannot stress enough how important this moment is for UK Football. a 4-star rated player is committing early to UK Football. Let that sink in. It all starts with the small victories. Montrell picked the Cats over offers from Auburn, Tennessee, Georgia, and Clemson.

Today is Veterans Day, which I am sure most of you are well aware of. I wanted to give everyone a chance to do something different today. A different kind of a link. Something that would serve to give ourselves a reminder of why we get to enjoy this site and all the benefits that go along with it. I am a veteran, Glenn is a veteran. I know that some of you are veterans. So, the rest of today's link posts are going to be waived so that all of you can post. Your favorite veteran, UK fan or not. Post a pic, post a link, write a short memorial or tribute, anything you like. Since I get to do this post, I am adding a photo to which I hold 100% absolute rights to. My favorite Veteran, and an 87 year Kentucky fan. William C. Henry, better known to all of you as Kats-Pa. 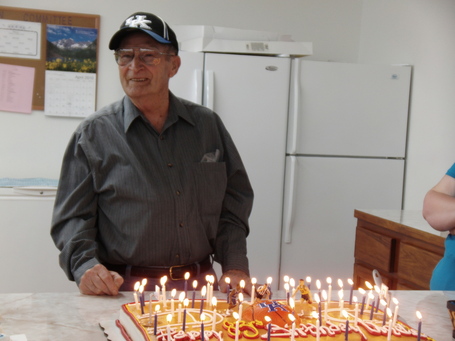 There's mine. Below is his favorite quote on military service. He spent 18 months serving in Southeast Asian waters in WWII on a mine sweeper. Show me yours.

"I can imagine no more rewarding a career. And any man who may be asked in this century what he did to make his life worthwhile, I think can respond with a good deal of pride and satisfaction: 'I served in the United States Navy." ― John F. Kennedy