It seems to me that the football team, despite a similar record to the 2012 squad at this point in the season, has performed better in their toughest games despite still ending up with an L in all of them.

I wanted to do something simple that could visually depict how UK has done relative to opponents' strength and came up with the graphs below.  In them I've plotted the season averages for points scored and points allowed for UK and the SEC schools they've played in 2012 and 2013 so far.  The actual game results are also plotted and connected to the schools by lines.  This will allow you to get a sense of how the actual game outcome relates to the overall strength of the teams involved.

Constructing the graphs in this way makes them fairly easy to interpret based on how game results are oriented relative to per game averages.  I've made all the axes the same length to make easier comparisons between graphs. (axes are now different in the new graphs)

Note: clicking on the graphs will pull up a bigger image

Update: I've remade the graphs so hopefully they aren't quite as confusing and cluttered as they were before.

I've divided up the 2012 games into two groups to keep the graphs a bit less cluttered. 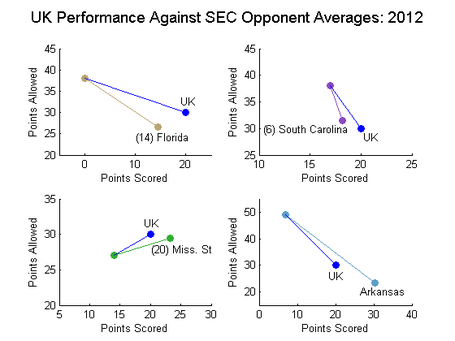 By contrast, against South Carolina UK performed worse than average in both points scored and allowed whereas SC scored more points than average while giving up essentially their season average in points to the Cats. 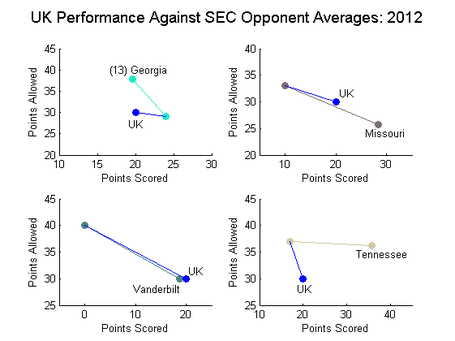 The game against Georgia represents the Cats' best effort last season.  That game lies in the southeast region for both schools indicating that UK's offense and defense both played well.  That day they scored more points than average but also more points than Georgia had been giving up while holding the Dogs to a lot fewer points than they were used to. 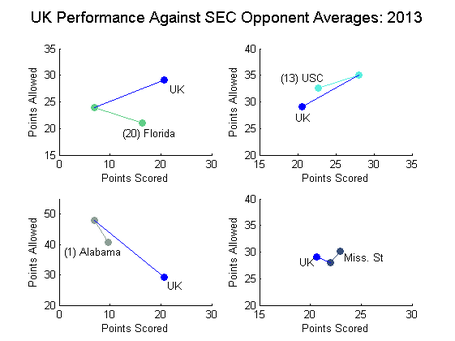 Kentucky might be 0-4 in the SEC again this year, but the games themselves are more competitive.  In 2012 there were 6 games where opponents outperformed their own season averages both on offense and defense (ie games in that "northwest corner" relative to UK/opponent averages ).  Some of those games (Tennessee and South Carolina) were only slight improvements in one area, but there were still 4 games where opponents did better than average by A LOT.

This year we've only had 2 such games: Alabama and Florida.  Alabama is Alabama though and while Florida scored more points than they have on average this year, the mark was also an improvement on the defensive side for UK - there were none of those kinds of games last year.