Kentucky Football is 1-2. They just lost to a Sun Belt team and they are starting conference play this week on the road against Florida. The fanbase isn't happy and the coach is under fire. The team is doomed to a 2-win season and getting stomped by every SEC team in sight. There is no hope, no joy, no reason to be even the least bit optimistic about what the remainder of the season holds. It's time to move on to basketball.

Maybe. But maybe not. Let's imagine an alternate reality in which a young, enterprising Wildcat defender decided to stay in position when the Hilltoppers attempted their trick play on the 2pt conversion instead of joining the rest of the team in chasing after the ball like a teeball squad going after a ball hit to right field. Because of that, he was able to tackle Antonio Andrews preventing the conversion and giving the Cats a 1 point win and a 2-1 record.

Now here's the key question: under this scenario would you feel better about the team's prospects for the rest of the season than you do right now? I would argue that you should feel largely the same. When it comes to thinking about upcoming games, it's less important that the Cats won or lost a 1 point game to WKU than it is they were in a 1 point game to begin with. Beyond that, it's just as important to look at ALL the games played so far and avoid fixating on the last play of the most recent one.

In particular, I was curious how Kentucky's historical performance in their early non-conference games correlated to their conference performance. It makes sense that if the team was better early in the season then they should be better in conference, but how strong is the relationship?

I looked back at the last 12 seasons and divided games into two groups: conference games and non-conferences games that were played before UK's first SEC game (aka pre-conference games).

The Cats are in the middle of the pack in each category and are better than 2004 when they went 2-9. What does that pre-conference perfomance indicate for conference play? 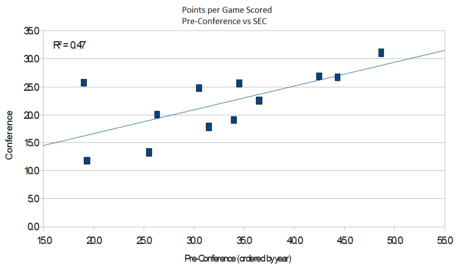 [Update (9-19): Contrary to the x-axis labels, the scores are not ordered by year, that's a remnant of a previous organization attempt that was changed but I forgot to change the labels.] 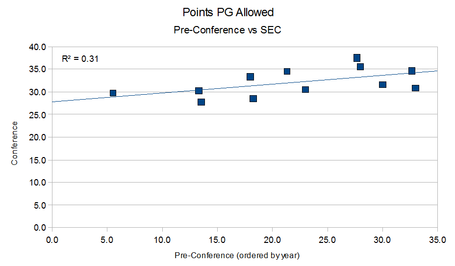 The relationships are not strong (check the R-square values), but they are suggestive. The better the Cats are able to score points against their pre-conference opponents, the better they score against the SEC slate. The same holds true for the defense.

I'm not suggesting that the Cats are going to storm through the SEC. Even in their best years they could only manage 2 or 3 wins in conference. I know the results have been pretty terrible this year, but I actually think there is legitimate reason to believe they can still win 2 or 3 more games (counting Samford). They are not as bad as their current 1-2 record and loss to WKU makes them look. This is still a legitimate offense and that will give them a chance in a few games the remainder of the year. The defense is young and young players get better. If Joker can keep the team together and playing hard, I believe that better results will follow.