Share All sharing options for: Kentucky Wildcats Football Gameday Traditions at A Sea of Blue and Beyond

Gameday traditions. Everyone is supposed to have those, but as a less-than-superstitious guy who rarely gets to attend games in person, I have very few things that could reliably be called traditions.

Kentucky fans in general, especially those who go to games frequently do have traditions, and the Wildcats themselves have one major game day tradition known as the Cat Walk, which is a path between Nutter Field House, where the team bus arrives, and Commonwealth Stadium, a distance of approximately 200 yards total. Fans line up along the Cat Walk route, and the team walks to the stadium from the bus among the cheers and accolades of the fans.

Another "tradition" at Kentucky, although by no means for everyone, is what I like to call the "daily double"; a day at Keenland Race Track to bet the ponies in the afternoon, and a night of Kentucky football. Opportunities for the daily double this year will be scarce (when we finally get game times), only potentially available Oct. 6th vs. Mississippi St. and October 20th vs. Georgia. All other dates during the fall meet at Keenland are road dates. Hopefully at least one of those two will be late afternoon or night games.

There are numerous other traditions at tailgates that are too diverse to detail, but they include corn-hole, barbecues of every possible description, and adult beverages of equal or greater variation. Kentucky tailgates are pretty much the same thing as every other school in the South, although I have not seen any pictures of topless women with body paint, as you occasionally see at Alabama or LSU.

But A Sea of Blue has some traditions as well, and we'll explore these after the jump.

A Sea of Blue traditions

The first tradition here is a new one, and it is the Virtual Tailgate. The VT is a morning post I do looking at the team we play, and discussing the cuisine and beverages favored by the the state, city or region from which our opponent hails, with pictures that often leave readers hungry for more. Mixed in with this is a discussion of the game itself, mostly light-hearted.

Another tradition, of greater duration, is the pre-game, where A Sea of Blue writers look at that week's opponent in depth.

Third is the Open Game Thread, which we do for every game during the year. It is a live thread where members can discuss the game, comment on plays as they happen, and commiserate or celebrate in real time, as appropriate.

Finally, we have the postmortem, usually within three hours after the game, and often within an hour immediately after. This is where A Sea of Blue writers discuss what they think went right, and what went wrong, and what can be learned from the game. Members discuss it further in the comments, adding insight and helping each other draw conclusions, if they can.

Generally speaking, I have few. For the most part, it amounts to my wife and I donning Kentucky logo apparel and cheering on the team.

After the game, I will, along with a fair number of A Sea of Blue members, have a small glass of bourbon (this is Kentucky, after all, the only place where you can make bourbon), typically Four Roses Single Barrel in my case. Many denizens of A Sea of Blue have their own favorites, of course, so FRSB is by no means the only brand consumed, and I will occasionally veer off that path to something different. 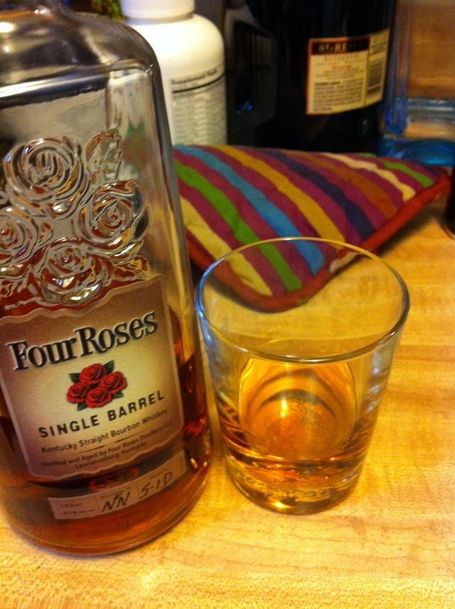 Of course, I'd love to know more about your game day traditions. Tell us in the comments.