A Sea of Blue At the Final Four: Diary -- Leaving the Big Easy

Share All sharing options for: A Sea of Blue At the Final Four: Diary -- Leaving the Big Easy

Hello again from New Orleans. It's time to come home, and with a few minutes before our flight boards, I thought I would begin to close the experiences of this trip. It was nothing if not eventful.

Our final full day in NOLA began late, because we didn't get in from Sammy Hagar until 1:30 AM, very tardy for yours truly, who tends to turn into a pumpkin at midnight. Thus, we laid in until 9:30 or 10 on Monday, which was when I wrote my last update. We'll get to the game, but before that, I'll touch on some of the other stuff we did.

After we left the hotel, we went down to Bourbon Street for some lunch. We wound up at a place called, LeBayou, and there I enjoyed the best oyster dish ever laid before me -- Oysters Ya-Ya. This dish was somewhat similar to Oysters Rockefeller, but instead of spinach, they use a much lighter Cajun pesto consisting of garlic, basil and white wine, along with a sprinkle of parmesan reggiano. The oysters are then placed in the salamander until they are warmed through and the cheese is melted, then served hot by the half-dozen. Fantastic dish, I had 18 -- Couldn't help myself. Petra had the fried shrimp, which were also superb.

After lunch, we met Big Sky Cat down at the Bourbon House, which is where we ate our first meal in NOLA back on Thursday. She had scoped out where the guys from Maker's Mark were offering a very special deal that included a small basketball dipped live in their famous red wax. All you had to do to get that was order a Maker's Mark drink at the bar. 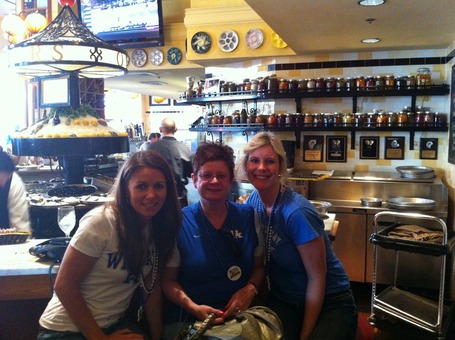 From left to right, that's Andrea, my wife, Petra, and Big Sky Cat

As Dickie V. would say, "Are you kidding me, baby?"

So three Maker's and waters later, I had my fill of bourbon, everyone had their wax-dipped basketballs, and we trundled out a little crookeder than we entered. I had to go back to the hotel to prepare the pregame and open thread, while Petra went off shopping.

When I got done, it began to rain. And it rained, and rained, and rained. We had planned to go to a game pre-party at Manning's (Archie Manning's place), but the rain made that pretty much impossible. Ultimately, we were forced to walk in the light rain most of the way to the arena for the game. Petra scored a couple of ponchos so we were not too soaked, but we also wound up bumping into a pedicab driver needing a fare about half way to the dome. He took us the rest of the way to the Superdome in relative comfort. Now I know what it's like to get around in China.

The 2012 NCAA Tournament finals were everything we could have imagined, or hoped that they would be. The game itself was interesting in that the Kentucky so dominated the first half that most of the people around us were ready to concede the championship. I, however, was not so sanguine. 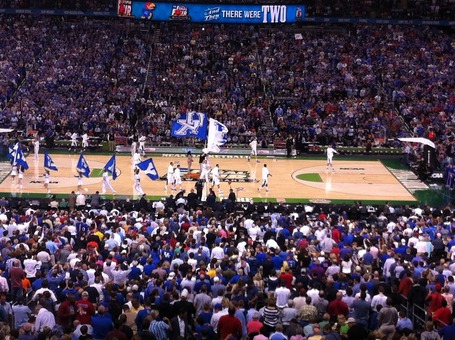 Getting ready for the finals!

Sure enough, the second half saw the Kansas Jayhawks make a furious comeback. Kentucky kept fighting them off, but very much like the Louisville Cardinals game, the Jayhawks were determined to make a game of it, and they did. As time wore on and the game got closer, Kansas fans got more and more excited, and Kentucky fans started to sweat. And it got closer. And we sweated more. 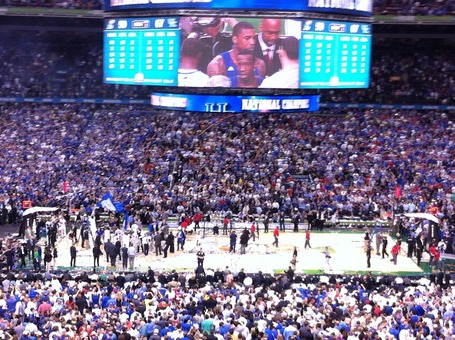 The aftermath of a championship

And then it was over, and Kentucky had claimed championship #8. The confetti fell, the non-UK fans mostly departed, and we all stayed around to sing "My Old Kentucky Home," watched the "One Shining Moment" video, the Wildcats cut down the nets, and completely immersed ourselves in the joy of what had seemed so incredibly distant only four years ago. I'll have more analysis on the game later after I have time to watch it again and compare that with my memory of the live event, but we'll leave it there for now.

After the game and celebration were over, we trudged back through the rain to the hotel about a mile and a half, and despite our ponchos, we got pretty wet, because the rain just started to fall harder and harder. By the time we got back, it was almost 1:00 AM, and we stayed up long enough to watch the team press conference on the Worldwide Leader. Since we had to get up at 6:00 AM this morning to catch our flight, and had walked about 15 miles that day, we gave up very quickly on the idea of celebrating and went to bed. But rest assured, I have set aside some time this weekend to celebrate this victory correctly.

Now, I am back in Jeffersontown. This trip has been an eventful one, and we got to see a lot of celebrities, for those who care about such things. Clark Kellog, Mark Fox (Georgia Bulldogs coach), Dennis Felton (former Western Kentucky Hilltoppers and Georgia coach), the ubiquitous Dick Vitale, Charles Barkley, Steve Smith, and several members of the Louisville basketball team.

Once again, I'd like to thank our sponsors, Buick, for this unique and outstanding opportunity. Nick Richards and his team took fantastic care of us and the entire event went as smoothly as it possibly could have, and as a bonus, they let us drive one of these. I lack the words to properly express my gratitude to the fine people at Buick for this unforgettable moment, so I'll have to settle for "Thank you so very much."