Share All sharing options for: A Sea of Blue At the Final Four: Diary -- Day 2 and 3

Sorry about the lack of blogging, but as you might expect, so much is going on that I have hardly had time to sit down and do anything on the computer. Today has been a bit of a recovery day after the excitement of last night, and while my dear wife is down the street gambling away our hard-earned money at Harrah's, I have a bit of time to write a post and catch up on things.

Friday, we went over to the Superdome to watch the Wildcats practice. Most of you, if you have visited the A Sea of Blue Facebook page, have seen most of the pictures there. If you have not seen them, head on over and check them out. We watched Louisville, Ohio St., and Kentucky practice. We did not stay around for the Kansas Jayhawks.

Now, to Friday night. Our sponsor, Buick, really set us up for an awesome time here in the Big Easy, and we all got treated to dinner at the The Court of Two Sisters, a restaurant on Royal Street, which is just behind the hotel. We came in and were treated to nice cocktails (I had a Blanton's neat, and boy, were they generous with that pour). We had a large table for about 20 in the back of the restaurant, and we feasted on barbecue shrimp, alligator sausage, and some other shrimp dish in sauce that I can't recall the name of. It was all lovely, and the alligator in particular.

I had Veal Oscar for the entree, and I would recommend it. The veal was cooked in an unusual way, almost seared, and it was really tasty. The dish was served with crab meat and potatoes, and if I had a criticism, it would be that because the dish was served in a stack, the crab meat and potatoes kind of blended together. The plate could have used a bit more citrus to brighten it up, and the lack of contrasting textures between the crab and potatoes was less than ideal. But it was still very good.

For desert, creame brulee was my choice, although as is sometimes characteristic of restaurants lately, the custard was caramelized well before hand. I really prefer that dish freshly caramelized and just a touch warm on top, it just seems a nicer contrast with the custard below than if it was caramelized earlier and then refrigerated. Ah, well, picky, picky.

After the dinner, which went on for a good two hours (service was very slow and deliberate, which can be good, but in this case it was a bit too slow), we adjourned for the House of Blues where Kid Rock was putting on a live concert for a select group, including us. I saw Dick Vitale there as well as a couple of other media types, but didn't speak to them. 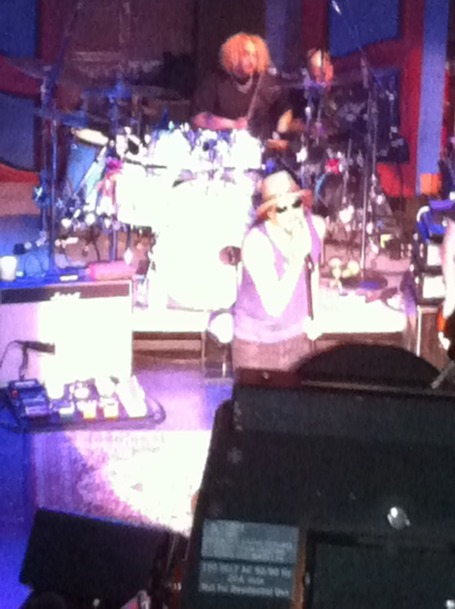 Saturday, Petra and I hung around the hotel while I did some blogging, then left about 2:00 PM for lunch. We went over to Bourbon Street and Remoulade, which is the casual section of Arnaude's restaurant. Our service there was very poor, but when we finally did get fed, the food was awesome. I had the jambalaya, and I must say, it was absolutely the best I have ever had in my life, and not even close. Aside from the unacceptably slow service, it was a winner.

After that, the ball game. We all know what happened there, and we were treated to a hospitality suite which served free alcohol and finger food. The thing is, during the game, they had to stop serving (NCAA rules), and they started back up at halftime and between the games.

Today, Petra decided that she wanted to head to the casino for a bit of gambling. I went with her, and while we were there, we got into contact with BigSkyCat, and we had our first A Sea of Blue conclave right in the middle of Harrah's New Orleans. It was great, and hopefully we'll all get together again for some drinks before we bid farewell to the Big Easy: 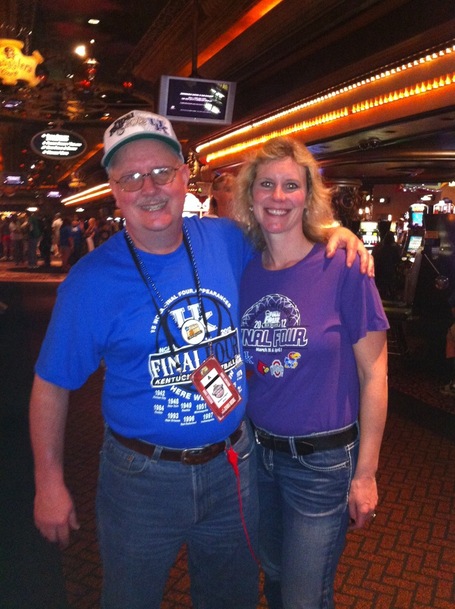 Finally, I headed over to Bracket Town, the NCAA's fan experience. There was a lot of stuff over there, mainly involving shooting the basketball into goals of various heights, sizes and conditions, all accompanied by every corporate entity you can name. It was great for the kiddies, but I found it wanting in interesting things to do that did not involve standing in long lines. 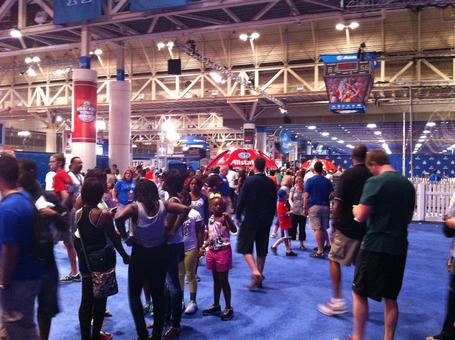 So there you are, a bit of a poor-man's virtual tour of my last few days of the 2012 Final Four. I am currently sitting downstairs in the bar area enjoying cold Budweisers while I write this. I saw the omnipresent Matt Jones just about half an hour ago and said "Hi," he is staying in the Mariott as well, presumably on assignment with CN2, or whatever. I really have no idea.

Anyway, that's about all for now. Probably way more than enough, I'd imagine. We now return you to your regularly scheduled blogging about the Kentucky Wildcats.

Also check out the exclusive Buick-NCAA Team Badge application found on http://apps.facebook.com/ncaabadges/ which allows college basketball fans to post a college-specific March Madness badge on their profile to show support for their team.