Earlier today I posted an update of how the Cats are performing on offense and now it's time to look at the defense. Sadly, it appears that ESPN has decided that no one should ever be able to watch Tuesday night's beat down of Tennessee ever again as the game is not available on ESPN3 nor at the SEC Website. The individual defensive numbers don't include the results of that game, but they do have everything up through LSU.

Previous posts in the series:

Here is how UK has performed defensively in conference play measured against how their opponents have played on offense in conference (includes Tuesday's Tennessee game): 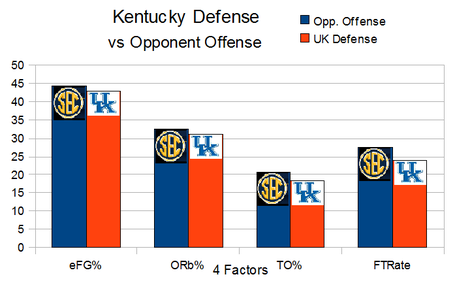 Not surprisingly, the gap between what UK allows and what opponents average has closed in conference play. In a vacuum, Kentucky's numbers are very good, but they have faced a number of very bad offensive teams in their first 8 conference games. I don't want to overstate this - UK is still a top defensive team - but there's no getting around the fact that they haven't faced a truly good offense yet in SEC play. According the Ken Pomeroy, the Adjusted Offenses of UK's opponents range from 75th (Alabama) to 270th (Auburn).

One area where the Cats have really struggled is in forcing turnovers - they are actually forcing fewer giveaways than their opponents typically commit. Coach Calipari's defenses have never been big on forcing turnovers - last year they only had an 18.9 TO% in conference and in 2010 that mark was 19.4% and both were well below the D1 average.

What's odd is that UK is actually doing a better job at getting steals than they were early in the season. Through their first 15 games UK got a steal on 9.8% of their defensive possessions, or just a bit less than 1 out of every 10. In conference play that mark has increased to 10.5%. That might not seem like much, but it is a pretty solid increase. So UK's opponents are committing fewer non-steal turnovers. I don't think it's a lack of activeness on defense - while I don't have numbers, the Cats are still getting quite a few deflections in games so I think the defensive pressure is there, they just haven't had any luck in getting traveling calls, charges, or errant passes tossed out of bounds. It's something that bears watching in the future.

Here are the individual numbers. Click on the first link above to get an explanation of the categories. There is a new one at the end: Opponent Efficiency (Opp Eff). This is just the points allowed by the player divided by the number of defensive possessions they've engaged the ball handler and scaled by 100. It's very similar to Defensive Rating, but while Def Rtg includes a team defense component, Opp Efficiency is entirely an individual metric.

Through 22 games UK has a Defensive Efficiency of 86.6 points per 100 possessions (does not include the Tennessee game).

Conference play has been rough on Darius. The lack of rebounds and decrease in forced turnovers limits the number of stops he can personally account for and opposing players are hitting shots at an increased rate. I think some of this is just bad luck as Miller has been in good defensive position on a lot of the makes, but I'm also concerned about his declining block rate. This is something that hasn't drawn much attention, but Miller has gone from being really good at blocking shots his first 3 years to being, well, the exact opposite this year. I don't know why that should be, but this is one area where I would like to see a return to the freshman form.

Jones is very tough on shots, even holding down opponents at the free throw line! He has always been a good defender and even when he was working his way through his finger injury he continued to play good D. That's continued in conference play.

The big difference for Lamb is the perimeter and the free throw line - Lamb is basically turning opposing players into himself. Seriously, compare his own free throw rate and shooting numbers from the link above to what he is allowing on defense. It's eerie how similar they are. Given that Lamb is a pretty good offensive player this is not a good thing.

Despite limited playing time Vargas continues to be a defensive stalwart. His ability to give the Cats good minutes off the bench could be a critical factor at some point during the tournament. Vargas deserves a good deal of praise for his defense and the flexibility he gives the team.

Teague is getting better and better on defense. His defensive rating is increasing, but I think that is mostly linked to the team's own increasing defensive efficiency. His Opponent Efficiency is steadily moving downward and in large chunks too. He is getting better at fighting through screens and not losing his man in traffic (although the latter still happens occasionally) which means he gives up fewer open looks at the perimeter as reflected in his Defensive 3PT%.

In the offensive update I called Doron Lamb "Mr. Consistency" but I should probably switch that to MKG - on both offense and defense he is simply a marvel. I have noticed that he is not laying off perimeter players as much as he was in the beginning of the season, I think that is one reason his defensive 3PT% has dropped. I'm surprised he isn't forcing more turnovers - he is so active that it seems like it would lead to more.

Anthony Davis' minutes are increasing but he still maintains excellent defensive numbers. His defensive rebounding has fallen off some in conference play, but that's about the only thing he's doing worse, and that's relative. He is still very good, but he has the ability to be better on the glass and doing so would help the team a lot.

I think Wiltjer is getting better on defense, but there is still a ways to go for him. He is holding opponents to a very good eFG%, but his rebounding needs to improve. That, combined with the lack of turnovers are what is keeping his Opponent's Efficiency down, errr, up. The lack of turnovers aren't really a concern - he's a big man after all - but he's capable of doing better on the glass, and needs to do so when he is in the game for Jones or Davis.