Are there really just 8 games left in the regular season? It seems like only yesterday that Terrence Jones was putting on a show at the Blue-White Scrimmage and everyone was bombing away from distance during Big Blue Madness*. We are halfway through SEC play and it is time check in on how the offense and defense are doing. I'll have a post on defense up later today.

Previous posts in the series:

*Speaking of which, where did all that 3pt accuracy go? They couldn't miss during the first practice of the season and now only Miller and Lamb can reliably hit from outside. Maybe they need to dim the lights more at Rupp during games.

Now that we are in SEC play, let's look at how the UK offense has performed in conference games versus what their conference opponents' defenses have done. 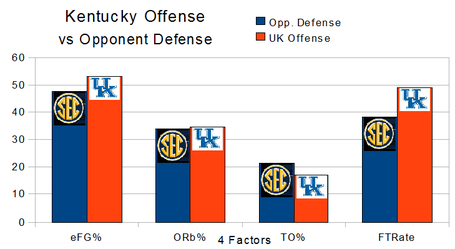 The big question mark is offensive rebounding where the Cats have been completely average. If you didn't already, click the link above and look at how much better UK was at rebounding their own misses compared to what their non-conference opponents allowed on average. Now certainly the competition is better overall in the SEC, but is it better enough to bring the Cats down from "Very Good" to "Completely Average"? The SEC schedule so far has not exactly been a Murderer's Row.

I can't pinpoint any one reason for the drop. If you look at the players below several have small drops in their personal Offensive Rebound %, but it's mostly concentrated in the guard/small forward positions: Anthony Davis is still where he's been most of the season and Terrence Jones has improved over the last 8 games. Fortunately, offensive rebounds are one area you can consider to be "optional" based on coaching philosophy - some coaches want their teams to get back on defense instead of crashing the boards. But Calipari has never been one of those guys and I certainly haven't seen any evidence of a change in strategy, so I can only conclude that UK is just not getting it done. What have you seen?

Going into the Tennessee game, Darius was back to shooting an even 40.0% on his 3pt attempts, a few misses dropped it down to 38.1% but it is safe to say that whatever issues (if there were any) that affected his accuracy early in the season are gone - we're seeing the Darius Miller of last season and that's a welcome sight as Doron Lamb is the only other trustworthy 3pt shooter on the team.

Terrence Jones is steadily regaining his pre-injury form. He is rebounding better on offense, finishing better around the rim (improved 2pt shooting) and holding onto the ball better (lower TO%). Add it all up and his offensive rating is on the upswing and I believe the best is yet to come. We may not see many more performances like LSU, but I expect Terrence to be a rock the rest of the season.

There may not be a more boring player on the team than Doron Lamb and I mean that in a good way. Doron is Mr. Consistency: he shoots the ball well, avoid turnovers, and gets to the line. His assist rate has decreased as Teague becomes more comfortable initiating the offense but that doesn't concern me - Lamb should be a guy who is getting assists for his teammates, not the other way around.

Vargas hasn't played much and his numbers reflect that - hard to show improvement or decline when you're not on the floor. Eloy's role continues to be on the defensive side of things.

Like Lamb, Marquis Teague has been pretty consistent this year. In this case that's not quite as good. His free throw shooting continues to get better as the season moves along, but his assist and turnover rates haven't deviated much from where they were at the beginning of the season. That might constitute improvement when factoring in the overall increase in competition the last 8 games, but it is the next 8 that will tell us the most about how far Teague has come this season.

If Lamb is Mr. Consistency, then Michael Kidd-Gilchirst is his brother. Other than a swiftly dropping 3pt%, MKG has been as steady as a freshman can be this year. His long range shooting reminds me a lot of Jones' from last season: early on it was strong and looked like it might be a reliable weapon, but as the season progressed it steadily worsened to the point where it really is not a good option on this team.

What can be said about Anthony Davis that hasn't already been said? He hits his twos at a high rate, his free throw shooting keeps getting better, and he takes care of the ball. About the only disappointing thing in his game is his offensive rebound rate - he hasn't really improved it since the beginning of the season, but like Teague's assists and turnovers, maybe there is improvement in maintaining the same rate against better competition.

Kyle is a solid bench player. He hits his twos and his free throws, takes pretty good care of the ball, and will hit some threes now and again. Against zones he's become the guy who goes to the paint in the middle and I would think that would give him more opportunities to grab offensive rebounds, but he hasn't improved in that area. Kyle is one guy who could help UK be better on the offensive glass even though his game often takes him away from the basket on offense. Floor balance can be maintained by other players leaving him free to follow his own shot to the basket and grab a few more rebounds.