Duke defeated Kentucky last night 75-68. Here is a closer look at the statistics and what went wrong for the Wildcats.

Due to the lateness of the game, the postmortem I did for last night's contest wasn't particularly detailed or thorough, mainly because in closely-fought contests like this one, a lot of things were not really evident from the game itself. So we'll turn to the statistics and game replay to get a better view of what Kentucky must improve on.

First, the Four Factors to Winning via Statsheet.com:

The first thing I notice right away is effective FG%. Kentucky did a good job of making shots, but so did the Blue Devils, which is where our problems lie. If you are going to win, it's very important to win this statistic, and although Kentucky did by an insignificant amount, the fact is that they allowed the Blue Devils to shoot far too high a percentage. Last year in this game, the Wildcats held Kansas to 37.3 eFG%, but they were unable to hold down Duke.

Duke was efficient offensively both inside and outside the arc vs. Kentucky. Mason Plumlee made all but one of the 8 field goal attempts he took, and Duke shot a very solid 44% from the perimeter. The takeaway here is that the Wildcats needed to deny the Duke offense something, either a good 3-point of good 2-point percentage. They did neither. We'll get into the why in just a bit.

Continuing to ballhandling, Kentucky had 20% turnovers, which is too many but by no means horrendous. A team that plays like Kentucky does is going to have some turnovers, as Coach Cal has reminded us many times. With that said, Duke turned the ball over only 12% of the time, and that disparity helped give Duke some net extra possessions.

Which brings us to offensive rebounding%, our bugaboo against the Maryland Terrapins. Once again, the Wildcats lost in this statistic. They didn't get dominated and nearly doubled up like they did against Maryland, but the Wildcats narrowly lost the offensive rebounding battle. Combined with the turnovers, this gave Duke an extra 6 shots on goal, 57 to 51. That is more than enough when the eFG% is virtually equal.

Kentucky did win the FT rate battle narrowly. Neither team distinguished themselves from the line, and this statistic wasn't tilted enough in Kentucky's favor, combined with free throw percentages, to help much, if at all.

So in the statistical analysis, what it looks like to me is that Kentucky's problems were primarily on defense. UK's offense did not look smooth for most of the game, but it was relatively efficient. What was not efficient was the UK defense, because they allowed the Blue Devils to make shots from everywhere. To be fair to both teams, the Duke offensive execution had a lot to do with that -- they were much sharper and more precise in every facet of the game offensively. Plumlee did an excellent job of finding open shooters when Kentucky collapsed on him in the post, and the Blue Devils' perimeter players did an very good job, particularly in the second half, of making shots from the arc.

Many times Kentucky players recovered to challenge 3-point shots, but they were always a half-step slow, and Duke did a fine job of knocking down even challenged threes. It has not been unusual for the 3-point shot to hurt Kentucky in the John Calipari era, and this was another game where it did.

I think the most important lesson for Kentucky, based on the stats that I see, is this: this team must learn how to force good shooting teams like Duke to put the ball on the floor and win off the bounce. With shot-blockers like Nerlens Noel and Willie Cauley-Stein in the game, you have to force the opposing guards to make floaters and shots inside the the 3-point line, not outside. UK got much better at that last year after a slow start.

To me, this game looked a lot like the Indiana Hoosiers or North Carolina Tar Heels game last year. In both those games, the Wildcats gave up a lot of made 3 point shots, and failed to hold down either team's eFG%. The Wildcats went 1-1 in those two games on the strength of single individual plays down the stretch, one from Anthony Davis and one from Christian Watford. This game wasn't quite close enough for that, but it could have been very easily with just one or two plays going the other way.

What we're going to do here is take a look at a key problem for Kentucky that cropped up early in the second half, and was repeated several times. The first occurred with about 17:34 remaining in the half, and the second just a few seconds after on the very next Duke possession Here's the first example: 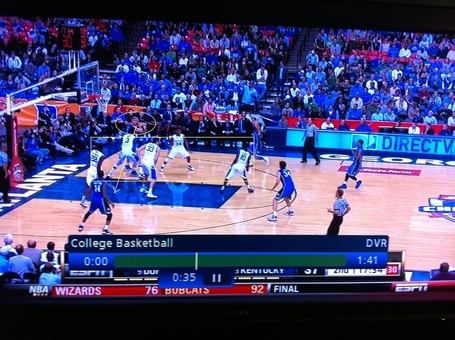 In this picture, I have circled Plumlee with the ball. He got a pass into the post from the right wing. There is a box drawn around Kentucky's defense, and you can see how compressed the defense is here. (if you can't see the lines, click on the picture for a better view). At this moment, Goodwin is within range of Ryan Kelly, although he's got two people in his area already.

Now, Plumlee is a solid post player, and a double-team might be in order, but surely we don't need 4 players within 5 feet of Plumlee to make a reasonable defensive effort. Look at all the open Duke 3-point shooters surrounding the arc. Kelly is open. Rasheed Sulaimon is open Goodwin is in a position to recover to Kelly, but nobody is close enough to challenge Sulaimon.

The result is predictable: 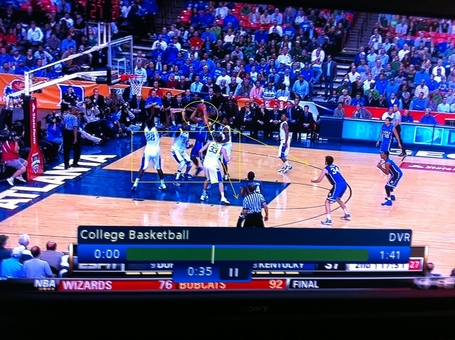 In this shot about 3 seconds later, you can see how open Kelly and Sulaimon (he's just in front of the foreground official) are. Plumlee will make a post move, kick the ball to Sulaimon, and Wiltjer will try to cover 10 feet to challenge, but has no hope to get there, and Sulaimon knocks down a wide-open three. Look how compressed Kentucky's defense is, and how many open options Plumlee has. Goodwin has gone down to help with Plumlee instead of staying out to challenge the shooters in his area.

This is not just bad defense by Kentucky, but excellent spacing by Duke. The one thing every team should know about Duke is that you are better off defending them one-on-one in the post and staying home on their shooters than allowing yourself to get into this situation.

The very next time that Duke had the ball, this same exact scenario played out again. Inside-out basketball. It was a sequence that gave the Blue Devils breathing room, and it was repeated about three or four more times during the second half with the same result.

If I was to point to one particular bit of defending that cost the Wildcats this game, it was their poor spacing when the ball was in the post. You have to remain within challenge distance of 3-point shooters when helping out on defense. At least two Wildcats should have been further away from the post area, and that didn't happen.

Defensive spacing takes time to learn in college, and Duke is really good at exposing this in a team. It's one of their calling cards on offense, and it's very effective, as the young Wildcats learned to their woe last night.