Kentucky Defense at the Half Season Mark

Share All sharing options for: Kentucky Defense at the Half Season Mark

The Kentucky Wildcats are preparing to open conference season against the South Carolina Gamecocks which makes this a good time to check in on the progression of the team and the players. Yesterday we looked at how the offense is coming along and today we'll do the same with the defense.

Just as with the offense, we'll look at how the team is performing in the 4 Factors and compare the results to what their opponents have done on offense this season. I'll then present some updated individual defensive numbers from the DSS.

One thing I need to note: the team-level numbers include all 15 games played this season. The individual DSS numbers however do not include the Louisville game as my attempt to record it ran into technical difficulties. I'm disappointed because as ugly as the UL game was, there was some mighty fine defense played by the Cats. 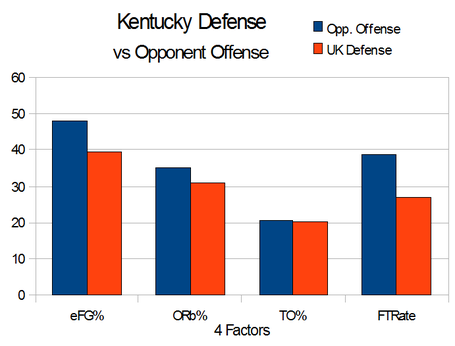 Overall there has not been much change in the quality of opponent offenses. Both the Opponent averages and UK's defensive averages are right around where they were 7 games ago. One place where the Cat's defense has declined somewhat is in forcing turnovers. The Cats have gone from forcing a few more turnovers than their opponents usually commit to now being almost exactly average. I think this is very much a function of Calipari's defensive philosophy - even going back to Memphis his teams have never been very big on forcing turnovers.

Instead, Kentucky makes it very difficult for other teams to make shots (in particular 2 pt shots) and very difficult to get to the line. Those trends have continued from the beginning of the season and there is no reason to think they will change. That's good though since Kentucky already has one of the best defenses in the country. That's not to say they can't get better, but we aren't likely to see dramatic improvement in these areas, unless it's in defensive rebounding maybe.

Now on to the players. An explanation of the individual stats can be found in the link above. I also want to remind everyone that Defensive Rating is strongly tied to the Team's Defensive Efficiency. So while it might look as though the players have gotten worse on defense, that may not actually be the case and I recommend thinking about the Defense Rating in terms of "better, worse, equal" than the Team Rating (lower is better).

The first line is the first 7 games of the season (up through St. Johns) and the 2nd line includes all games except UL. Min%, DefRB%, Block%, and Steal% all come from Statsheet. Everything else comes from the DSS.

A lot of attention has been focused on Darius Miller's 3pt shot this season, but what I haven't heard discussed as much is his declining Block Rate. In his first 3 seasons Miller was a very good shot blocker, but this season it is really down. It may be that he has changed how he defends players around the paint because you can see that he is still very difficult to score against on 2pt Shots. Everything else is roughly the same. Opponents have hit a few more threes against him, but 29.1% is still a very good mark.

For as much as Terrence Jones has struggled on offense, he is still a very good defender. His numbers are a bit worse across the board, but keep in mind that he didn't get to play against 2 of the cupcakes. In Jones' case, the team Defensive Efficiency is 83.8 for his 12 games, so he has been slightly worse than average overall. Perhaps my biggest regret in not having results for the Louisville game is Jones - he absolutely brought it defensively that game and made a lot of hustle plays and tough rebounds. I mentioned in a reply to jc in the post on offense that I have never bought into the "Jones has an attitude problem" talk and the biggest reason why is because he is so good on defense - I would think that if Jones was letting his attitude affect his play it would show up here long before it did on offense.

Just as on offense, Doron Lamb is the model of consistency on defense. I'm not sure if that is good or bad, but we certainly know what he is going to give the team on both ends of the floor. Lamb has maintained a good rebound rate for a guard and his defense on 2pt shots has improved.

It would be tempting to say that Eloy's defense has fallen off somewhat over the last 7 games, but he's on the floor so infrequently that it is hard to know how much of these results is due to "skill" and how much is "luck". I'm tempted to think it's more luck based than not, and in particular Vargas hasn't been quite as good on the defensive glass as he was early in the season. Better rebounding is what I would like to see going forward.

Like Lamb, Marquis Teague has been fairly consistent defensively and again like Lamb, I'm not sure if that is "good" or "bad". Teague has shown the best ability on the team to force turnovers and considering how few UK forces that is an accomplishment worth noting. I also think he is doing a better job staying with his man when he cuts through the paint and goes around screens, resulting in fewer shot attempts by his guy (and in turn lowering his Usage Rate).

In the results at the Quarter Mark I opined that Michael Kidd-Gilchrist's defense on 3 pointers was mostly a fluke and did not accurately reflect the quality of his defense. The results since then would bear that out. I have not noticed any difference in how MKG defends the 3 point line and that quality has shown through as opponents haven't hit as many contested shots as they did early on. He is also fouling less, though a 44.9 FT Rate is still high. The numbers here are not as jaw dropping as the improvements he's made on offense, but they do show improvement and there is no reason to think that won't continue.

Fun Fact: Anthony Davis has blocked a 3pt shot 5 times with 4 of those coming in the last 6 games (not counting UL). Davis continues to be a terror for opposing teams to score against and he is improving on the glass. Teams are having slightly more luck at hitting shots over him, but it's still not a smart thing to try. Davis is easily the Team Defensive MVP at this point in the season and he will probably be there at the end of the season too.

Still a ways to go for Kyle Wiltjer. EagleTDL mentioned in the post on offense that Kyle will get better on offense as he gets stronger and that holds true on defense. In a vacuum his shot defense really is pretty solid, it's only when compared to his teammates that it looks bad. Calipari's calls for better rebounding haven't resulted in any improvement in that area yet, but I'm sure they are working on it.