Kentucky Offense at the Half Season Mark

Share All sharing options for: Kentucky Offense at the Half Season Mark

The non-conference season is over and the Kentucky Wildcats are preparing for the tip-off of the conference schedule against the woeful Gamecocks of South Carolina. It's a good time to check back in on how the offense has performed against the defenses they have faced and see how the individual players have improved since the one quarter mark of the season.

As I did previously, we'll look at how Kentucky's offense compares to what their opponents are collectively allowing on defense as measured by the 4 Factors and how the players are doing in their tempo-neutral and shooting stats. Tomorrow I'll cover the defensive side of things with updated DSS numbers for each player.

First here is a chart showing how the UK offense is performing overall. Just as last time, the blue bars represent what the Wildcat's opponents are allowing on the season (through Wednesday's games) and the red bars are UK's own offensive performance. 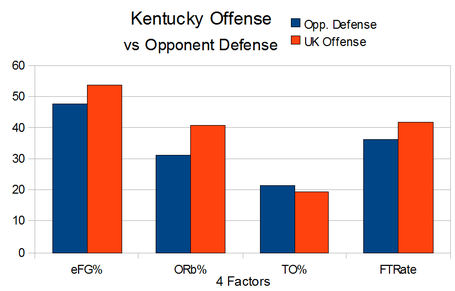 Kentucky is outperforming what an "average" team would do against the same set of opponents. In particular they are doing an outstanding job on the offensive glass as their opponents have been very good at rebounding. The differences in shooting and getting to the line are more modest but still quite good.

If you click the link above and look back at where the Cats stood 8 games into the season, the difference in shooting and getting to the line has remained relatively constant vs what opponents are allowing, but there is a clear improvement in offensive rebounding. As you can see below, Anthony Davis, Michael Kidd-Gilchrist, and Terrence Jones have all improved their rebounding on the offensive end of the floor.

Now for the individual players. Their numbers through the first 8 games are listed first so that you can see where they have improved and declined since the beginning of the season.

Over the last 7 games Darius Miller is shooting 39.4% from beyond the arc. Oddly, Miller has not been his usual excellent self at the line in recent games. He's always been a fantastic free throw shooter so there isn't anything to be concerned about. I fully expect him to hit his usual 80+% in conference play. Darius continues to shoot an outstanding percentage on his twos, but his assist rate and turnover rate are heading in the wrong directions. The TO% is almost entirely due to the Louisville game which I chalk up as a fluke. The drop in assist rate is more puzzling, but is mirrored by most of the rest of the team. That makes me think this is either related to how teams are adjusting to playing UK or how the offense is being executed, but I haven't noticed anything in particular on either account.

The effect of the Indiana game and the finger injury is readily apparent when looking at Terrence Jones' Offensive Rating - it has taken a precipitous tumble and the culprit is shooting and turnovers. He is compensating somewhat with better rebounding, but it's not enough. These numbers will improve as Jones heals and gets used to what he can and cannot do with a brace on his finger. In particular it would probably be a good idea for him to handle the ball as little as possible in the post until he gets better.

Doron Lamb just keeps rolling along. Excellent shooting at all spaces on the floor and a minuscule Turnover Rate are the ingredients for a terrific offensive player. Lamb is also getting to the free throw line more which is a real plus for such an excellent shooter. Lamb is such a consistently excellent player on offense that there really is not a lot to say - just sit back and enjoy it while he's here.

Could Eloy Vargas hit just a few shots inside? Ultimately it won't impact the offense that much either way, but it would be nice to see him score a bit more. Also, take care of the ball a bit better. Eloy is doing a little better on the offensive glass, he just needs to improve his ability to convert those second chances into points.

For all the ups and downs Marquis Teague has had this year, he's basically in the same place he was 7 games ago. His 3pt shooting has gone from solid to dreadful, but he has quietly improved his FT Shooting. Teague is making progress in getting the ball to teammates in position to score which is noteworthy given that everyone else seems to be going the other direction. Turnovers are up slightly which is disappointing - I thought they might be ticking downward a bit by this point in the season. I still believe in both Teague's ability and Calipari's coaching and think Marquis will make a lot of improvement as conference season goes along. On this team the only thing he really needs to avoid is turnovers - there are plenty of other guys who can score.

Michael Kidd-Gilchrist gets the award for most improved player: he is literally doing everything better than he was 7 games ago. Better shooting, passing, rebounding, and avoiding turnovers. MKG is just a fantastic player and there is no reason to think he's done improving. He should be getting a lot more Player of the Year talk.

Anthony Davis is the runner-up in most improved player. An 8 point bump in Offensive Rating thanks to slightly better rebounding, much improved Free Throw shooting, and decreasing turnovers. Davis can still be better on the glass - there is no reason why he can't be one of the best offensive rebounders in the country and if he makes that jump then UK will go from "difficult" to "impossible" to stop inside.

For as many shots as Kyle Wiltjer passes up, he still takes the highest percentage of shots while in the game of all the regulars. Kyle's outside stroke is getting better just as Miller's is. He's also getting to the line a bit more where he is a terrific shooter. Rebounding remains a weak point for someone with Kyle's height and when he is in for Jones or Davis he needs to step up that part of his game. But a lot to like and getting to the line in particular is really nice to see.