Defense Matters: Terrence Jones had a great game against Louisville

Share All sharing options for: Defense Matters: Terrence Jones had a great game against Louisville

A couple weeks ago as I watched the Kentucky Wildcats defeat Louisville Cardinals, it looked to me that Terrence Jones was having a terrific defensive game. I watched as he picked up a charge against Chane Behanan that led to Behanan getting his 2nd and 3rd fouls 4 minutes into the game. He rebounded in traffic and hustled to get steals. It was really exciting to watch and despite his struggle to score, I thought Jones' obvious hustle and good play at the defensive end would finally give him some positive press.

I should have known better.

You certainly can't ignore the missed shots, but instead of writers noting that Terrence made up for the misses with good play on defense, we got a lot of "Terrence Jones didn't show up again." Everyone likes to repeat the mantra that "defense wins championships" but I guess there are very few who want to actually acknowledge that play on the defensive end can be just as important as play on the offensive end when it comes to discussing actual games.

Part of that is understandable, good offense is easier to both see and appreciate than good defense. But Jones made several obviously good defensive plays throughout the game. I'm still not very good at paying attention to defense while watching games live but even I couldn't help but notice his positive play.

That is what this is about. Because as good as he looked watching the game live and as nice as 8 defensive rebounds and 3 steals look in the box score I am here to tell you he was even better.

The play that started it all

The most memorable defensive play of the game, and perhaps the most significant single play, was the charging call Jones drew against Chane Behanan which was soon followed by Behanan's third foul via technical*. It was a great play by Jones, but I want to draw your attention to what happened immediately preceeding the charge. While getting back on defense, Jones slipped and fell down prompting the ball to go into the post. Watching the game live, my immediate thought was "Crap, now he's going to score." But NO! Jones quickly got to his feet and back in position to draw the charging call - terrific effort that proved to be a harbinger of what he brought the rest of the game. 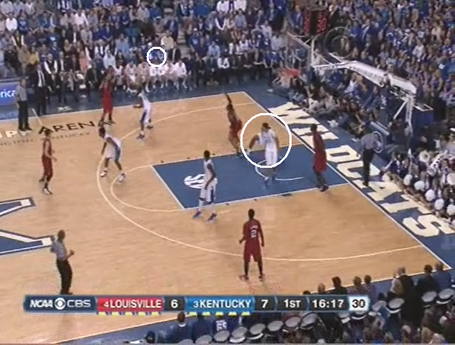 Jones is hard to see because Davis is standing in front of him, but you can see his leg sticking out where he has fallen. The ball is impossible to see, you'll have to trust me that it is where the smaller white circle is. Given that Jones was down while the ball was on the way to Behanan, it's a little bit amazing that he was able to get back up quickly enough to draw the charge.

*Michael Kidd-Gilchrist attempted the technical free throws which I found to be odd. MKG is a fine free throw shooter, but Doron Lamb was in the game too and Lamb is clearly the better shooter from the line. I presume Coach Calipari had his reasons, but I like to imagine that MKG is such an aggressive player that he simply walked to the free throw line on his own volition and no one - not even Calipari - wanted to tell him that someone else was going to take the shots.

There are defensive rebounds and then there are Defensive Rebounds. The former are missed shots that are automatically going to be rebounded by the defense - the only question is which player will be the one to collect them. The latter are the result of toughness, ability, desire, and good positioning (not necessarily in that order). By my count, 6 of Jones' 8 defensive rebounds were of the non-automatic variety - if he didn't get them then Louisville would have. 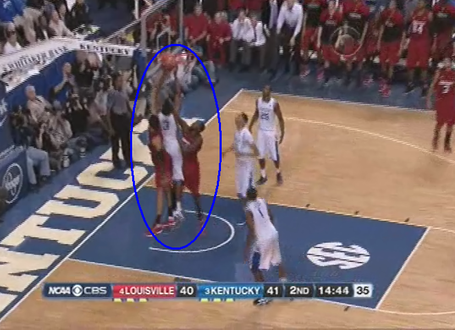 This turned out to be Jones' final defensive rebound of the game, and the picture pretty much speaks for itself I think.

Some of the best defense in games comes when things don't happen - when a dribbler is prevented from getting to the basket or when a big man is denied a pass into the post. There were a number of occasions when Terrence Jones played aggressive defense that prevented Louisville from getting the shot they wanted and forced the ball to some other area of the floor. 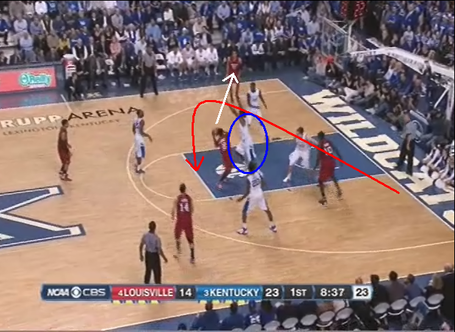 This play begins with Russ Smith on the baseline (beginning of the red arrow) being guarded by Michael Kidd-Gilchrist. Smith gets a screen from Gorgui Dieng to get some separation from MKG and comes around, receiving the ball at the Free Throw line Extended. He dribbles into the paint and is on his way to the basket for a layup.

Jones steps in to give help and cuts Smith off from the basket, stopping the drive. Smith uses a variety of pivots and fakes to try to get free for a shot, but Jones keeps his hands up and moves his feet to prevent an open look. Smith eventually tosses a pass to Jared Swopshire who misses a contested 3.

A perfect example of the proverbial "play that won't show up in the box score" and even in the DSS this won't get counted. Terrence did this kind of thing several times in this game - stopping shots from even being attempted and forcing the Cardinals to try something else on offense.

One bit of defense that does show up in the box score are steals and Jones had three of them in the game. In fact, Terrence contributed to forcing 4.5 Cardinal miscues, often collaborating with teammates to do so. 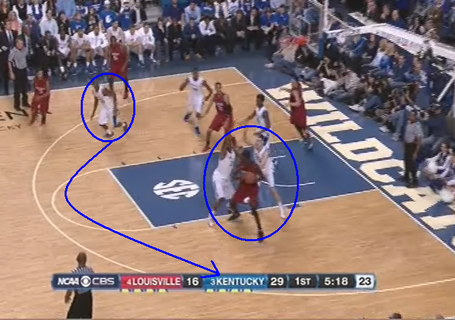 Kyle Kuric delivers a pass to Dieng, guarded by Kyle Wiltjer, from the wing. As Kuric then runs through the paint, Jones leaves his man and comes over to double team Dieng. Peyton Siva comes over to help by giving a passing angle and Marquis Teague stays with him. Just as Dieng starts to pass the ball back out to Siva, Teague darts in and steals the pass, although he wasn't credited with a steal. This leads to a long pass up the court to MKG who takes all of 2 long strides to go from the 3pt line to the basket for the layup, prompting a Louisville timeout.

I think this is my favorite play of the game because it featured multiple players forcing the turnover and ended with a great pass and basket. Maybe more than any other play in the game, this one was a true team effort from beginning to end. Jones is the one who really makes it work though. UK did very little double teaming in the game which leads me to believe that his decision to double team Dieng was one of personal initiative. It was a smart decision and well executed.

Another great play that doesn't show up in the box score are deflections and Terrence had a great one towards the end of the game that was all hustle. 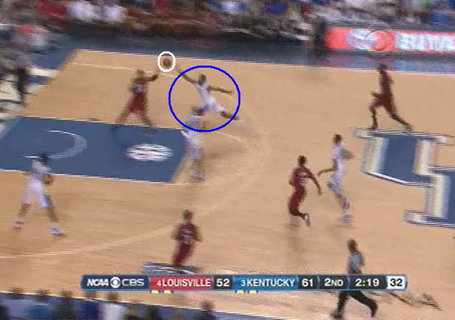 After a missed shot, Russ Smith picks up the ball and throws a long pass up the floor to Behanan. The play almost surely would have gone for a dunk, except for Terrence Jones who comes flying in and deflects the ball out of Behanan's reach and out of bounds. Louisville still eventually scored on the possession with a couple of Russ Smith free throws, but Jones prevented the easy dunk and forced Louisville to take the ball out of bounds and score against UK's half court defense.

Putting it all together

I hand picked the above 5 plays to highlight some of the ways that Terrence Jones played great defense in this game. They weren't cherry picked however - they are indicative of an overall effort that resulted in Jones receiving the best defensive grade for this game when I charted it for the DSS.

Here is another way to put it. We know Jones did not have a good offensive game, managing an Offensive Rating of 35.6 points per 100 possessions. On defense, Jones accounted for a total of 12 possessions and 3 points allowed - a 24.7 Opponent Offensive Rating. If the entire UK team had played offense and defense the way Jones did, they still would have won the game.