Share All sharing options for: Twitter Fight After the Kentucky at Auburn Game Between Matt Jones and Kyle Tucker

This morning, I checked my Twitter feed, as usual, to see what the chatter was all about. I have a list of particular people I pay special attention to for news without all the extra chatter of the many friends and acquaintances I follow. These are people like newspaper reporters, ESPN guys, the Rivals site, the Scout site, KSR and the like.

This morning, I open up my feed and see a list of posts from Kyle Tucker, the recent hire by the Louisville Courier-Journal to replace the departed Bret Dawson, who covered the UK sports beat, apparently blasting Kentucky Sports Radio's Matt Jones for a tweet he posted shortly before. Follow me past the jump to see the sequence. 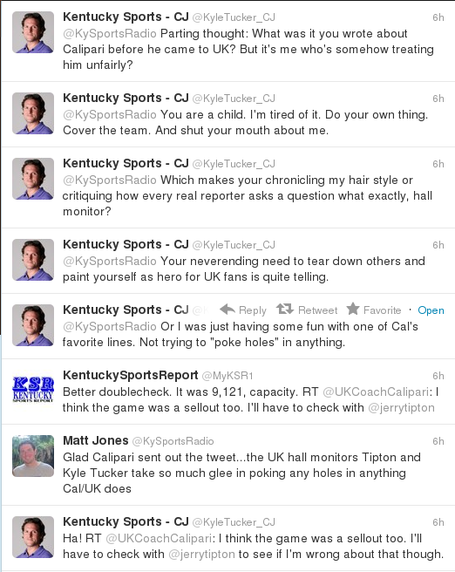 I thought it was a little bit unusual to see a sequence like that without any commentary from Jones - Matt is not exactly known for being a shrinking violet when he is challenged like that. A closer look at my Twitter client reveals a conversation between the two of them which no longer appears in the Twitter timeline of Jones, which suggests those tweets have since been deleted. Here is the entire conversation, in reverse order (i.e. the tweet that started it all is on the bottom):

KySportsRadio: @KyleTucker_CJ I wrote bad things about him as an uniformed fan. Same as you believe I am

KyleTucker_CJ: @KySportsRadio Parting thought: What was it you wrote about Calipari before he came to UK? But it's me who's somehow treating him unfairly?

KySportsRadio: @KyleTucker_CJ haha I never had you pegged for an internet tough guy Kyle. I really didnt

KySportsRadio: @KyleTucker_CJ and my comments on your hair are always said with envy. I would kill to be able to grow long hair and it not be awful

KyleTucker_CJ: @KySportsRadio You are a child. I'm tired of it. Do your own thing. Cover the team. And shut your mouth about me.

KySportsRadio: @KyleTucker_CJ Yeah I will take the role of hall monitor for the media...u guys do it for others and HATE when it is done to you.

KyleTucker_CJ: @KySportsRadio Which makes your chronicling my hair style or critiquing how every real reporter asks a question what exactly, hall monitor?

KySportsRadio: @KyleTucker_CJ I was just noting the glee with which u and Jerry seemed to dispute his comments. Very hall monitor-esque

KyleTucker_CJ: @KySportsRadio Your neverending need to tear down others and paint yourself as hero for UK fans is quite telling.

KyleTucker_CJ: @KySportsRadio Or I was just having some fun with one of Cal's favorite lines. Not trying to "poke holes" in anything.

KySportsRadio: Glad Calipari sent out the tweet...the UK hall monitors Tipton and Kyle Tucker take so much glee in poking any holes in anything Cal/UK does

First of all, I have no idea of the back story, if there is one, between these two guys. Jones and Tucker are no doubt acquainted from covering Kentucky games, and whether this was Jones just popping off for a dimly-perceived slight to excite his followers (which many of us bloggers do, from time to time, including me), or if there is genuine bad blood between these guys, I have no idea. It does seem, though, that Tucker made an incredibly benign comment in which I was unable detect any anti-Calipari intent.

I'm not really sure why Matt felt the need to delete his half of the conversation, if that is in fact what happened. It could be something else, I suppose -- the Internet is a weird place, and strange things happen all the time.

But whatever the case, to my mind, Tucker said or implied nothing at all untoward about Calipari, and in my view from what I am able to recreate from admittedly strange and possibly incomplete evidence, Jones started a fight that he had no business starting. I carefully read Tucker's articles on the Courier-Journal, and I have never seen anything but a very professional young reporter doing his job, and doing it well. In my view, he is significantly more active than Dawson was on the UK beat when he was at the CJ, and Tucker has been nothing but fair to Calipari in his public utterances, insofar as I am aware.

On the other hand, who knows what Kyle really thinks of Coach Cal? Not me. But as a fellow Hilltopper and he gets a bit of slack from me given what I have seen from him, and being from Clarksville doesn't hurt -- that was my favorite Tennessee town in college because it was just across the border, and the drinking age in the Volunteer state in those days was 18 vs. 21 in Kentucky. We had a lot of good times down there at a place called the Water Company, I believe, which was a big bar with all kinds of interesting features. We also frequently feasted in a Mexican restaurant known as El Palacio, which was just awesome. But I digress.

So what was that all about? I wish I knew.