Rodney Purvis, who decommitted from Louisville earlier this year had been giving Cardial fans hope recently that he may come home.  Well, he did come home -- to the North Carolina St. Wolfpack.  Congrats to Mark Gottfreid for the huge commit.

Kentucky coach Joker Phillips has experience winning on the bayou.  When he was a player at Kentucky, UK went down to Deaf Death Valley and defeated the Tigers 21-13.

The UK coaches also had an interesting strategy for simulating the noise at Tiger Stadium:

That's why Wildcats coaches had a speaker system strapped to the back of a utility vehicle during Wednesday's practice. It blasted recording of crowd noises.  Wildcats quarterback Morgan Newton and the offense tried to communicate.

Well, that's one way to do it.  It might even work.

How about the Big Cuz, showing off his handle, his ups, and his jumper:

In other news, John Calipari says that the "one and done" rule is messing up our opportunity to win multiple, consecutive national championships.  Via KSR:

"It’s not the ’70s," he said Friday at Rutgers at the first annual clinic to benefit "In Brayden’s Eyes, The Brayden Carr Foundation." "Could you imagine if I had these guys three and four years?  It would be UCLA."

Can you imagine if John Wall, DeMarcus Cousins, Eric Bledsoe and Daniel Orton had all come back for their sophomore year?  Do you realize they'd all be juniors right now like Jon Hood?  Of course, if they came back, we'd never have had Brandon Knight, although we might have had Terrence Jones and Doron Lamb.  This  year's recruiting class would mostly be elsewhere, though.

Randall Burden and Ryan Tydlacka are the captains for the LSU game.  Both had good games against Florida, I suppose, comparatively speaking.  Saying that anyone had a "good game" against a team that beat you 48-10 just seems wrong to me.

Andy Katz provides a "lessons learned" article from the Tennessee basketball scandal courtesy of the Ice Miller legal team, who sent it out to some of their clients.

Most of this stuff is "Duh" kind of observations, like:

2) Providing false, misleading, or incomplete information to the enforcement staff is an extremely serious violation, even when an interviewee subsequently corrects the record.

Heh.  Yeah, especially when the NCAA investigator is holding a picture of you at  a residence everyone involved knows is yours, and has already spoken to the Craft family.  I mean, anyone who allows themselves to be jackpotted like that has probably killed a few too many brain cells to be a head coach. 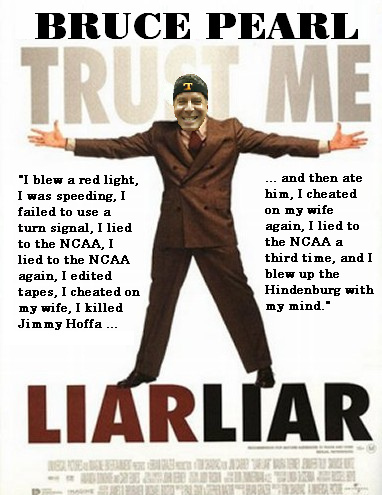 It's no laughing matter that we have to go to LSU tomorrow and play the top team in the country.  I was hoping that by this point in the season, the Wildcats would be somewhat competitive... but no.  We never know when the light will come on, but so far, the switch is stuck firmly in the OFF position.

I think at this point, I'm feeling like the lamb that was staked out as bait (or a sacrifice) to the hungry, man-eating tiger.  It's not a good feeling.  Not at all.

That's the bad news.  The good news is ... well, okay, there really isn't any good news except for the teeny, tiny odds that UK can win this ball game because it has to be physically played on the field, rather than in people's minds.  If you have a scanning electron microscope, you can see those odds from here.

And The Valley Shook sums it up thus:

Typically, I would be talking about how this is still an SEC game and how it sets up as a perfect letdown game in a lot of ways (morning kickoff, sandwiched between two big games, team a little banged up), but the reality is simply that Kentucky is not a good football team. They're 2-2 this season and it's taken some good fortune because every single opponent has outgained the Wildcats this season. That includes the likes of Western Kentucky and Central Michigan (by 44 and 39 yards respectively), Kentucky's two wins.

There's nothing like seeing your team reduced to one glaringly obvious and painful statistic.

Morgan Newton & Co. simply have to perform at previously unseen levels for Kentucky to even score on the LSU defense.  If we continue to bring our current level of proficiency, this may be the first NCAA game in recent history where one team plays a whole football game with negative total yards.  That sounds silly, but given UK's performance so far, it is a small but not insignificant possibility.

That's all for now.  Ken will have the pre-game along in a little while.  Enjoy.